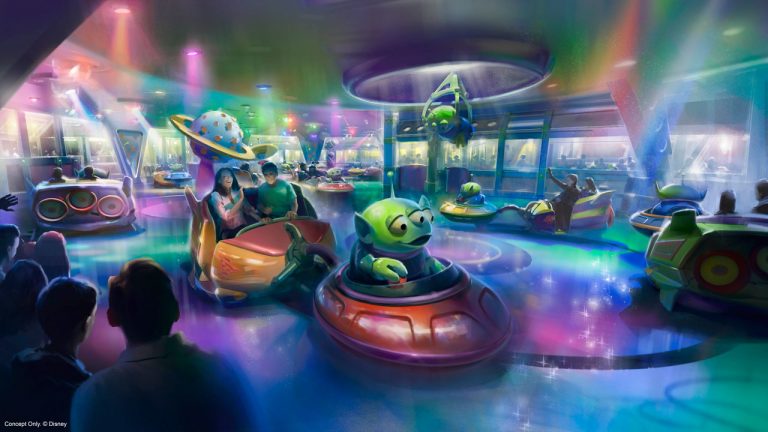 Are you getting excited for Toy Story Land at Disney’s Hollywood Studios? One of the new attractions for this area themed after Andy’s backyard is the Alien Swirling Saucers. Today, Disney shared some unique concept art to showcase just what the attraction will be like, and I have to say, it definitely looks fun!

The Alien Swirling Saucers attraction, for those who don’t know, will have the aliens have powering up their saucers and you’ll get to climb into a toy rocket. Hang on as the aliens lead the way. All this takes place while electronic space music plays, providing an intergalactic soundtrack. Oh, and if you’re really lucky, you just might get chosen by the claw! (I’m super curious about what this means, cause Disney keep emphasizing it.)

Oh and Disney also wanted the rumors quelled. (Ahem….Len and Jim. 😉  )  The park is still, for the time being, going to be known as Disney’s Hollywood Studios.

For those waiting impatiently to find out when Toy Story Land will actually open at Disney’s Hollywood Studios, well, that’s still up in the air. According to Disney, the answer to that question is still summer.

Get a Sneak Peek of Moana at Disney’s Hollywood Studios