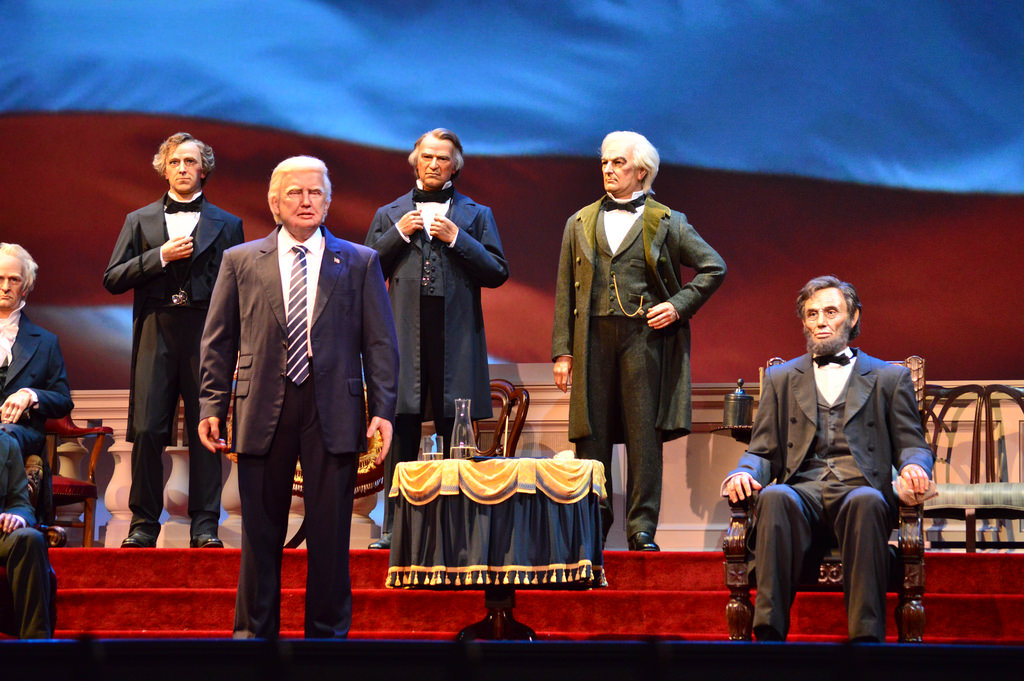 This week’s SATURDAY SIX takes a look at LIBERTY SQUARE in Disney’s Magic Kingdom!  In the past few months we’ve started taking a look at lands inside the most popular theme park in the entire world. First we made a stop in Frontierland, an area dedicated to the mythology of America’s wild wild west. Then we arrived in Tomorrowland, an area which doesn’t know what it is, but just might be the best land in the entire park. Now we’re going to head in LIBERTY SQUARE, the one land in the Magic Kingdom themed around real events, real places, and – most importantly – real people.

Many guests quickly walk through Liberty Square on their way  to Adventureland or Fantasyland, but we here at the SATURDAY SIX find a lot to love about the parks’s smallest land. It has mystery, humor, and a true sense of history that you can’t find anywhere else. Today we’re going to take a look at some of our favorite parts of Liberty Square, and let’s kickoff the countdown with…

While it has recently become a source of controversy, The Hall of Presidents is an opening day attraction at the Magic Kingdom that was once considered an “E-ticket” because of its advanced technology. The “queue” is a large indoor room, filled with artifacts from former presidents. There is also a Presidential Seal on the floor, making the Magic Kingdom one of the only places in the world with a seal displayed outside of the White House in Washington, DC.

Once seated in the theater, guests first watch a short film on the history of the United States, spotlighting the actions of many of our presidents. This includes a segment on the Civil War that comes complete with an appearance on stage by an audio animatronic Abraham Lincoln. The show stopping moment is still to come though, and it arrives when the film ends and guests are introduced to every single American president.

For years I have read stories and listened to podcasts that have talked about guests at the 1964 World’s Fair. It’s been said that many guests reported the Abraham Lincoln animatronic Disney had on display was actually a real man. Seeing these animatronics get out of chairs and talk in 2018 is a true wonder to behold, and I finally understand what it must have been like for someone in the ’60s to see the same thing.  “Disney magic” is a term that has become overused, but this show has it.

Like the Walt Disney World Railroad, the Liberty Square Riverboat offers a view of the park guests don’t get to see while they are walking it. Traveling around the Rivers of America, the Liberty Belle allows guests some unique views of some of the most well known attractions in the world, along with a surprise or two along the way for those looking at all the wonderful details throughout the journey. The riverboat is an important part of American history, as people still needed to travel and ship goods to merchants, but cars and planes were still years away from being invented.

Besides, isn’t being in a boat always better? ‘Nuff said.

In 1976, to celebrate the 200th anniversary of America declaring its independence, 50 replicas of the Liberty Bell were made and sent out to every state. According to Disney legend, Pennsylvania already having the real Liberty Bell, didn’t have much use for a replica. On July 4th, 1989, Pennsylvania’s replica bell made its way to the Magic Kingdom, making Florida the only state to have two of the replica bells (the other is located in the state capitol of Tallahassee.) The Liberty Bell is an icon to this country in the same way that Cinderella Castle is for Magic Kingdom or Spaceship Earth for Epcot. As its name implies, the Liberty Bell stands for being free from oppression. Throughout the years anti-slavery groups and the women’s suffrage movement have used the bell as a symbol of their protests.

It’s worth noting that Florida has a third replica of the Liberty Bell. This one is located in Melbourne, Florida. In 1976 the school system of Brevard County raised money to purchase a replica, and had their bell cast by the same company in London, England who cast the original Liberty Bell back in 1751.

Without any over-the-top Disney theming or characters, many guests walk past Liberty Square not realizing how much there is to look at. One of our favorite details can be seen in the window of one of Liberty Square’s buildings. If you look closely, you will see two lanterns and this is referencing the poem Paul Revere’s Ride by Henry Wadsworth Longfellow that included the line One, if by land, and two, if by sea. The two lanterns indicated that the British were coming “by sea” across the Charles River, and not by land via Boston Neck. Paul Revere created these signals in case he was prevented from leaving Boston and making his famous ride alerting the Massachusetts country side.

There is a sign almost hidden in a corner that shows four fists. This was actually the sign of the Philadelphia Contributionship. Think of it as an early form of home insurance, and it was created by Benjamin Franklin as a marker to let the firemen known which buildings were a priority. One of the most amazing details is the actual streets that guests walk upon in Liberty Square. While most of the pavement is a reddish color, there is a brown ribbon of pavement  – several feet wide – the goes around the entire area as well. This is referencing the fact that there was no indoor plumbing during the colonial period and that our forefathers would take their waste and just dump it into the streets. That’s right #Millenials,  eating Tide Pods may be the latest weird thing, but we are and always will be ‘Murica.

The Muppets Present…Great Moments in American History is filled with the perfect Muppet humor that can make both adults and children laugh out loud. There are several shows presented throughout the day and guests will see one of two stories: the Declaration of Independence or the Midnight Ride of Paul Revere. In the Declaration of Independence show you have Muppets playing various signers of the legendary document, including Kermit as Thomas Jefferson, Gonzo as John Adams, and Fozzie Bear as Benjamin Franklin. The highlight just may be Miss Piggy playing both George Washing and King George III.

Simply put, the Haunted Mansion is one of the greatest theme parks attraction ever built. It is a tour-de-force of Walt Disney Imagineering and contains many elements we may never see again in the stateside parks. In an age of quick thrill “experiences,” the Mansion is a 10 minute dark ride in which the queue and entertaining pre-show add an invaluable amount of atmosphere. It uses old school tricks instead of 3D screens. The Mansion is a completely original concept, and features one of the most memorable songs in the Disney songbook with Grim Grinning Ghosts. Despite many “scary” elements, it also expertly uses humor to help make the ride a rite of passage for a younger guest. There doesn’t seem to be an inch of the Haunted Mansion that isn’t completely themed. Details inside other details. Mansion – along with Pirates of the Caribbean – will always be the benchmark of what theme park attractions can and should be.

One of the most recent additions to Liberty Square is Memento Mori, the dedicated gift shop to Haunted Mansion. Inside there is a lot of great Haunted Mansion merchandise, including the chance to have yourself “transformed” into a ghost. This unique photo opportunity lets guests immortalize their corruptible mortal state and reveal a ghostly visage….

One of the photos your family has to get during your WDW trip is a shot in the Liberty Square pillory. Have some fun with the pillory and don’t forget the stocks right next to it. For families that go every single year, it can be fun to see a passage of time through photo ops like this.

So there you have it: Six Reasons We Love LIBERTY SQUARE! See you next weekend for the latest installment of the SATURDAY SIX, where we’ll look at something fun from the world of Disney and Universal. If you enjoyed yourself, be sure to check out The Magic, The Memories, and Merch! articles, or, for your listening pleasure, check out the E-Ticket Report podcast. You can also follow Your Humble Author on Twitter (@derekburgan).

6 Reasons We Love TOMORROWLAND in the Magic Kingdom

Special Thanks to crack staff photographer Brandon Glover, photo wunderkind Mike Sperduto, Disney photographer Icon Tom Bricker of Disney Tourist Blog, Tim Grassey of WDWThemeparks.com,  and blogger to the stars Megan Stump for their invaluable assistance with this article. Be sure to also check out Brandon on The Park Blogger podcast with goofballs co-hosts Aengus Mackenzie and LitemAndHyde , while fellow Potterheads may enjoy Meg’s work on the Central Florida Slug Club.

This Month at Disneyland Resort: August 2012 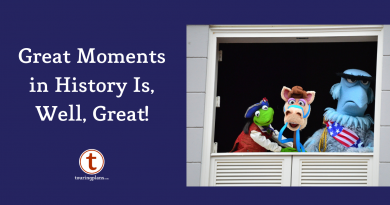 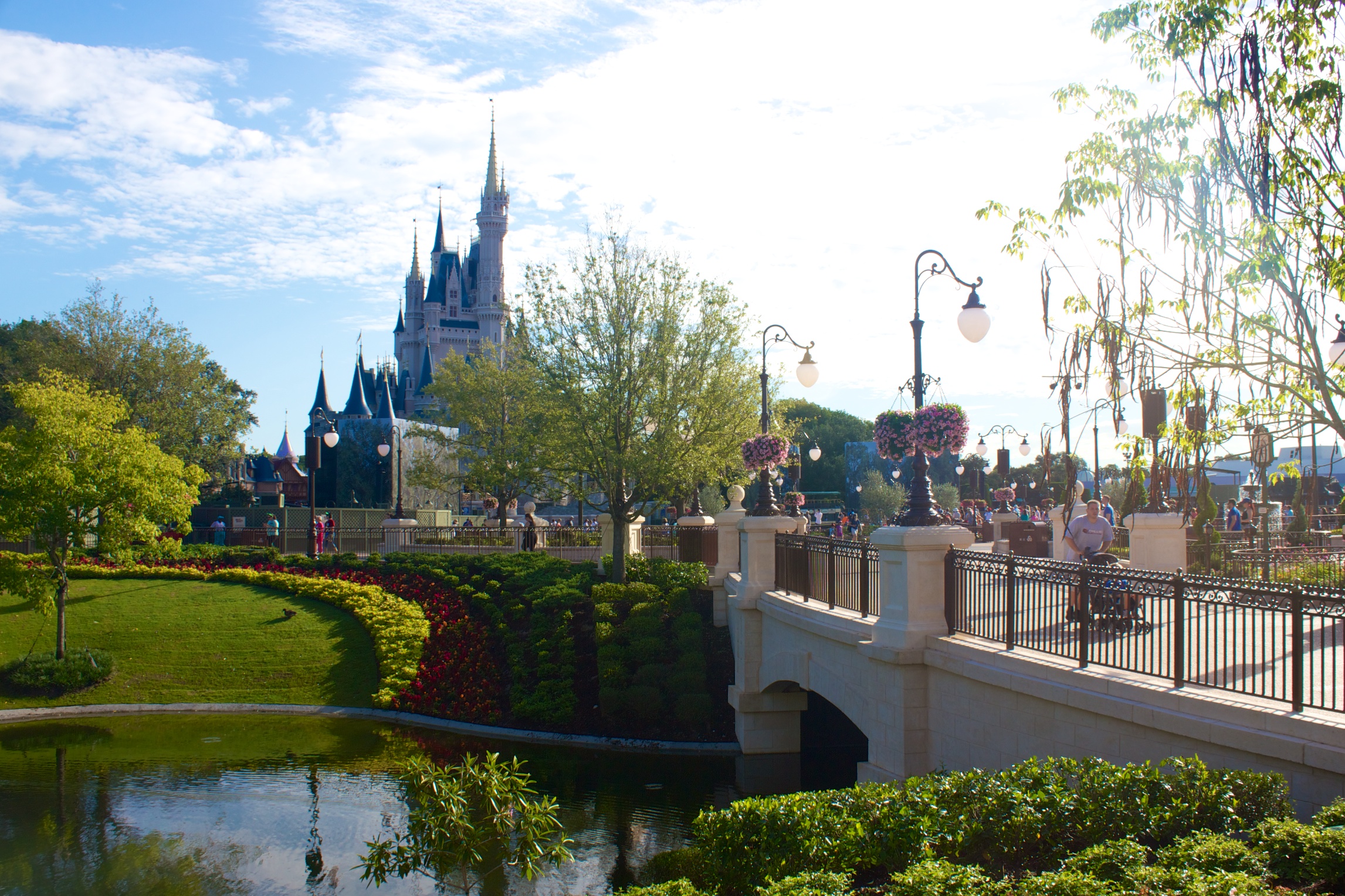