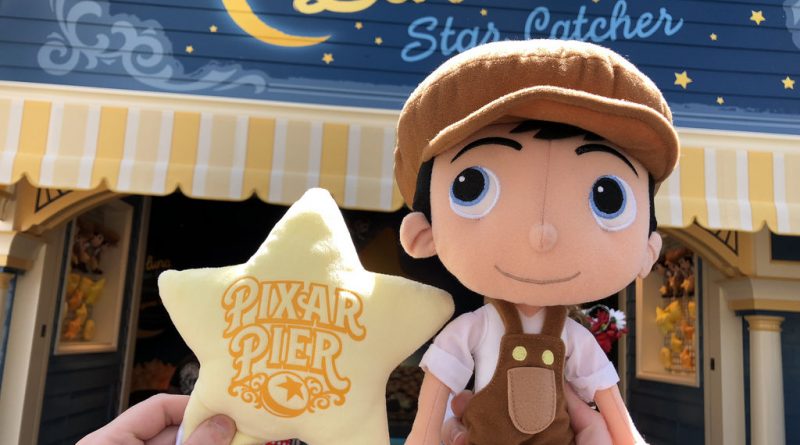 This week’s SATURDAY SIX takes a look at PIXAR PIER in Disney California Adventure! As huge fans of the Pixar film library, we’re always looking forward to seeing more Pixar in the theme parks. This summer we here in Florida got Toy Story Land, but out in California they got a land filled with references to not only every Pixar movie, but even some of the Pixar shorts that we all love. Today we’re going to take a look at some of our favorite parts of Pixar Pier, and let’s kickoff the countdown with…

Churros are ubiquitous at theme parks. Not only are they one of the most iconic snacks at Disney, but they are even used for comic relief in an attraction over at Universal (when Sideshow Bob uses one of “yesterday’s churros” as a weapon on The Simpson Ride.) That said, to date pretty much every single churro cart found in America is the most mundane point of sale you can think of. Corn Dogs get the fancy Little Red Wagon at Disneyland. Disneyland popcorn machines have tiny characters turning the popcorn. Churros? Their carts are about as elaborate as someone trying to sell you audio equipment out of their trunk. Thanks to Pixar Pier we now have an E-Ticket Churro cart with Señor Buzz Churros. Referencing the hilarious moment in Toy Story 3 when Buzz Lightyear was set to Spanish mode, this cart also continues the California tradition of offering guests a unique flavor with Caliente. The new flavor tasted like a Hot Tamale candy, while the more standard Cinnamon Sugar Galaxy Churro even had green and purple sparkle to it thanks to the liberal application of themed sugar.

The concept of a Poultry Palace – which comes from the fantastic Toy Story Toon “Small Fry” – is actually better than execution, but there are still some wonderful elements to be had. When fans first saw that a Poultry Palace stand would be coming to Pixar Pier in the original concept art, the dream was that it would offer some of the next level bonkers menu items that were listed in the credits of the Small Fry short. These items included the “healthy” fried chicken salad, a gauntlet of french fries, and even “the mace” (which was a fried chicken drumstick with spikes coming out of it.) The actual Poultry Palace in Pixar Pier has an extremely limited, and mostly boring menu (including corn on the cob, a turkey leg, and a “large” bag of chips that is a medium at best.) However, one item on the menu comes in a box that is reminiscent of the old Disney Happy Meal boxes. The chicken drumstick box sells for $9.99 and comes with three drumsticks and a side of coleslaw. The food is decent, but the box it comes in is GREAT.

The design and little touches of the Poultry Palace are also incredibly fun, including the juice box and Zurg toy on one side, and a wonderful “ad” for other collectible toys.

At $6 a pop, a normal person’s first thought – even in a theme park – would be “that better be one heckuva good cookie.” One bite of a Jack-Jack Cookie Num Num and you’ll be yelling “shut it dooooooooown!” in sheer glee. Served warm (and with the option of buying ice cold milk to go with it), thick, and full of chocolate chunks, this may be the best cookie ever served inside a theme park. The fact that it references the Incredibles 2 film along with being used in the story for the nearby Incredicoaster is a bonus.

As a person who buys way too much theme park merchandise, I’ve never been a “balloon guy.” I’ve seen some balloons I’ve liked over the years, including the classic Mickey-head inside a balloon and the new LED balloons at Universal. But I have yet to see a balloon that I would actually want to bring back to my hotel room, and then drive with it back to my house. That was until Pixar Pier unveiled the UP balloon ($15.) Based on one of my favorite Pixar films, this balloon takes cuteness to a new level and is just so dang charming.

Many theme park guests HATE carnival games at Disney Parks. I think this is because many of them only see the ones at Fossil “Fun” Games at Dinoland USA, which are horrible. Carnival games at theme parks are one of the hills I will gladly die on. I think they can be a lot of fun for both kids and adults to play, and the best ones are highly themed that offer prizes which you can’t buy in a gift shop (but would if they sold them.) The themed games at Pixar Pier are terrific, but some of the prizes are out of this world! Not only is there a game based on La Luna (one of our favorite Pixar shorts,) but has various La Luna-themed prizes to win. Just an incredible deep dive and one that Disney didn’t have to do. There are other games themed to Wall-E, Toy Story, and even Heimlich from A Bug’s Life.

There are some dining experiences at Disney that I think every guest needs to try at least once. Sometimes the food might not be worth what you are paying, but there’s just something about sitting in a car at Sci-Fi Dine-In, getting some sass at 50’s Prime Time, or just being in the main dining room at Be Our Guest Restaurant that feels special. The Lamplight Lounge in Pixar Pier is a must-do for not just Disney or Pixar fans, but anyone who appreciates art and the artists behind the drawings. Spoiler Alert: the food and drink options are actually good here too, but you need to go just to take everything in. Creative details abound everywhere you look, from the chandelier all the way to the signs for the restrooms. It’s like being in a Pixar museum in which you can also order some great items to snack on (with the potato skins – yes the potato skins – and ratatouille being true standouts.) Lamplight Lounge is a venue that from top to bottom was created with TLC, and it shows.

So there you have it: Six Reasons We Love PIXAR PIER! See you next weekend for the latest installment of the SATURDAY SIX, where we’ll look at something fun from the world of Disney and Universal. If you enjoyed yourself, be sure to check out The Magic, The Memories, and Merch! articles, or, for your listening pleasure, check out the E-Ticket Report podcast. You can also follow Your Humble Author on Twitter (@derekburgan).

6 Reasons We Love Sailing on the  DISNEY CRUISE LINE

6 Things Your Family Needs To Pack For A Disney Vacation

Special Thanks to our spirit animal Brandon Glover, the Sommelier of Tony’s Town square @ViewsAndQueues, the SAT SIX Fun Squad of Parkscope Joe and Nick, the only man who walks through Carsland with BTTF auto-lacing shoes Guy Selga, and blogger to the stars Megan Stump for their invaluable assistance with this article. with goofballs Aengus Mackenzie and LitemAndHyde. Potterheads may enjoy Meg’s work on the Central Florida Slug Club.

One thought on “SATURDAY SIX: 6 Reasons We Love PIXAR PIER”