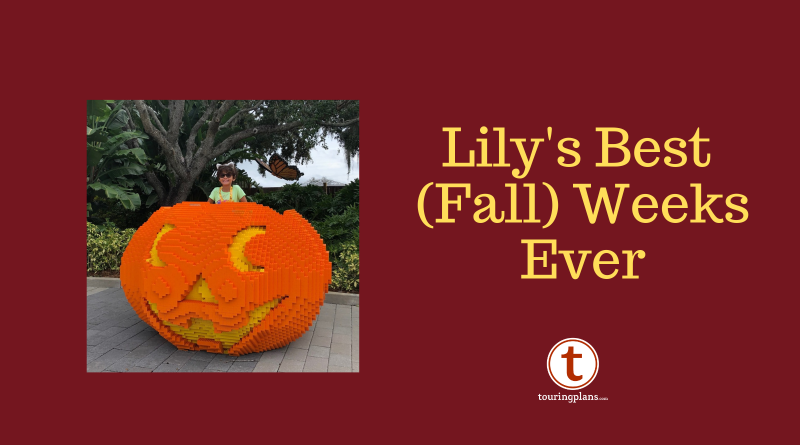 Hello, this is Lily again. You may remember me from best summer ever. Now I am back in school in third grade. That has made it really hard for me to go to Disney, but I managed to go this fall to Disney and Legoland. Here are some of the things I did in my Best Fall Ever. This is me during Food and Wine at the Wreck-It Ralph-themed playground. I had a lot of fun there. At the playground, there is a unique thing you can use that is kind of like a turnstile. It’s because if you keep pushing on it, it will start moving and act like a gate. Also, there are two speakers that you can talk into and the other side will receive it. I went there multiple times to play. Outside of the playground, there is a food booth that sells pancake milkshakes, which are vanilla malt milkshakes. The reason why it’s pancake milkshake is because in the new Wreck-It Ralph movie there is a scene with a pancake and milkshake game. I liked it a lot, and would get it a lot if there wasn’t another dessert that I really liked more. In the festival center, there is a silk marbling stand. This is me making a table runner. First, you put a special kind of water called magic water in a container. Then, you put special kinds of paints on the water. When you’re done, you put silk on it and the paint sticks to the silk. This is what I made! Also in the festival center, there are chocolate displays. I really like them. This one is my favorite of the year! Speaking of chocolate and my favorite of the year, this is my favorite dessert in all of Food and Wine. It is a chocolate truffle. They make the truffle with liquid nitrogen. That makes it nice and cold. Then they use a hammer to break it apart. They put on caramel drizzle and almond snow. It tastes deeeeelish! (Or else why would it be my favorite?) This is Hide & Squeak, like the Easter Egg hunt in the spring, it is a scavenger hunt. Instead of Easter Eggs, you have to find Remy with certain ingredients. I went to Epcot a lot in the fall. One night, this happened. Isn’t it pretty? (Both pretty neat and pretty beautiful.) Something else that was neat is that I found a wall at the right time of day that I was able to make my shadow hold hands with itself. One of my favorite things to do at night is go to the fountains near the Imagination pavilion. I love to run around there. Epcot is so pretty at night! The other big thing I did this fall was go to Legoland Beach Retreat. This is the room, and it was decorated like the beach but with Legos! By the pool, there is a beach. I had a lot of fun digging for treasure and hiding treasure, too. In the main area of the hotel, there is a giant Lego sand castle that you can build on to. The rides and attractions are really cool. This is like the Speedway in Tomorrowland, but without any track!! Fall is a great time to go to theme parks on the weekend. I had a great time this fall, and now I am getting ready for winter. See you real soon with more exciting adventures!