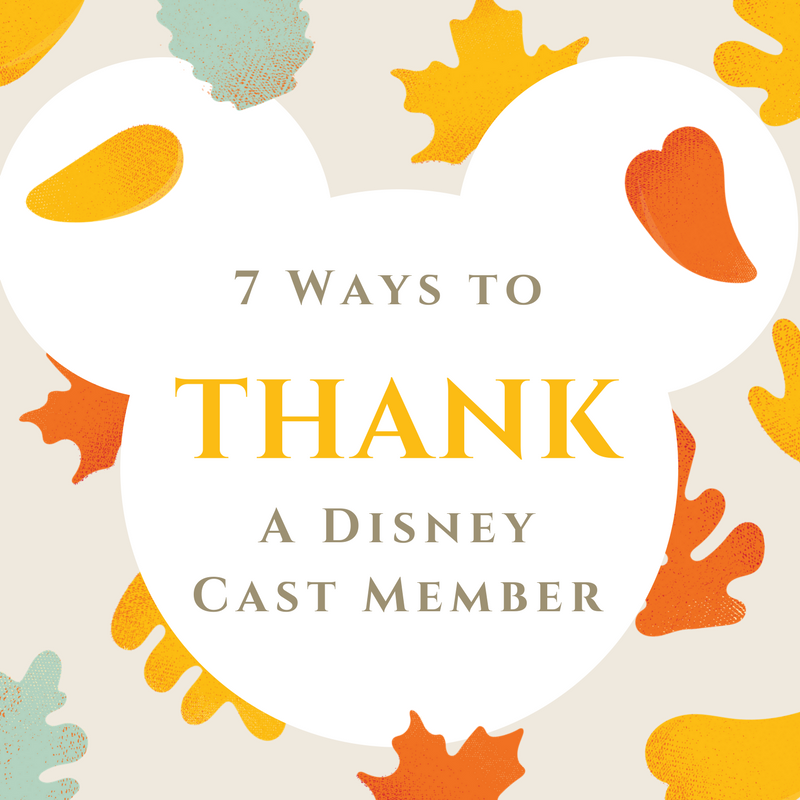 With Thanksgiving nearly upon us, we thought it would be the perfect time to reflect on how thankful we are for Disney Cast Members. While most of us will pass the holiday with our family and friends, gorging on food and watching too much television, many of them will spend their day at work, keeping thousands of guests safe and happy. And it’s not just during the holidays. Whether it’s a beautifully sunny day or the day a hurricane is forecasted to arrive, Cast Members are always there to keep the magic alive. I’m sure anyone who has vacationed at Disney World had at least one memorable experience with a Cast Member, if not more. So for the next time you’re at Walt Disney World, here are seven ways to thank a Walt Disney World Cast Member.

If you want to thank a Cast Member in the most meaningful way possible, the best approach is to leave comments with Guest Relations. Disney prides itself on customer service, so feedback left with Guest Relations is a big deal in the Disney universe.  Not only do the comments get back to the Cast Member, but they also go to their manager and to their employee file. Comments can even be used for internal contests or in performance reviews for things like promotions. The only down side is that this is one of the most time-consuming methods. Depending on how long the line is for Guest Relations, you could be waiting a while on top of the time it takes to give the feedback. And before you say anything, don’t worry. I know what you’re thinking – ‘Yay, another line!’ Sadly, we haven’t optimized the wait times on that. Yet.

If the line for Guest Relations is too long or you forget to stop on your way out of the park, you can also e-mail your experience to the Disney World Guest Communications account (wdw.guest.communications@disneyworld.com). An automated reply will be sent, and then sometimes an actual human will reply days or weeks later. This e-mail is used for all forms of communication and comments, including complaints or questions, so they have a lot to filter through. Although I have given thanks to a Cast Member this way, I feel like the odds of it reaching the Cast Member are much better directly through Guest Relations rather than an e-mail.

You can send thank you messages through Walt Disney World Resort’s Twitter account using #CastCompliment. They even Tweet back pictures of Cast Members holding the original Tweets. I love this idea because you get a glimpse into the magic that Cast Members create every day. Unfortunately, most of the Cast Members you’ll run into on vacation can’t accept tips or gifts, even small ones. However, some positions, like servers or Mousekeeping, depend heavily on tips to make a living. If you want to thank one of these Cast Members for going above and beyond their normal duties, an extra tip is a great way to show some appreciation for their hard work. Based on our Ask It survey from a couple weeks ago, it sounds like many of our readers do this already!

Give Thank You Notes

You can bring business card or post card sized thank you notes to hand out to Cast Members who are particularly helpful. A simple google search will bring up tons of options for cute Disney themed ones or some people create their own. If you leave a portion of blank space, you can even write a personalized thank you note to the Cast Member based on your specific experience. These are probably the least practical (who really wants to carry even more stuff with them around the parks all day), but it’s not too hard to leave these in the room with your tip for Mousekeeping, for example.

Talk to a Supervisor

I wouldn’t recommend this approach in every situation. However, I have given positive feedback directly to managers or supervisors when I saw them nearby. If they don’t look too busy with something else or you’re already talking to them about something unrelated, it doesn’t hurt to ask if they have a couple seconds to chat about the Cast Member. They’re usually pleased to hear the positive feedback and grateful that you let them know. Be on Your Best Behavior

Believe it or not, one of the easiest things you can do to thank a Cast Member for all that they do to make your trip wonderful won’t cost you any extra time or money. It just requires is a little bit of effort on your part to be kind to them and listen to their instructions. Their jobs aren’t easy, and it can make a world of difference to have guests who understand that the Cast Members are simply there to help.

Hopefully that gives you some ideas for your next trip! If you try any of them, be sure to let us know how it goes in the comments below. And to all those Cast Members who make our vacation dreams a reality, thank you for all your hard work!