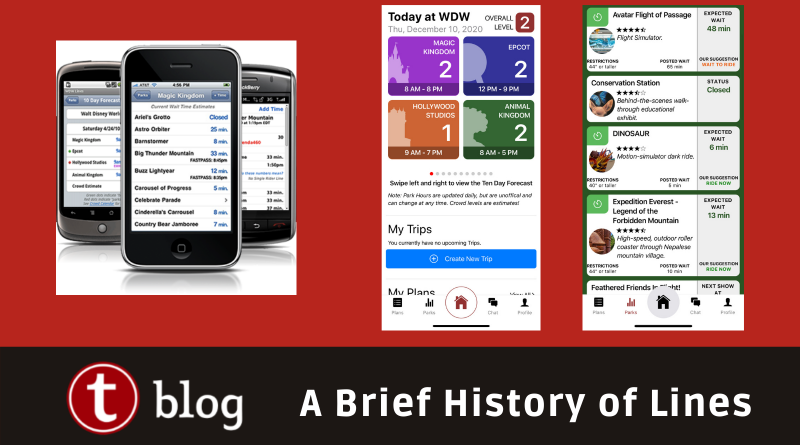 Lines 2.0 was a major leap forward for the TouringPlans site. Featuring a fully upgraded user interface, improved optimization, and new and exciting features now and coming in the future, there’s no surprise that Lines is the highest-rated Walt Disney World app in the iOS and Google Play stores. I recently sat down (virtually of course) with TouringPlans own Len Testa to talk about the creation of Lines and its new iteration.

The Lines app debuted in 2011. What challenges did you find in creating that first Lines app?

The original version of Lines – Lines 1, if you will – provided a basic web interface to our tools, most notably the computer-optimized touring plans and Lines Chat. When we wrote Lines 1, we wanted the same computer code to run on both Apple and Android devices.  And because there were not many ways to do that back in 2011, we settled on using a text-based web browser as the user interface.  It was simple, it ran on almost everything, and it got the job done.

The UI didn’t look great, especially as it became easier and more common for apps to have sophisticated, mobile-first interfaces.  But people were willing to accept the old-style UI because of the information and functionality it provided.  Throughout most of its life, including up to today, Lines 1 has been the highest-rated app for Walt Disney World in both the iOS and Google Play stores.  In fact, it’s rated higher than Disney’s own My Disney Experience app.  I need to give a shout out to Lines’ original developer, Henry Work, for writing an app that worked that well for that long.  That’s good programming.

What started you talking about an upgrade to the Lines app?

We realized that there were things we wanted to do with the app that couldn’t be done easily (or at all) through a web browser. The first of these was location-based services.  The HTML5 standard has GPS functionality, but not the same amount of functionality as native apps – apps purpose-built for a specific phone system.  In our case, we really wanted to provide in-park, real-time walking directions from one ride to another.  And we wanted to be able to optimize your touring plan based on exactly where you are in the park, so we know what’s convenient to where you’re at.

Another thing we wanted to do with the app was create experimental services today that people would expect to use 5, 10, or 20 years from now.  Way back in 1997, my first academic publication described a day where people would walk around with hand-held, GPS-enabled devices that would route you from ride to ride with minimal waits in line, using real-time data obtained in the parks.  And then we spent much of the last twenty years building it.  The question we face now is figuring out what that next big leap is – what’s the thing that guests in theme parks 10 or 20 years from now will take for granted, and how do we start building that now?  More on that later.

About how long did it take from saying “Hey, let’s do a Lines 2.0 app” to its iPhone launch?

Around 10 months, almost all of it the work of our developer Brad Huber.  When Brad and I were talking about goals for the app besides a modern interface, those goals were driven almost entirely by feedback our users were giving us: things like notifications, the ability to work in the presence of unreliable network connectivity, and fast response times.  So one of Brad’s first tasks was to design the back-end software elements to handle those things.  Brad also did almost all of the screen design, which I really like.  And, you know, he continues to patiently answer all of my questions about React Native, for the tiny bits of the app I work on.

What feature of Lines 2.0 are you personally most proud of?

Brad’s home screen design, which shows park information like hours and crowd levels, looks really good to me – I still get a “Wow, that’s really professional” feeling every time I see it.

Designing the screens for creating and updating touring plans were the most difficult user experience challenges we had.  For one thing, there’s no other analogous process that we could look at to see how other people solved it, so we had to do it ourselves.  We spent a good chunk of 2019 on that user experience, and I think David Davies, Brian McNichols, and Brad did a good job on making it easier to use.

Do you have any amazing statistics about the Lines app to blow us away?

Liners – the folks who use the Lines app – have the ability to tell us how long they’ve actually waited in line for a ride, through a stopwatch feature we built into the app.  We get anywhere from 100 to 200 actual wait times per day on an average day.  To date, Liners have sent in almost 400,000 actual wait times.  We use those to improve our wait-time model forecasts, so they’re really valuable to us.

We’ve also optimized more than 28 million touring plans, most of them through the app.

Aside from continuing to field test the Android version of Lines 2.0 for its upcoming launch, are there other projects that you are looking at for future releases?

Optimal turn-by-turn walking directions inside the parks using GPS is the next big thing we’re working on.  With that, we’ll be able to tell you step by step how to get from one place in the park to another, in the shortest amount of time.

Along with that, we had a fabulous intern over the summer, Yoel Hawa, who built a prototype for walking directions that uses augmented reality (AR) to guide you on your route.  Imagine giant Mickey Mouse gloves floating in space along the walkway in Tomorrowland, pointing out the path to follow to your destination.  Once we get the GPS and point-to-point walking directions done, this would be the next step.  And beyond that, we think there’s a lot of ways AR can help guests in the parks.

I’d like to thank all of the Liners who are providing valuable feedback on the app, and who continue to make the Lines community helpful, friendly, and welcoming to everyone. Also, Dustin Verdin is a graphic designer who did a great job with the UI elements we gave him.

Thanks, Len. And congrats to you and the whole team on the amazing success of Lines 2.0! Have an additional questions? Feel free to ask in the comments.

4 thoughts on “A Brief History of Lines: An Interview with Len Testa”