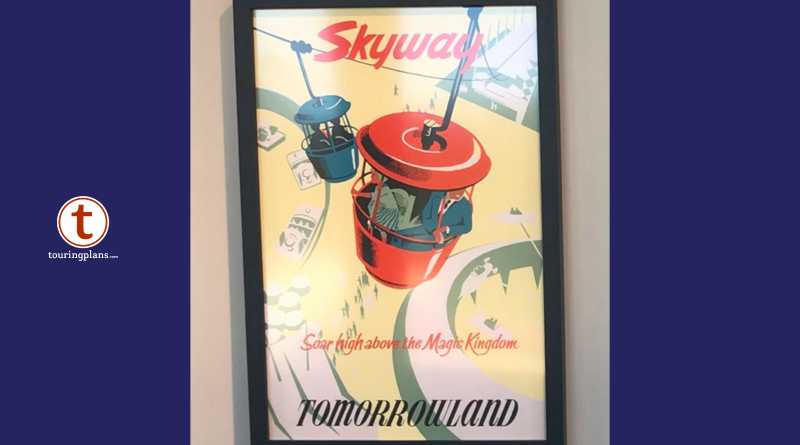 On September 29, Walt Disney World debuted a new form of transportation: the Disney Skyliner. These colorful gondolas transport guests to and from Disney’s Hollywood Studios, Epcot’s International Gateway, and several of the Disney World Resorts. Due to an incident on October 5, the Skyliner system was shut down temporarily, but you may be surprised to learn this is not the first gondola system at Walt Disney World.

What Was the Magic Kingdom Skyway?

The Magic Kingdom Skyway opened with the park in 1971. It was the only system of its kind in a Disney Park with a L-shaped turn near the Tomorrowland Speedway. Since only one-way trips were allowed, the Magic Kingdom billed the Skyway as two separate attractions: Skyway to Fantasyland and Skyway to Tomorrowland. Guests traveled the Skyway in colorful, open-air gondola buckets. Each bucket had a capacity of four adult guests with two facing forwards and two facing backwards.

Regardless of whether guests were traveling to or from Fantasyland or Tomorrowland, riding the Skyway guaranteed views over both lands. It also offered post-card perspectives of the back of Cinderella Castle, and even distant views of the Contemporary Resort, Splash Mountain, and even the Grand Floridian Resort and Spa!

The highlight of the trip was definitely the aerial view of the former 20,000 Leagues Under the Sea’s crystal-clear, aquamarine lagoon and its waterfalls. New Fantasyland is great and all, but I miss this lagoon!

The reasons for closing and replacing attractions are complex, and we may never know the full stories behind why they happen. What we do know is the Skyway was a low-capacity attraction and expensive to operate. Also, Disneyland had already removed their Skyway years prior in 1994. It’s true that a Cast Member died after being swept off the Fantasyland station by a gondola early in 1999. But the decision for closing the attraction down for good was most likely due to costs and logistics.

Where Can You Find Remains of the Skyway Today?

Oddly enough, the location of both Skyway stations today are now… bathrooms? Yes, both are now home to bathrooms at the Magic Kingdom. The Tomorrowland station known as the Skyway to Fantasyland was two stories with the first level operating as a bathroom and the second level as the station for the Skyway.

True to the original Tomorrowland aesthetic, the structure was a slightly stylized white rectangle with a waterfall feature. While the Skyway closed in 1999, Disney didn’t remove the empty second level until 2009 and kept the first floor bathrooms which can still be accessed next to Space Mountain today.

The Fantasyland station known as the Skyway to Tomorrowland was themed as an Bavarian, Alpine chalet. Compared to the Tomorrowland station, this departure point was much more scenic and charming with a winding queue over bridges and streams. When Disney closed the Skyway in 1999, the station remained. It was eventually used for stroller parking and as an occasional character meet-and-greet location. 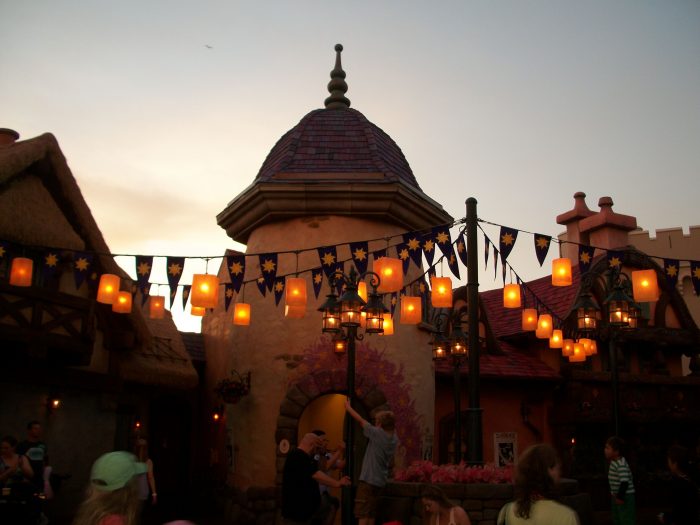 In 2011, the station was finally destroyed during the New Fantasyland overhaul. A Tangled-themed bathroom area was constructed in this space, as well as an additional path to Liberty Square to relieve crowd congestion.

Even though the original structures were destroyed, there are several things in the Tangled bathroom area reminiscent of the original Fantasyland Skyway station. For instance, the bathroom area still features bubbling streams and bridges, much like the Skyway’s queue. Also, The German influences in Tangled are present in some of the architecture and detailing of the bathrooms. Perhaps that’s a call back to the Bavarian, Alpine theme of the old station?

For an actual remnant of the Skyway, look down at the pavement near the FastPass+ entrance for “it’s a small world.” Surrounded by the land’s red pavement are a collection of cobblestones and small circular drain. One of the pylons for the Skyway once stood in this space as seen in the picture above.

Now Disney has been paying tribute to the Skyway in recent years, most notably through the Disney Skyliner. Even though the Skyliner is much more expansive, modern, and purposed to be a transportation system instead of an attraction, it’s still reminiscent of Walt Disney World’s original gondola system. Disney also added a nod to the Skyway at Disney Springs of all places. 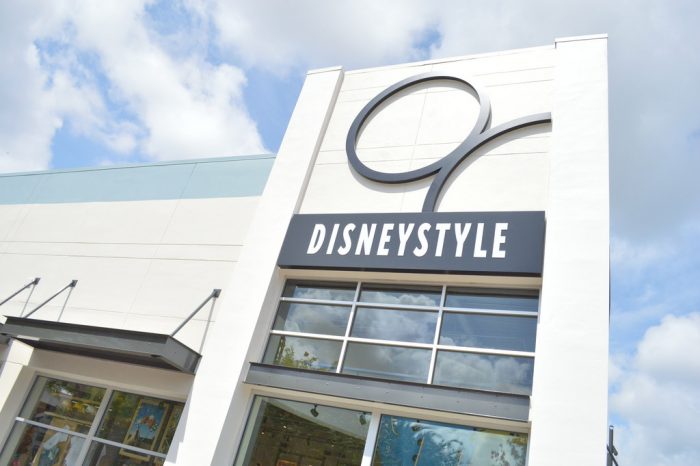 When shopping at the DisneyStyle store at Disney Springs, be sure to look up. A blue Skyway bucket hangs from the ceiling just above the Mad Tea Party teacup photo-op! It’s a fun addition for those who remember riding the Skyway or who had only seen this old-school attraction in photos.

While I enjoy what the Disney Parks offer now, I also enjoy discovering relics and tributes to the magic and memories that came before and their presence in the parks today. Did you ever experience the Magic Kingdom Skyway? If so, please share your experiences!