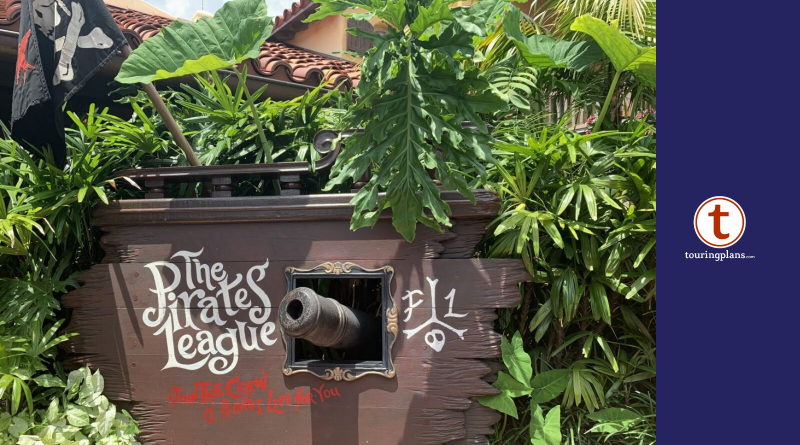 I’ve spent a good amount of time and a decent chunk of money at the Bibbibi Bobbidi Boutique so I am not unfamiliar with the Disney makeover process. My 6 year-old, like most children her age, loves mermaids and was very excited about the idea of looking like one when I proposed the mermaid makeover at the Pirates League in the Magic Kingdom.

The Pirates League is located next to the entrance of the Pirates of the Caribbean in Adventureland. The exit of the League opens into the merchandise shop for the attraction. 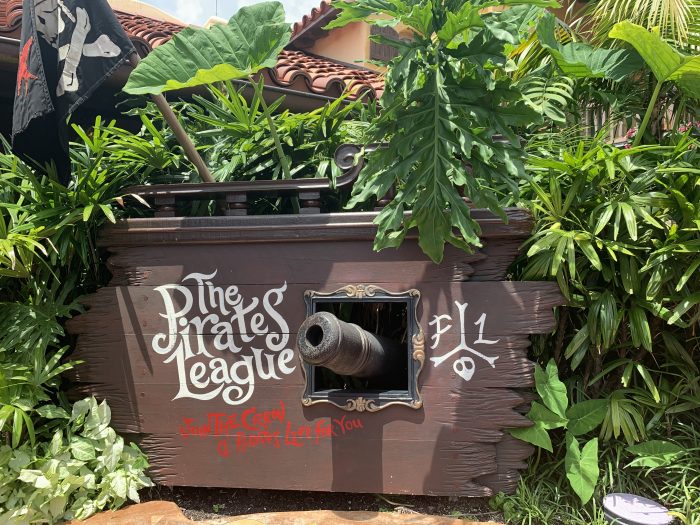 Any guest 3 years old or older may participate in the mermaid or pirate transformation process at the Pirates League. This differs from the Bibbidi Bobbidi Boutique in that only children 3 – 12 years old are permitted to receive princess or knight makeovers. The cast member I spoke with during our visit said many families take advantage of this expanded age rule and book visits prior to Mickey’s Not So Scary Halloween Parties in the fall. The same cast member told me that the Pirates League would have expanded hours on the dates of the MNSSHP but as of the date of this article, the calendar on the Disney website still only reflects the usual 9:00 a.m. – 2:00 p.m. hours on those days.

Reservations or same-day appointments are far easier to secure at the Pirates League than at the Bibbidi Bobbidi Boutique. During our visit, there were a few Pirate Masters (their answer to the Fairy Godmothers-In-Training at the BBB) with empty chairs. You can make reservations online on the Disney website under the Enchanting Extras section of the Things to Do tab. You can also make reservations in person or try for a same-day appointment.

Benefits of the Pirate League over the Bibbidi Bobbidi Boutique

You will check in at the exterior desk just behind the cannon / sign for the Pirates League. The costume samples are displayed on a rack to the left of the desk. You will select your package and the price, but you will not be escorted to the check-out desk for payment until the very end of the makeover. This is different from the Bibbidi Bobbidi Boutique where you pay immediately after a costume is fitted and before any of the hair / makeup / nails magic happens. 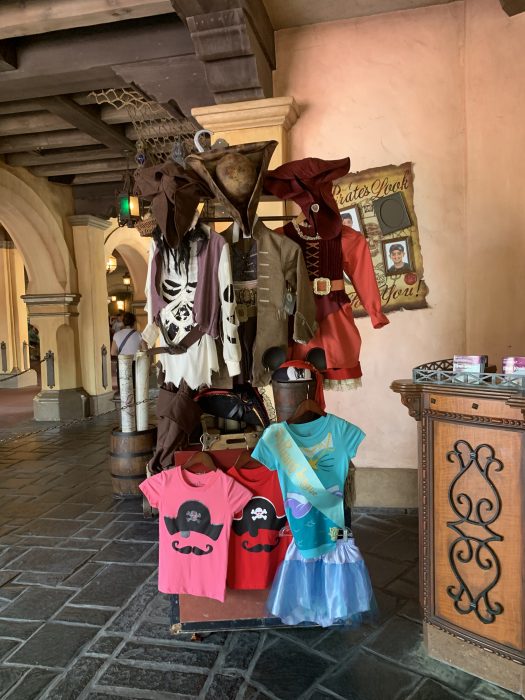 After you check in, your Pirate Master will escort you to a laminated book of maps where you will sign your name after taking an oath promising not to bite anyone. The oath may differ depending on the Pirate Master, but this was the oath Gigi was asked to sign. (It may have had something to do with Gigi’s lack of two top teeth!)

After signing the pirate / mermaid oath book, you will be escorted to a dressing room that is dark wood and a pretty great replica of an interior pirate ships cabin. (This opinion, of course, is based on my extensive pirate ship education at the Jack Sparrow School of Pillage and Plunder.) After you’re all decked out in your pirate or mermaid finery, you’ll be escorted to your chair.

Since I only have experience with the mermaid makeover, that’s what I’ll detail here.

Hair – Just like the BBB, the Pirates League asks that hair be brushed through or combed out. Gigi’s Pirate Master did a little twist on either side of her head and secured it with a flower clip that appeared white inside and turned sea blue in the sun. It was lovely and far less fussy and fancy than anything she’s ever had done at the Boutique. 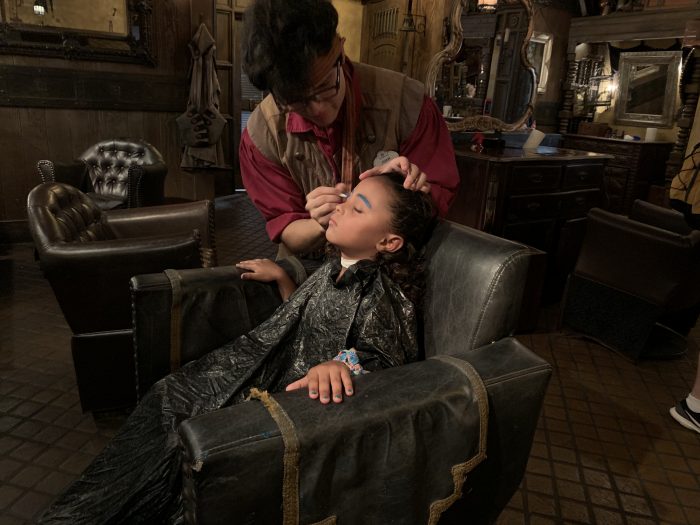 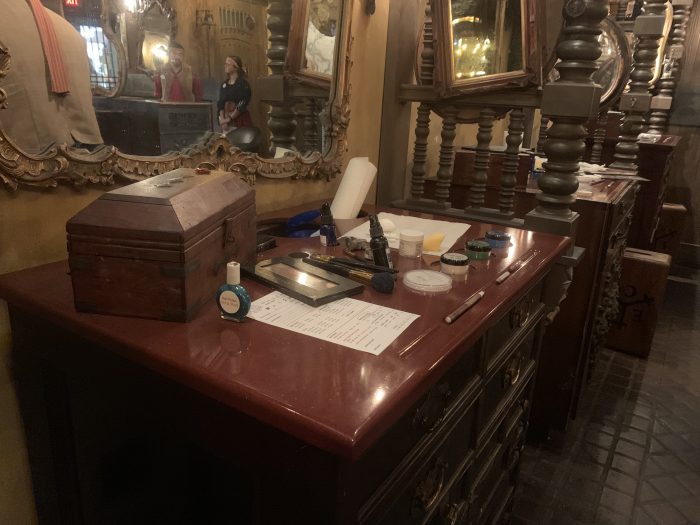 Nails – Blue sparkle mermaid nail polish was next. The little bottle of 0.5 fl.oz. polish was one of the items that Gigi got to take home – just like at the BBB. The color matched the outfit and Gigi likes having her nails done. We made sure her nails were clean and free from polish when we came in – something  both the Pirates League and the Bibbidi Bobbidi recommend.

Makeup – The mermaid makeup was a real stand out to me and part of what made this such a good value. Gigi’s Pirate Master used a fish scale stencil and some pretty eye shadow to do her gorgeous eye makeup. I was pretty geeked out by this step and it was the only thing that made me start considering family fish themed Halloween costumes so I could get it done too. The makeup pallet is the same one used at the BBB but the effect here was much more dramatic. The use of a black eyeliner pencil was also new to Gigi, but she seemed very comfortable and her Pirate Master didn’t do anything without discussing it with her first. 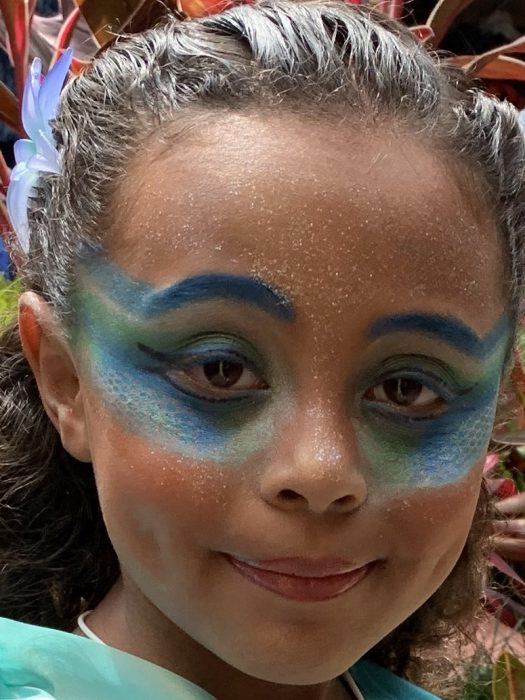 Total Package – The total for Gigi’s Mermaid Deluxe Package was $97.72 before taxes and my annual pass discount. This included: 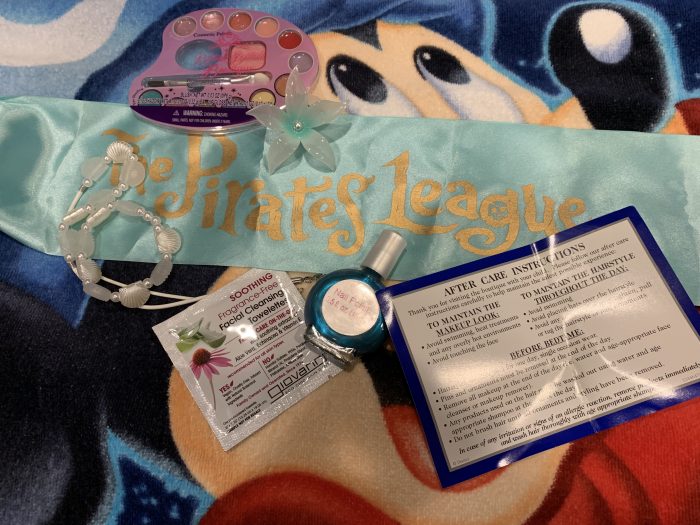 The goodies your mermaid will get at the Pirates League with the Mermaid Deluxe Package. 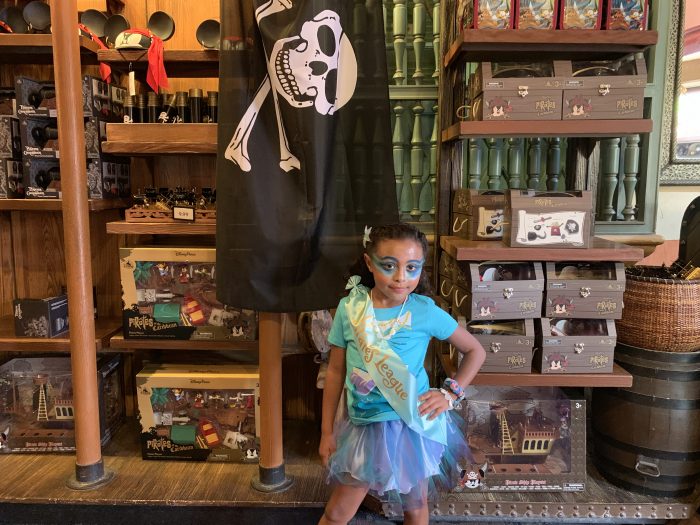 Five out of five unicorns! “I liked my mermaid makeup and hair and my tutu wasn’t itchy at all.”

Mom’s Rating: A great value! Lots of Disney magic, tons of personal attention for your mermaid, and a huge amount of glitter for a fraction of the price you’ll pay at the Bibbidi Bobbidi Boutique. Gigi wore her mermaid makeup for 6 hours after we left the Pirates League and it was full-blown summer. 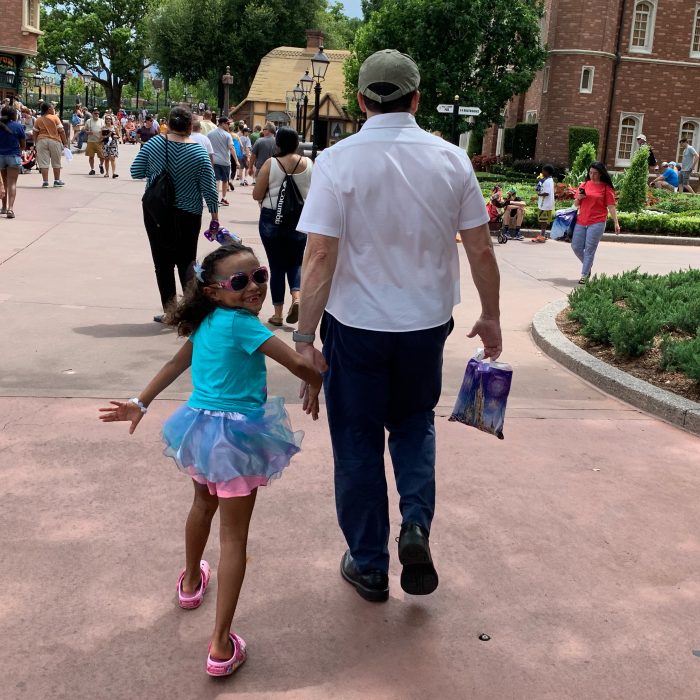 Gigi with her pal Len, six hours in her mermaid gear and still rocking the look around Epcot.

Have you or your kiddo had any of the other makeovers at the Pirates League? What did you think? Would you recommend the experience for adults? Please share your comments and suggestions!

One thought on “Become a Mermaid with the Pirates League”