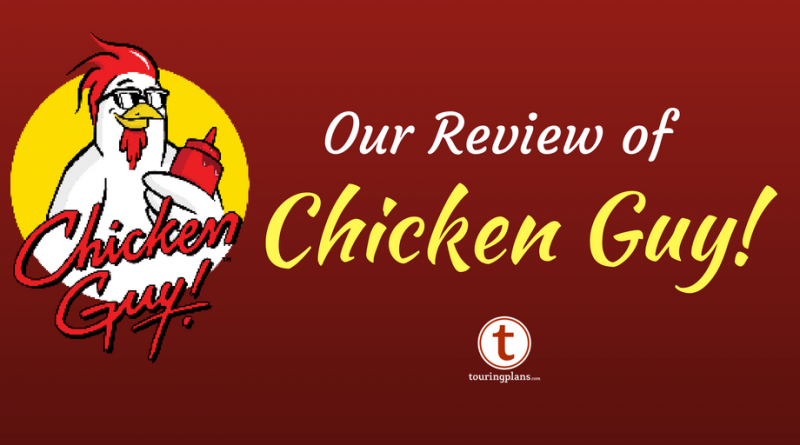 Just announced only a few weeks ago (with expert sleuthing from TouringPlans confirming suspicions of this location a few months ago), Chicken Guy, celebrity chef Guy Fieri’s newest fast food concept, opened at its Planet Hollywood-adjacent location in Disney Springs last week. Touted as the place to get your chicken on (a strange claim with Art Smith’s famous fried chicken at Homecomin’ just down the way), and “the cheapest meal at Disney Springs” (Earl of Sandwich, Pizza Ponte, and Blaze beg to differ), Chicken Guy features chicken sandwiches, chicken salads, and plain ol’ chicken tenders alongside dipping sauces. I stopped in a few days after opening to sample a selection of menu items and see if this location is worth adding to your future Disney TouringPlan.

A quick glance of the menu shows a pretty simple selection of items. Plain tenders, fries, and a few snacky items are the base of the menu, and then several other items (like tender sandwiches, salads topped with tenders, and loaded fries) are built around these basics. On the back of the menu (and plastered on the wall inside the restaurant for good measure) is the dizzying array of dipping sauces, counting 22 in total, ranging from sweet, standard, spicy, and everything in between. I tried to sample one item from each category of the menu to get a feel for portion sizes and food quality, though, as you’ll see below, I recommend on your visit you stick to the tenders themselves. First, my dining party tried the Southwestern sandwich ($6.99) with pepper jack cheese, donkey sauce, avocado crema, cumin lime mojo sauce, charred corn, roasted peppers, black beans, lettuce, tomatoes, and crispy tortilla strips. Yes, that’s right – a whopping ten toppings come on this sandwich atop two chicken tenders, which sadly lose all crispness under the weight of these additions. Furthermore, Chicken Guy has managed to turn the kitchen sink into nothing in a flavorless feat of alchemy; for all it has going for it, this sandwich doesn’t taste like anything. I’d steer clear from these heavily topping-ed sandwiches and stick to the basic CG Classic or Sauce Boss options.

Next up, we sampled the chopped chicken Caesar salad bowl topped with our choice of grilled tenders (vs fried tenders) ($8.49). This is a pretty standard salad option, served with crisp and fresh romaine lettuce, a bit of Parmesan cheese, a few croutons, and grilled chicken with dressing on the side. A fairly large portion, this is a reasonable light option for those not looking for the heaviness of fried tenders and fries, though I wouldn’t run here just for this dish compared to other salad options across Disney Springs. I’d also say this is probably the best way to eat the grilled tenders, as alone, they didn’t have a ton of flavor, especially compared to their fried chicken tender cousins.

For a quick snack or appetizer to share, we split an order of fried pickles ($2.99). Cornmeal battered, these pickles were unremarkable. Mostly, I just tasted breading, with little pickle flavor, and they were a tad dry compared to what I’d expect fried pickles to be. I’d skip these in favor of an order of fries or an extra tender or two.

Where Chicken Guy actually shines is with the basics – fried chicken tenders and fries are the name of the game here, and they are worth the visit. The fried chicken tenders were reasonably sized, about the same size as your average fast food tender, with salt and pepper seasoned breading and perfectly crisp. The serving boxes come lined, which helps ensure the tenders arrive to you in a not-too-greasy state. The standard three tender combo with fries and a soda is $11.49, which I find a dollar or two too expensive for what you get, but is enough food for an average adult looking for a decent fast food meal; five tenders would work for a hungry patron or to split between a few folks.

The seasoned fries were crisp and not too greasy, covered unevenly in a seasoned salt-style powder. The side of fries was decent in size – probably about the size of a small fry at your average fast food location. If you’re craving more fries, splurge on the loaded fries ($7.99) to split for the table – topped with super melty cheese (which I became well-acquainted with when Planet Hollywood reopened), green onions, grilled chicken tenders, and bacon, these fries were the first thing to disappear off our table. The bowl contained easily two to three servings of fries with toppings, for size reference, but we had no issue devouring them. They’re simple, to be sure, but tasty nonetheless.

For dipping sauces, I sampled six – the curry mayo, wasabi honey, bourbon brown sugar BBQ, buttermilk ranch, teriyaki, and peri peri. Overall, I’d order any of these again – surprisingly packed with flavor, each offered a new taste contrasting with the savory, crisp chicken. The sweet and only slightly spicy wasabi honey was a hit with my table, and one I’ll definitely order again on a future visit. You’re able to sample two sauces per order of chicken tenders (and alongside the Sauce Boss sandwich), so take advantage and try to sample one of the outside-the-box flavors; you might be as surprised as we were by how good it turns out to be. And, if you need refills, be sure to hit up the Sauce Slinger, a Cast Member walking around in a questionably-haute couture fashion/performance art costume vest with slots for many bottles of sauce.

For dessert, we tried the triple double mint shake ($4.99), a mint soft serve shake with a ton of chocolate chips, topped with one or two crushed oreos and a thin mint cookie. As a milkshake, it’s not terrible, but it was definitely artificial tasting and sickly sweet (and I happen to like neon green mint chocolate chip flavored things most of the time!). Instead of ordering this shake (or the apple jacks shake), I’d stick to other options around Disney Springs for dessert like Amorette’s, Vivoli Gelato, Babycakes, or Aristocrepes.

Aside from the food, we had a few bobbles in service, which, if I’m honest, was a little irksome. We had multiple orders at one table (not uncommon, and allowable by their system), which caused some issues when a Cast Member picked up both of our buzzers when delivering one order, ensuring the other order would never arrive to our table. Additionally, more than one part of our orders arrived incomplete; we had the wrong sauce selections, and we were missing the shake we ordered as well. While not life-ruining, to be sure, it is a little annoying that we had to hunt someone down to fix the issues.

These service issues were in addition to the long (too long) wait to order – with about 15 parties in front of us, we waited 38 minutes to order, and another 10 minutes for food to arrive. This is not terribly efficient considering the restaurant has a fairly limited menu and multiple Cast Members taking orders; neighboring quick service options at Disney Springs are certainly faster in a rush. Considering I dined several days after official opening day, on a slower weekday evening before dinner rush arrived, I expected a bit faster turnover. Our overall meal time was just about an hour, eating quickly; keep this in mind if you are dining here soon and have a FastPass+, Magical Express, or movie to catch.

Overall, Chicken Guy delivers on a few fronts (most notably, with their chicken), but could use some improvement with regards to speed and quality of a few items on their menu. If you are a chicken tender fan and don’t want to sit down for a meal, this is probably the stop for you (pro-tip: Splitsville is your best option for tenders at a table service). I wouldn’t necessarily stay away from Chicken Guy otherwise, but they do one thing very well and the rest only moderately well, which makes for a tough recommendation overall.