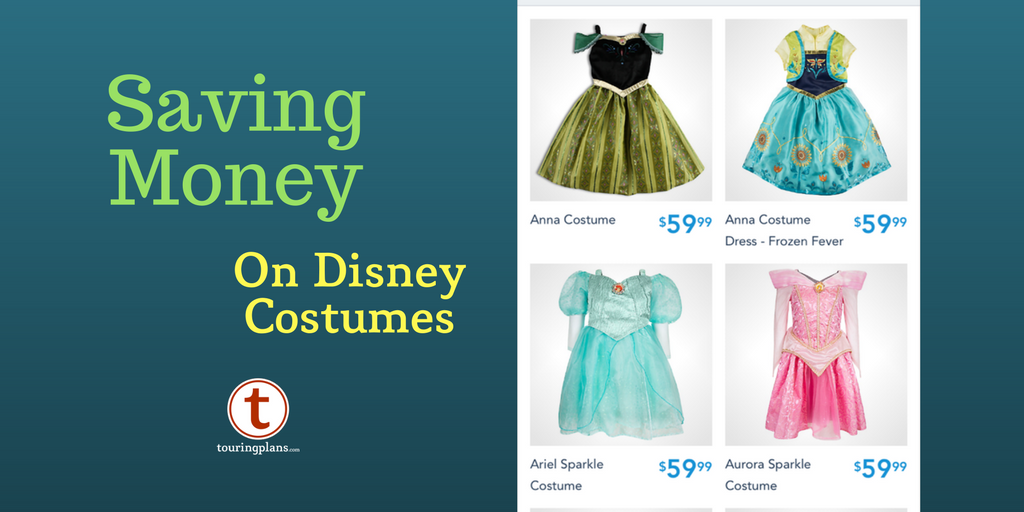 Kids are only young once, and every parent wants to have amazing memories (assisted by plenty of photographs) of those precious childhood years. It seems that you can’t poke around the internet without seeing videos of parents doing transforming princess dresses or multiple costume changes over the course of the day. For most parents, those kind of photo shoot forays don’t couple with limited packing space or a limited budget. And although you can get the royal treatment from Disney itself through the Bibbidi Bobbidi Boutique and Pirate’s League, the full experience including costumes, makeup, and hair styling can add up quickly, especially if you have multiple kids in that age range.

There are other options if you want to have your child experience the fun of dress up for a day in the park, however. Here’s some options for your Pirate or Princess that won’t have you emptying the royal treasury. One challenge with the fancy dresses sold by Disney at their stores or in the BBB is that they are hideously, horribly uncomfortable for many kids and certain times of year. I advise any parents who are going to have their child wear one of those during a typical Florida summer day to bring a change of clothes–within a matter of hours, many children will be begging to get out of the hot and itchy taffeta of terror. What is comfortable, though? Nightgowns and PJs. At many clothing retailers, you can often find officially licensed Disney nightgowns for girls or PJs for boys or girls to help them dress like a favorite character. Even better, because they are sleepwear, you can use them after you get home for more than lining the bottom of a dress-up box. For my daughter (pictured here), we added to the nightgown with a tiara and a plush Pascal for less than half the price of full-on Rapunzel costume. And for the Star Wars fans out there, how many kids grew up wearing bathrobes around the house just to pretend to be a Jedi? (Just me? I don’t think so!)

One down side to the costumes that parents can spend a lot of money on for their kids is that kids grow very quickly at the ages where they’d be likely to want those costumes. In many cases, costumes may only be worn a couple times before they are outgrown, and that means they are in great shape but utterly worthless to parents trying to clean out their kids’ closets. Check local message boards for your community, thrift stores, and secondhand kids’ clothing stores or consignment shops, especially in the fall, for these practically new costumes at deep discounts. Don’t forget about sites like eBay, too! You can often score that $60 princess dress for $10-15 in almost-new condition.

Disneybounding  and Homemade Costumes for Kids

Disneybounding, the art of using “normal” clothing and accessories in certain key color schemes or patterns to evoke recognition of a character isn’t just for adults. A quick glance at Pinterest or similar sites can bring a wide variety of ideas. Even better, Disneybounding can be done to adjust to different weather and levels of comfort. If your family was anything like mine, Halloween meant homemade costumes. Get creative — I have far more fond memories of homemade costumes than anything bought off the rack. (As an adult, I dressed up as the feather duster from Beauty and the Beast by tying a bunch of feather boas on a belt and my husband dressed as Lumiere by wearing yellow pants and a shirt and carrying around battery-operated candles. We got many compliments on those costumes at our first Not So Scary Halloween Party!) This is a case of you have to be in the right place at the right time. On November 1, Halloween merchandise and most retailers goes on clearance–anywhere from 30-50% off in the initial wave. Licensed character costumes go quick, so scout out stores the night before to see what the selection looks like, and be at the store when it opens if you want to snag these bargains. Not a fan of a Black Friday-like rush at the brick and mortar stores? Try online for similar discounts with most retailers. Also keep an eye on “normal” clearance racks, too. Remember those nightgowns I mentioned earlier? They can end up on the clearance racks at steep discounts throughout the year. See what stores have tie-ins with the latest Disney/Marvel/Pixar/Star Wars movies, and keep an eye on the clearance rack. For blockbuster movies (or movies that are predicted to be blockbusters), stores will often load the shelves full of merchandise–and not all of it will sell at full price.

Sometimes Just a T-Shirt Will Do

My all-time favorite Halloween costume was a plain t-shirt that had the word COSTUME stenciled on the front in very generic letters. There are so may different t-shirts out there for every character imaginable, and some of them are very cute or downright funny. I can personally attest that Minnie Mouse is just as happy to see a kid wearing a Minnie or Mickey t-shirt as they are when a kid comes in a full costume, and will give your kid just as much attention. (A shirt with Donald Duck #1 on it will make a certain feathered friend’s day!) On Disney Cruise Line, our family skips the full-blown Pirate Night costumes and go with t-shirts that look like an actual pirate costume.

So there you have some ideas for how to enjoy the dress-up experience without breaking the bank. Do you have additional ideas? What’s the most creative DIY costume you’ve ever seen? Do you think it is worth it to spend the money for the official BBB or Pirate’s League experience with the full-on costume? Let us know in the comments.