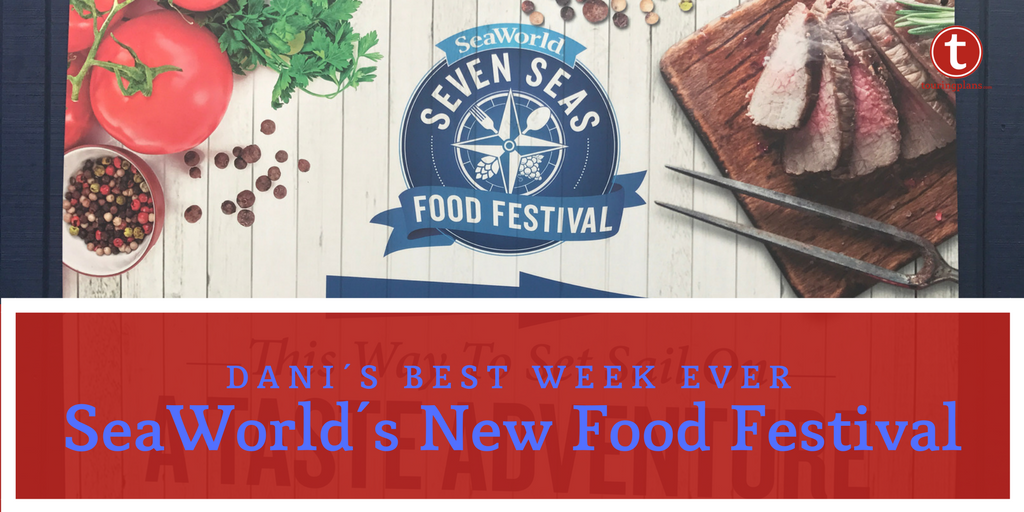 SeaWorld is entering its rebirth and it is gratifying to see them try new things. One highly anticipated enhancement is the creation of the brand new Seven Seas Food Festival. I’ve been curious about this new food festival ever since it was announced, nearly a year ago.

On much shorter notice, SeaWorld announced a new Dolphin show. At such an announcement a wave of sadness crashed over me due to the loss of the creative and theatrical show “Blue Horizons.” I tried to remain optimistic about its replacement. Opening weekend of the new show “Dolphin Days” commenced, so I journeyed to SeaWorld to experience their newest creations. After completing my weekend chores (ok, most of them) I ventured to SeaWorld Orlando. As a result of my late arrival, around 2:00 PM, I was directed to the furthest parking section. No matter, I knew I’d be consuming a large amount of decadent food; the extra steps would do me good. As I approached the park entrance I saw the Festival Pathway through the fencing and noticed that all the booths were shuttered. Clearly I misunderstood what SeaWorld meant when they announced that the Seven Seas Food Festival would begin to take place daily through April 16, as opposed to just Saturdays. Once inside I headed to Guest Services to gain clarity of what is offered on days other than Saturdays for the Seven Seas Food Festival. SeaWorld’s Guest Services is different than Disney or Universal in a few ways. It is entirely outside, resulting in a hot and sticky wait, and not much relief when you reach the representative. The staff member kindly answered my questions about the festival. I decided to purchase the 10 item festival badge since nine booths were open during this abbreviated version of the Seven Seas Food Festival. The scoop is the full festival is offered every Saturday though May 13, 2017 while nine of the booths are open every day through April 16, 2017.

The best of the booths

I decided to use the 10 item Sampler badge at each of the nine booths, ordering one item as each booth, plus a second item at one of the booths. Naturally, I ordered the second item at the Florida Market booth (which turns out is not home to my favorite item of what I sampled, but came close). By the end of the day I enjoyed $52.75 worth of items (had I ordered them a la carte without the badge), but only paid $35. The items range in cost from $3.50-$7. The Sampler badge is definitely the way to go. Overall I was pleased with everything I ordered.

Here’s some of my favorites: I’d make a special trip back to SeaWorld just to get another plate of this stuff. The chicken is so tender and braised in a mole sauce, with rich flavors of chocolate and warm spices. The rice had a great texture and flavor, which is often not the case in theme parks when rice is cooked well in advance and then sits. This Mexican mound is finished off with shredded cheese and cilantro. It was the first dish I tried and set the bar pretty high for the rest of the Festival. It is as indulgent as it sounds. Two thick slices of pound cake are lightly buttered then grilled with a thin slice of tangy white cheese. A delicious raspberry sauce is layered on top. I’d love this dessert even more if there had been more cheese and more sauce. Still, it was definitely a highlight. Choosing what to order at this booth proved incredibly difficult. I’m tempted to go back so I can sample the rest of this booth’s menu. I decided on the Hawaiian Pork Slider mainly because it is often a big hit when presented at Epcot’s food festivals. Naturally I wanted to compare. I have to give SeaWorld’s Slider a slight edge over Epcot’s. The pork is closer to traditional kalua style than Epcot’s, there’s a drizzle of sweet sauce, and topped with sauteed peppers. And you can enjoy it right next to a shark touch pool! Without purposefully intending to, I somehow saved one of the best dishes for last during my visit. The Braised Short Ribs were tender and succulent. Beneath them, a blanket of grits – and a touch of jalapeno, perfect for sopping up the aged-balsamic glace. Crispy onion strips and green onions top this deliciousness. I wish I hadn’t been so full from the day’s exploration of the festival so that I could have really savored this plate.

Honorable mentions – still worth a taste Anything Florida is sure to put a smile on my face. Just approaching the Florida Market booth was enough to put a pep in my step. Each booth at the Seven Seas Food Festival has a decorated point of sale kiosk that is connected by a themed banner or garland of some kind that connect to the food preparation and pick-up booth. The shrimp in the Coconut Shrimp were freshly fried, tender, and large. The Mango Horseradish Sauce is the perfect accompaniment, and helped the very bland slaw that was nestled between the two shrimp.

The Key Lime Martini is not alcoholic, despite the name. It is a delicious dessert, essentially key lime pie in a cup. Graham cracker crumbs fill the bottom of the martini cup, sweet and tangy key lime pie filling makes up the majority of this dessert, and it’s topped off with a little whipped cream. I really enjoyed this dessert, but you’d definitely have to be a key lime pie fan to like it. Oh pork belly… how you’ve grown up these recent years. Seems every gastropub (are those still a thing?) and food festival puts their spin on this protein. This plate is a good blend of savory and sweet. The pork belly is hearty, fatty, and salty. Underneath it, a layer of smashed sweet plantains add a velvety sweet touch. It’s finished with a red wine reduction that I could not get enough of. Now that I think of it, everything I tried during the festival could have used a little more sauce. This red reduction was divine!

The Seven Seas Food Festival takes place in three sections of the park. The nine featured booths are in the Waterfront Area, Shamu’s Happy Harbor, and Wild Artic area. The additional festival booths and concert stadium that are in use on Saturdays are in the Festival Pathway area which is immediately to the right when you enter the park.

The nine featured booths are numbered 1-9, starting with Mexican Market and ending with Gulf Coast market. After obtaining my badge and festival guide from Guest Services I headed for the Waterfront area. This is my second favorite part of the park (my first favorite being the Key West area – duh!). SeaWorld is a very relaxing park overall. Beautiful landscape, waterfalls, and a lush tropical feel throughout. The Waterfront area is home to some of my favorite shops in SeaWorld, some good quick service dining, the Sky Tower ride, and lovely waterfront seating. Throughout @SeaWorld there are scenic waterfalls, lots of places to stop and rest pic.twitter.com/0KuV5CrRp8

I started at booth number one, Mexican Market, and continued my way in chronological order, with a diversion halfway through to water Dolphin Days, more on that momentarily. The first think I  noticed about the Seven Seas Food Festival is how relaxed it is. Epcot’s festivals have become massively busy, often overwhelming. The second thing I noticed is the amount of seating with tables and chairs as well as high top tables, at every single booth, and there’s plenty of shade. No need to put your food and drink on a trashcan here, you can actually eat of a table like a civilized human being!

I made my way through booths 1-5 in about a two hour time span, including stopping at the underutilized Sand Bar for happy hour (offered 3:00 PM – 5:00 PM $2 off beer and wine – very small selection). I back tracked a little and headed to the Key West area of the park, my happy place, and home to Dolphin Theater to view “Dolphin Days”. It was the perfect way to rest and relaxing after trekking through the park and devouring some delicious food.

After digesting and enjoying “Dolphin Days” it was time to finish my exploration of the festival. Booths 6-9 are spread out from just before Shamu’s Happy Harbor, throughout Shamu’s Happy Harbor, and right next to the Wild Artic attraction. Booths 8 & 9 are next to Wild Artic in a covered area that has a shark touch pool in the back. It was great to finish here as there was so much shade and space; a great place to relax. I’ve lived in Orlando my entire life. As a child I visited SeaWorld countless times and above all else, the ability to interact with dolphins has always been my favorite part. These childhood visits gave me a love for the natural world around me, especially the ocean’s ecosystem. I’ve seen three incarnations of the dolphin show at SeaWorld in a 30 year timespan. This latest one is a perfect blend of the emotional connections I expect in a SeaWorld show and a new modern take on educational components.

There is pre-show entertainment, a comedy trio I’ve seen during SeaWorld’s Halloween Spectacular and Christmas Celebration. Prior to their arrival tropical, steel drum music played in the theater and I swooned when instrumental versions of Jimmy Buffett’s “Margaritaville” and  “Last Mango in Paris” came on.

The show follows a similar format of “One Ocean” which is the current Shamu show. It exceeded my expectations and had far more exciting moments and impressive dolphin behaviors than I expected. As someone who loves these creatures, I felt gratified and happy throughout the show. Guests of all ages are sure to enjoy it.

Despite my weekend being full of chores and responsibilities, I still managed to have one of my best weekends ever thanks to the fantastic time I had at Seven Seas Food Festival. This festival and the new dolphin show are two big steps in the right direction for SeaWorld Orlando. This park, Orlando’s second longest operating theme park, has seen some tough times, but these new offerings give me hope that better days have started to arrive.

One thought on “Dani’s Best Week Ever April 6, 2017: SeaWorld makes a splash with a new food festival (and show)”