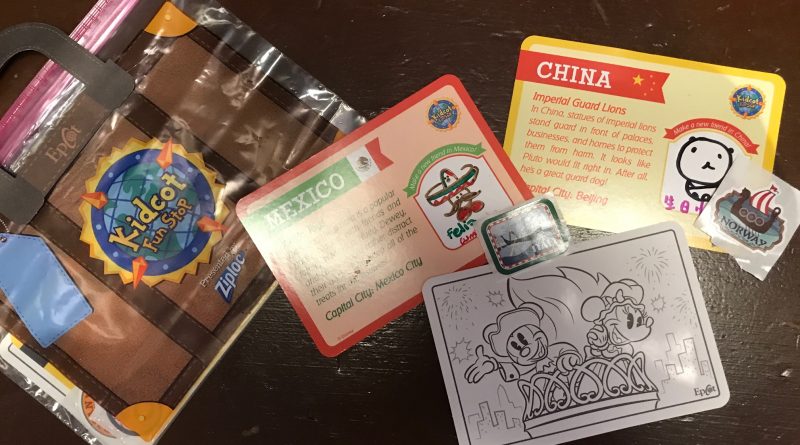 One of the most fun things for the kiddos (and who am I kidding, adults frequently get in on the action too!) to do while touring around Epcot is to take part in the Kidcot Fun Stops. These educational craft stations found in each of the 11 countries around World Showcase allow Guests to drop by any Kidcot Fun Stop for a fun activity. Here you will find art supplies which are provided at each station where your child can decorate a keepsake. Recently though, a change has occurred with the Kidcot Fun Stops, courtesy of the new sponsor, Ziploc!

Guests will be given a Ziploc bag which looks like a suitcase from any Kidcot station. At each of the 11 countries, you’ll be able to collect a special traveler’s card which includes facts about that country. Don’t worry! The Cast Member will still be able to personalize each card with a drawing or text.

On the back of each card is a picture which little ones can color. The design fits the motif of each country, so for example, when you stop at the American Adventure Pavilion, you’ll be able to color an image of Mickey and Minnie on top of the Statue of Liberty’s torch.

Once a Guest has collected all eleven cards, they can visit any Kidcot Fun Stop for a special World Showcase postcard from Mickey Mouse!

I thoroughly enjoyed running around each country picking up my cards and very much liked that I didn’t have to contend with a giant Duffy on a stick that never really fit in my park bag. It was fun because it was my birthday, so most Cast Members drew on my card in celebration of that occasion. (Make sure you wear that birthday button!) Also, I found out during a monsoon that because I stored all my cards in my Ziploc bag, they stayed dry and didn’t end up as paper mush in the bottom of my bag!

Now, while many enjoy the thrill of finding the Kidcot Fun Stops on their own, if you do want to know exactly where they are, you can find them at the following locations:

Personally, I think this is a big enhancement for the activity. I liked the cards much better than the Duffy and still enjoyed interacting with the Cast Members, which to me, is the best part about the Kidcot Fun Stops to begin with. Oh and best of all, the Kidcot Fun Stops are free!