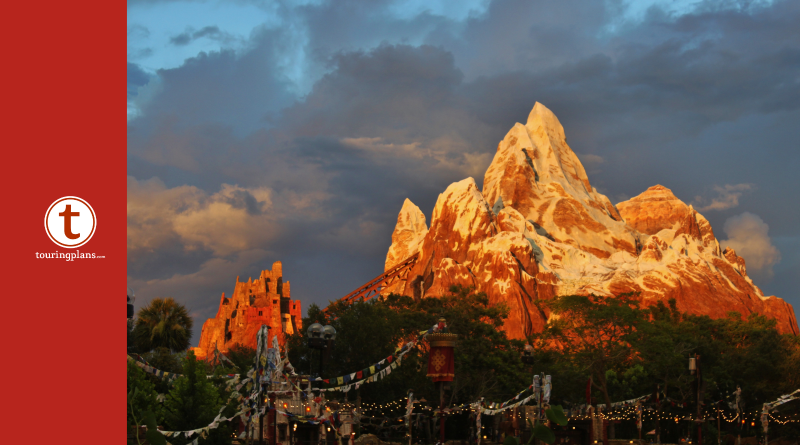 You’re going on vacation to Walt Disney World! The only problem? You’re not sure which attractions are right for you and your kiddos and you have questions. Which attractions are too intense for little ones? What rides do I really need a FastPass+ reservation for? What’s the disability access like for certain attractions? We’re answering all those questions and more in our Everything You Need to Know attraction series with today’s focus on Expedition Everest at Disney’s Animal Kingdom.

What Is Expedition Everest?

Expedition Everest – Legend of the Forbidden Mountain is Animal Kingdom’s take of a runaway train coaster in a mountain. Think of it as a combo of Disneyland’s Matterhorn and the Magic Kingdom’s Big Thunder Mountain. This highly detailed coaster takes guests in and out of the snowy Forbidden Mountain to escape the legendary Yeti!

Where Is Expedition Everest?

Expedition Everest is located in the Asia section of Disney’s Animal Kingdom park.

What Is the History of Expedition Everest? 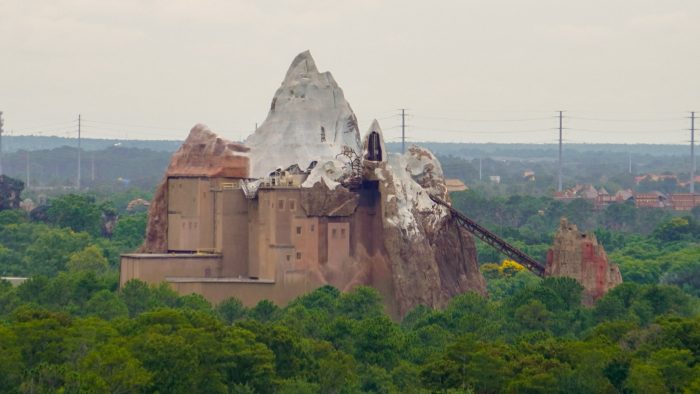 Expedition Everest was announced April 22, 2003 for Animal Kingdom’s fifth anniversary. Imagineers, including the legendary Joe Rohde, spent six years creating the attraction and taking research trips to the Himalayas. Expedition Everest’s grand opening was held on April 7, 2006, and it became an instant classic and a much-needed thrill ride for Animal Kingdom. The mountain is also the tallest of all the Walt Disney World Resort mountains peaking at 199.5 feet!

What Do You Need to Know About the Queue for Expedition Everest?

The queue for Expedition Everest is one of the best at Walt Disney World! Guests wind through the tour company office, outdoor shrines to the Yeti, a museum documenting Yeti sightings and evidence, and more before reaching the train platform to board the attraction. Both the indoor and outdoor portions of this richly layered queue immerse guests in both the story and the culture of the region being represented.

What Are the Ride Vehicles Like for Expedition Everest? 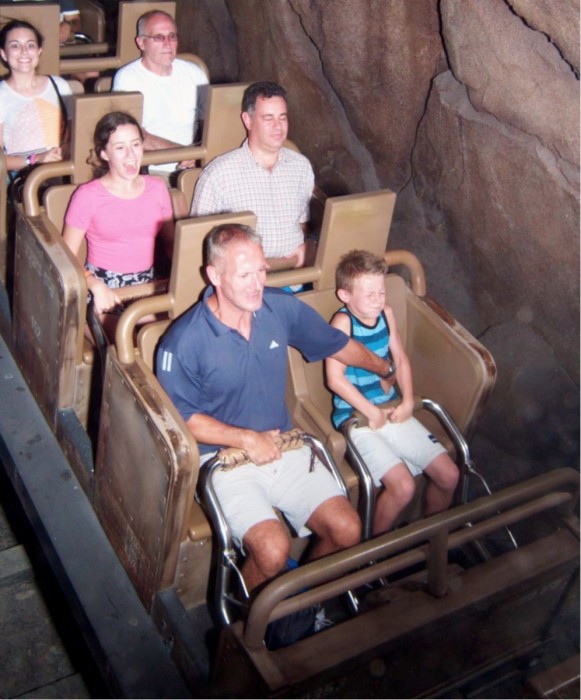 An Expedition Everest train can carry 34 passengers with 2 per row and 4 to 6 per car. Each row has two hard plastic seats with a tall back and an individual lap bar per guest.

What Do You Need to Know About the Ride Experience for Expedition Everest? 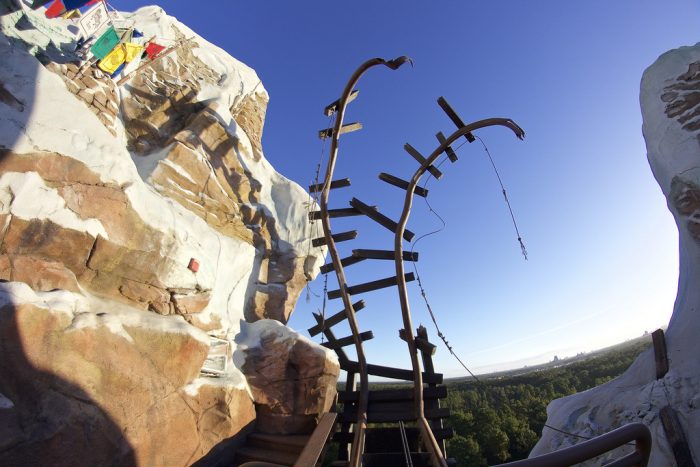 The ride experience begins peacefully enough, but that changes once the expedition train comes across torn up tracks. It was the Yeti! The train suddenly rockets backwards and into the mountain where guests get see the silhouette of the Yeti wreaking havoc. From here, the train goes forward and now in and out of the mountain before narrowly avoiding a close call with the legendary Yeti himself. For an optimal experience, ask to be seated up front—the first few rows offer the best front seat experience of any Disney coaster, indoor or outdoor. I personally suggest riding after dark. It’s one of those attractions which offers a different feel and experience after dark!

Expedition Everest eaches top speeds of 50 mph. It can be jerky with sudden stops and even intense, but it’s not nearly as jerky as older Magic Kingdom coasters and surprisingly smooth at times. This 4-minute coaster ride falls somewhere between Big Thunder Mountain Railroad and Rock n’ Roller Coaster in regards to thrill level due to its hills, turns, and high-speed plummets but no loops or inversions. 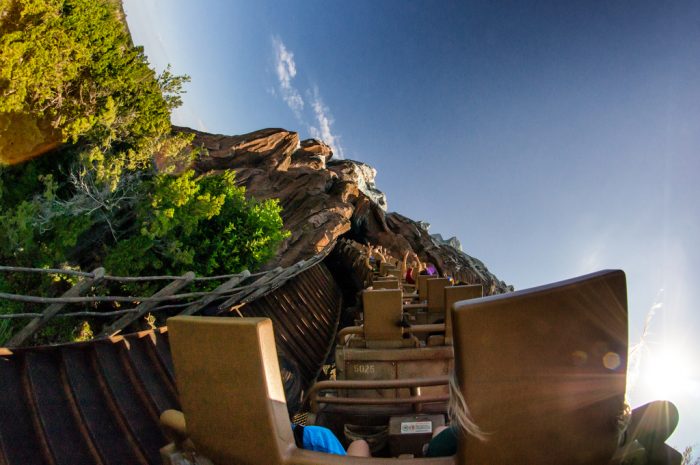 Towards the end of the ride, guests will get a glimpse of the Yeti leaning over the track. It happens fast and is very dark, so many guests fail to see him at all. Once upon a time, the audio-animatronic Yeti moved and swiped his arm towards guests zipping by; but for years, the Yeti has been in “B-Mode”. This means he’s stationary with a strobe effect to simulate movement. This is why many over the years have referred to the Yeti as the “Disco Yeti.”

What Do You Need to Know Accessibility for Expedition Everest?

Guests must transfer to the ride vehicle to experience Expedition Everest. It’s also important to note that service animals are not permitted on this attraction.

What Do You Need to Know About the Health and Safety Advisories for Expedition Everest?

For safety, you should be in good health and free from high blood pressure, heart, back or neck problems, motion sickness, or other conditions that could be aggravated by this adventure. Expectant mothers should not ride.

Those with a fear of heights should know the slow climb to the mountain offers dizzying views of the park below and other parks and their icons in the distance. Some consider it a beautiful view, but others may find it terrifying.

What Are the Height Restrictions for Expedition Everest? 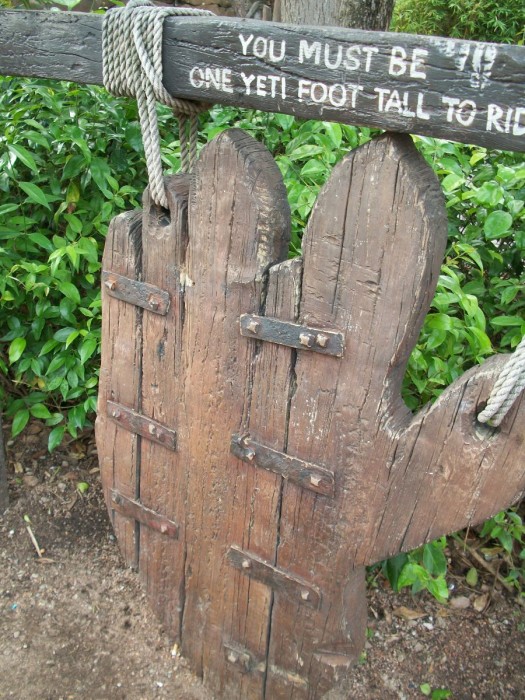 Guests must be at least 44 inches to experience Expedition Everest. This attraction also offers Rider Swap.

What Do You Need to Know About FastPass+ for Expedition Everest?

Animal Kingdom has a tiered FastPass+ system, meaning that the park restricts the number of FastPass+ reservations guests can make for its top tier attractions at Pandora – The World of Avatar. Fortunately, Expedition Everest belongs to the second tier. 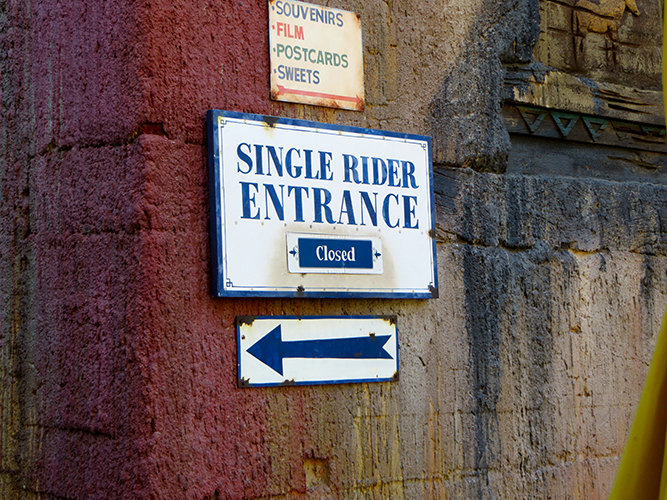 Since Expedition Everest is mostly an outdoor attraction, it will shut down for heavy rain or if there is severe weather or lightning in the area. It’s important to note some portions of the queue are exposed to the elements. There are mounted fans, but they don’t always help in the infamous Florida heat.

What’s the Best Time of Day to Ride Expedition Everest?

The shortest waits are almost always as soon as the park opens. Otherwise, try to ride Everest during the last hour the park is open. 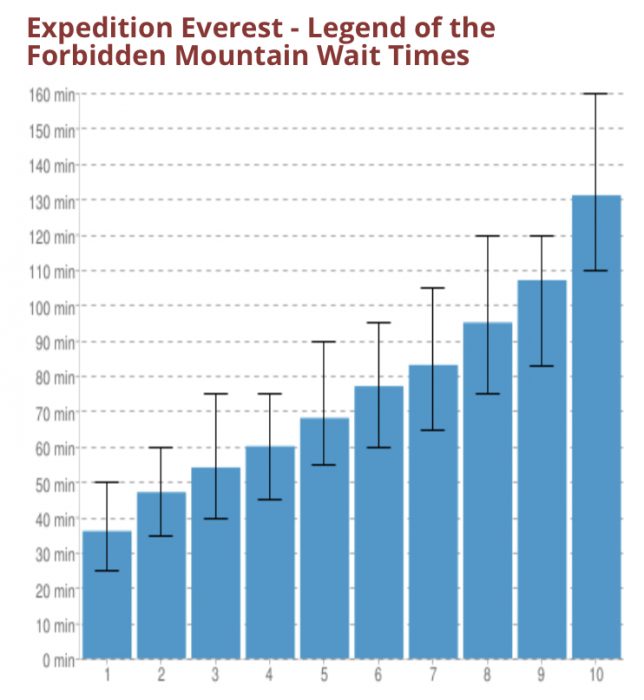 This chart shows you roughly how long you’ll wait for Expedition Everest – Legend of the Forbidden Mountain when you visit on a day with a given Disney’s Animal Kingdom Crowd Level. The blue bars represent the average “peak” wait time (that is, how long the line will be at its busiest). The bottom and top black lines represent the range of peak wait times to expect (for you fellow nerds out there: it’s the 5th percentile and 95th percentile of peak wait times). Please note that these are estimates, and for a better forecast for your travel dates, see Expedition Everest – Legend of the Forbidden Mountain Wait Times.

Did I answer all of your questions about Expedition Everest? Is this attraction at the top of your family’s vacation to-do list? Let us know in the comments.

5 thoughts on “Everything You Need to Know About Expedition Everest”