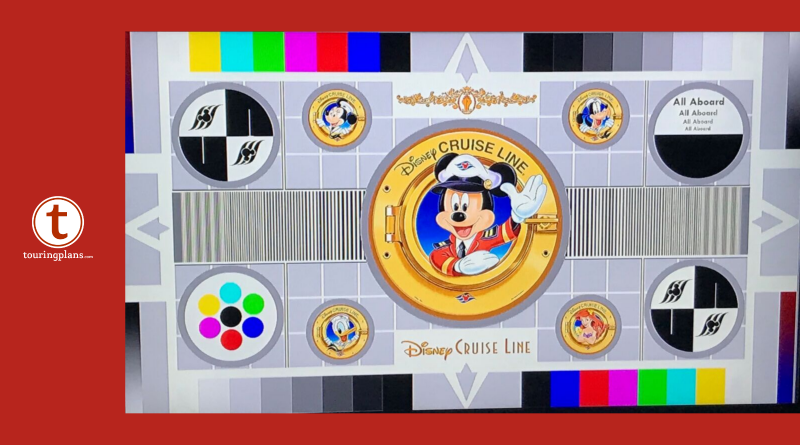 While you’re probably not booking a Disney Cruise with the idea of spending lots of time in front of your stateroom TV, there are lots of reasons, entertainment and otherwise, why you will want to turn on the television in your cabin. Here’s what you need to know.

How big is the TV in my stateroom?

Unless you’re staying in a suite, your DCL stateroom will have a modest 24″ TV. This is probably much smaller than what you’re used to in your home or even in most hotel rooms.

How many TVs are in my stateroom?

With the exception of suites and a small number of cabins with unconventional layouts (notably category 8A), there is one television per stateroom. It’s located in the center of the room, on a telescoping arm that allows it to pivot toward the couch or the bed.

If my kids are sleeping on the couch side of the room, can I watch TV without disturbing them?

Sort of. You’re correct that the sleep surfaces that would normally be used by children (twin-sized pull-down or pull-out beds) are located on one side of the room and the queen-sized bed normally used by adults is on the other side of the room. There is a heavy dividing curtain that can separate the two halves of the room, but with the TV extended there will be a bit of a gap in the curtain closure. Sound and some light will penetrate.

I can watch TV at home, why would I do this on the ship?

Well, sometimes after a long day in the sun, you just want to veg out for a while. If you’re traveling with young kids who go to sleep early, you may be stuck in your stateroom. If you become ill during your vacation, you may be quarantined to your stateroom.

What channels are on the TV?

In addition to TV programming, the ship televisions can access a variety of movies.

The movie situation is different on different ships.

On the Wonder, you’ll find several several channels that play a single film over and over in a constant loop. This will be a mix of children’s and adult programming. For example, when I sailed on the Wonder in January, some of the selections included Mama Mia Here We Go Again, Won’t You Be My Neighbor, Jurassic World Fallen Kingdom, Oceans Eight, and holiday holdovers Elf, A Christmas Story, and White Christmas.

Also on the Wonder, there are several channels that run a rotation of 2-4 different films in a constant loop. For example, the Disney Channel Original Movie station will show a loop of High School Musical, ZOMBIES, and Teen Beach Movie. (I don’t even want to tell you how many times I walked into my young adult daughters’ stateroom and found them glued to that channel.) Other channels are devoted to rotations of 2-4 Pixar films, Disney Nature films, classic Disney animated films, and so on.

The movie situation on the Dream, Fantasy, and Magic is much better. Rather than rotating loops of films, it’s much more like your home DVR or TiVo, but loaded with dozens of Disney, Pixar, Marvel, Star Wars, and related films. You can choose when to start the film (rather than waiting for the next time it comes up in the rotation) and you can pause, rewind, and fast forward, so you can take a break and come back to the film if desired.

You’ll also find first-run films showing in the ships’ theaters and on the FunnelVision screen by the pool, but the newer of those movies won’t be on the stateroom TVs.

[Note: Scott Sanders of The Disney Cruise Line Blog assures us that on-demand movies are coming to the Wonder soon. Thanks Scott!]

How is the reception?

The live news and sports stations have generally fine quality in the Caribbean, but may only be available sporadically or not at all depending on your itinerary, due to international broadcasting rights, or, more likely, poor satellite reception. To its credit, DCL is up front about this on its website.

Can I watch my own content on the stateroom TV?

There are USB and HDMI ports available on the back of the stateroom televisions. However, using something like a Roku or FireStick won’t work on the ship; the WiFi situation is unworkable. Assuming you had the correct cables and dongles with you, you could connect, say, a laptop to the TV to play stored content.

Wait, what happens if there’s a big event airing on a station that the stateroom TVs don’t carry?

Don’t worry. In addition to the stateroom TVs, there are screens in many of the bars and other public spaces on the ship. If a big event is happening, like the World Series, SuperBowl, or Oscars they’ll have the ship satellite system give access to that programming in the public spaces. Sometimes they’ll even show big events on the giant screen by the pool.

Also keep an eye on a “special events” channel on your stateroom TV. Even though the ships don’t normally carry, say, NBC or CBS, they may activate it on Sundays during football season.

What else can I access from my stateroom TV?

In addition to entertainment, there are several channels of information: instructions for the ship’s safety procedures, debarkation information, daily schedules, a map of the ship’s location, and guest services information. You can also see recordings of some of the nighttime theater shows in the evening (usually playing 4-5 times per night) and a morning wake-up show featuring your Cruise Director. 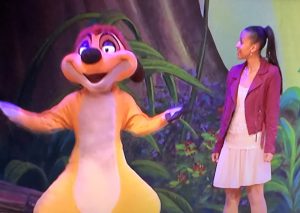 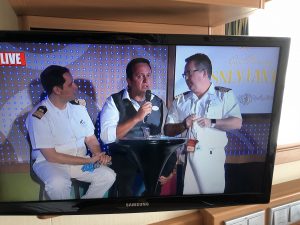 What have your experiences been with the DCL TV systems? Do you have additional questions? Let us know in the comments.