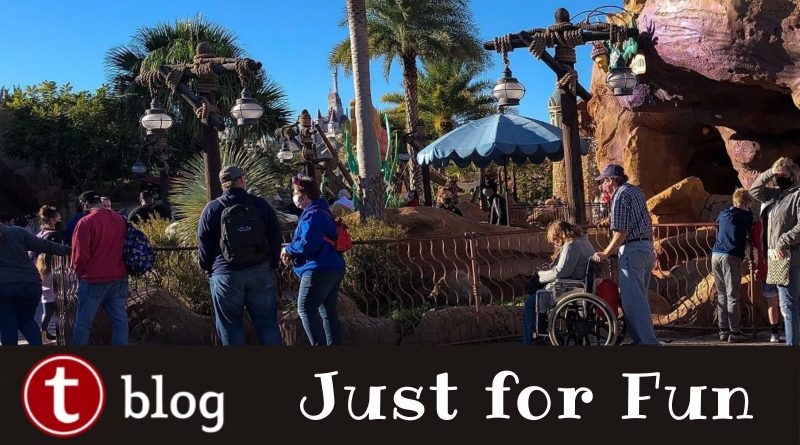 Waiting, they say, is the hardest part. This can be doubly true when you’re waiting in line for a ride at Disney. Make that triple if you are with someone under the age of 10…or someone like me who gets bored easily. These days, it is very easy to just whip out a smartphone and pull up one of any number of games or social media accounts to keep everyone occupied in line. Disney, being aware of this, has even started promoting their own Play Disney Parks app. But what if you want to take a few minutes to unplug–how do you stay entertained? Here’s some oldies but goodies when it comes to games you can play in line. Disney queues are the perfect place for a game of I Spy, especially when the line is moving slowly. To play, one person selects an object that is visible in the area (but does not tell the other players). That person says “I Spy with my Little Eye something that…” and gives some sort of clue about the item. They can mention its color, the letter it starts with, its size, or so on–something to give a starting point for the questions. The other players take turns either asking a question to help narrow down what the item might be or giving a guess about what the item is. (For instance, if the Spy says “I spy with my little eye something that is green.”, the first player could say “Is it something you wear?” or could ask “Is it my green water bottle?”) Everyone takes turns asking questions until someone names the item correctly and becomes the next Spy.

The alphabet game has been a long-standing favorite for many families, primarily because it is so easy to do. Each person goes in order with the next letter of the alphabet rapid-fire style saying something that relates to a theme. Disney characters is a popular choice (well, until you find out you’re stuck with the letter X!), but any theme can do–attractions, things you’d find a a Disney resort hotel, things from Disney movies. Get to the end of the alphabet? Start over again, but you can’t repeat whatever you used the first time through. It becomes a test of your memory as well as your fast thinking.

Going on a Disney Trip

How good is your guessing game? One player selects something for other players to guess and tells the player a general category (for instance, things you might find in a hotel room). Working as a team, the rest of the players have only 20 questions to guess what that item is by asking questions to narrow down what it is. (Is it soft? Is it smaller than a pillow? Does it need power to work?) If the players are unable to guess what the item is in 20 questions or less, the player who came up with the item picks the next person to be it.

There are many games that can be played with just your hands. Rock, Paper, Scissors is a very competitive one in our family, but recently I’ve seen people playing a game called Morra, and I think this may be my new favorite game. On the count of three, all players show a hand with any number of fingers showing (0-5) and simultaneously call out a number that they think will be the sum of all fingers showed by all players. Whoever gets the correct number wins a point. First person to three points wins a set. For instance, if player one shows a hand with two fingers, player two shows a hand with four fingers, and player three shows a hand with five fingers, if anyone called out eleven, they would win a point. It’s a very simple game to learn, but a very challenging game to win–a step beyond rock, paper, scissors.

Have you ever played games like these while waiting in line at Walt Disney World? Got any other suggestions? Let us know in the comments.