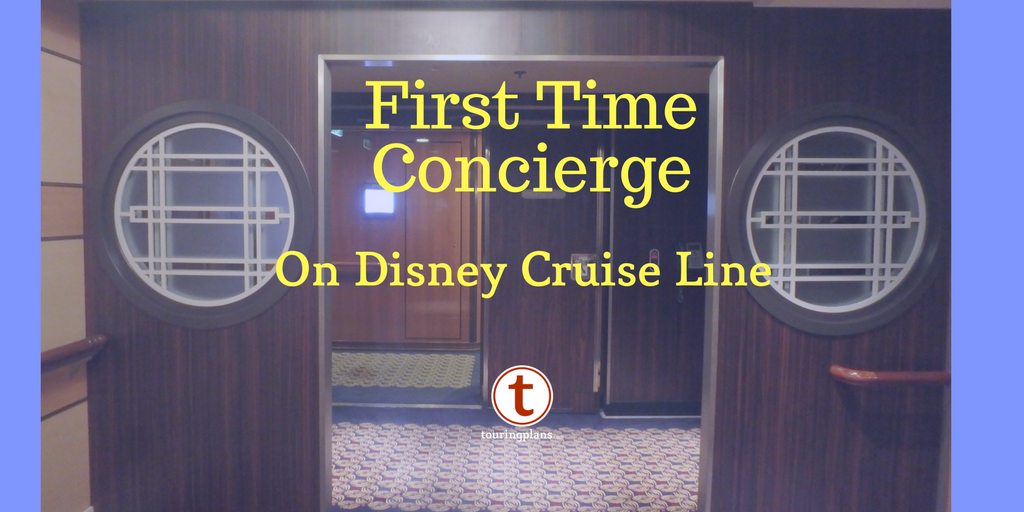 My husband and I just celebrated our tenth anniversary. We wanted to do something special for this milestone, so we booked a concierge room on the Disney Dream for our anniversary weekend. I had actually booked the upgrade as a secret from my husband, so any researching done ahead of time about what to expect was all on me. In short, we had a fantastic time, but there were a few things that I learned on our first time in concierge.

There’s a Lot of Stuff Included

The price difference between the highest-end non-concierge and a concierge room is fairly steep. We booked a category T one-bedroom suite, which we knew would provide us with a lot of space, and we figured there would be some extras. There were quite a few nice touches that don’t often get mentioned, however. In the closet, there were kid-sized hangers and a couple sachets to keep the walk-in closet (yes, you read that right!) from being musty. In addition, there were bathrobes for our use and slippers for us to use and keep. The closet also had a shoe shine tray, in case we had shoes needed to be shined. Because it was our anniversary, we arrived in the room to find a fruit arrangement on our coffee table. There were canned sodas and bottled water already chilling in our fridge. Bagged popcorn for the shows is included. A small internet package (beyond the 50 MB freebie package), included. Sunscreen is available on the sundeck. DVD rentals are included. Beer, wine, some mixed drinks (depending on what the bartender had), better-than-average coffee drinks, snacks (including mini desserts and hors d’oeuvres) throughout the day, unlimited canned soda and bottled water–all included. That doesn’t mention the amazing staff who go well above and beyond.

Even though so much is included, if there’s something that you want that isn’t mentioned, it never hurts to ask. I had seen mention online that if you are staying in a room that has a dining room table, you are able to order meals from the main dining room delivered to your stateroom. It wasn’t something that was mentioned, but when I asked, I was told that it absolutely could be done. Nothing like spending pirate night eating in your stateroom and watching Pirates of the Caribbean, eh?

Concierge Changes What You Do

The stateroom that we had, and the balcony that went with it, were simply gorgeous and HUGE. As a result, we didn’t spend as much time lounging around in deck chairs elsewhere because our private balcony loungers were better. The food served in the lounge was so wonderful, we were so full that we could have easily skipped Palo brunch and been fine with that. We did a lot more sitting in the lounge instead of spending time (and money at Vista and Cove Cafes). We didn’t eat in Cabanas–we brought the food back to our room. Normally, we get a Rainforest Room pass to make use of the rainfall showerheads, but since our stateroom had them in both bathrooms (oh, did I mention our stateroom had two full baths?), we skipped the Rainforest Room altogether. In short, any opportunity we had to make use of our room and the concierge-only facilities, we did. And that really changed the whole vibe of the cruise.

At the end of the cruise, we got the envelopes and slips for our servers and stateroom attendant, plus an envelope for concierge, but no slip or suggested amount. Even though you aren’t even strongly suggested to tip the concierge staff, I don’t know how anyone can have such an amazing experience with them and *not* want to leave a tip. Because we had no idea what was proper, we went with $20/day, but the amount you tip is completely up to you. The experience they make really justifies every penny that goes into those envelopes.

Yes, You Can Go Back to Non-Concierge Again

One thing I heard over and over and over again is that once you’ve sailed concierge, you can never go back to “normal” rooms. Right now, we have a cruise booked for December and another one booked for next July–neither of them are concierge. We did visit the future bookings desk to see how much the difference would be (and for one of them, it’s not only already sold out but the waiting list isn’t accepting additional names!). In the end, we did not opt to make a switch to concierge. We did discuss that, on a future cruise, we’d like to do it again–but we will be just fine sailing without concierge. It’s like staying at Walt Disney World. As DVC members, we stay at Animal Kingdom Lodge often, and it is amazing. Most recently, we booked a trip and stayed at Port Orleans French Quarter (a moderate resort) and had a wonderful time. If you can afford it, and if it fits into the way you want to cruise, concierge is wonderful. It can spoil you. But you can go back to “normal” cruising very easily–after all, you’re still on a Disney ship!

Do you have any questions about the concierge experience? Let me know in the comments.