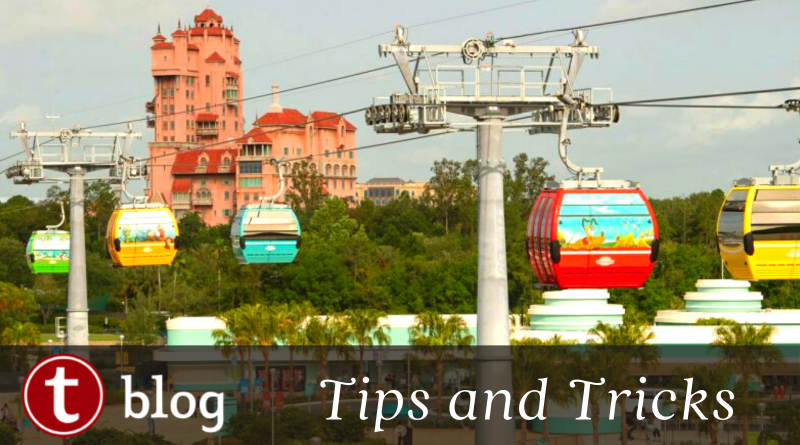 The Disney Skyliner is a high-in-the-sky transportation system that has caught the attention of Disney fans and visitors. Its colorful gondolas, some adorned with beloved characters, connect guests to multiple resorts and two theme parks. It had a bumpy start, but now the system is running smoothly. It is a unique system that is even more enjoyable when you’re prepared. Here are our top five tips for riding the Disney Skyliner.

I personally made the mistake of forgetting about rope drop time at EPCOT. I parked at Disney’s Hollywood Studios so I could use the Skyliner to go over to EPCOT. This method doesn’t really save any time, but since I only intended to visit World Showcase it was nice to enter EPCOT at International Gateway after a scenic ride. We arrived at the Caribbean Beach Station 20 minutes before park opening so there was a substantial line for the Skyliner. It took us about 15 minutes to get through the line.

Naturally, there is more demand right at closing time, after nighttime shows, so there may be a little wait at the EPCOT Skyliner station.

The first time I took my toddler son on board Disney Skyliner it did not occur to me that he might get a little scared or nervous. As we approached the station he was fascinated by the moving gondolas. Things went great until we boarded our gondola and it began the quick ascent from the station. The quick motion unsettled him and he immediately asked to go home. I talked him through it, pointing out the sights and assuring him we were okay. Then it occurred to me to point out the different characters on the exterior of many of the passing gondolas. By the time we were on our return trip at the end of the day he excitedly said “I love it!” as our gondola soared into the air.

30 thoughts on “Five Tips for Riding the Disney Skyliner”