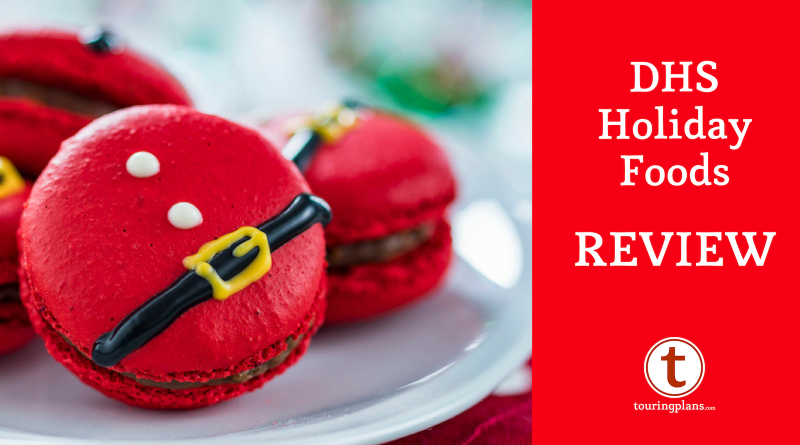 On November 8, Disney’s Hollywood Studios released holiday foods throughout the park as part of the Flurry of Fun promotion. The number of items is daunting but we gave it our best shot for you, dear readers.

There were a couple of stand-outs, several in the middle, and one that received the reaction of “this is what disappointment tastes like.”

Even though this was among the last items reviewed, Len declared “I could actually eat all of this.” Considering that he had to be shamed into continuing the reviews after the second stop (“you can’t quit; it’s your JOB to do this”), that’s some high praise. It tastes exactly how it sounds – like eggnog, with raspberry fruit and raspberry crunch for flavor.

The thing we knew would taste good that did:

We’re already fans of the lunchbox tarts at Woody’s. The seasonal flavor is heavy on the apple cinnamon and barely there on the cranberry, with a flaky crust and not overly sweet taste. At $3.29, this is a bargain to boot.

The photo Disney released of these looks fantastic. The reality isn’t quite the same. It was 85°F on the day we reviewed this, and they did not hold up well in the heat. The decorations were melting off as we received the macarons and the texture had already gone to the chewiness of a meringue that likes the Florida weather about as much as I do.

It’s a gingerbread man on a stick! The cookie is a perfect chewy gingerbread, the size is good for the price, and it’s super cute. What’s not to like?

The Chocolate Chestnut Cone wins this one for best presentation and seasonal appropriate flavor. It’s very light and good for people looking for a dessert that won’t weigh them down. The Spiced Cold Chocolate is a rich, tasty chocolate mousse and chocolate cake in a cup. That it’s served in a cup helps it hold up in the heat better than several of the desserts we tried. I’d be hard pressed to pick out a “spiced” flavor, but it’s altogether pleasing for chocolate fans. This is the most heavy of the three chocolate items listed here. The Chocolate Mousse Present is beautiful, but only tastes OK. The texture is airy and light, but the coating was melting before we finished with the photos.

Don’t even bother with this. There is nearly no caramel taste and the choux dough shell would get you kicked off a baking competition show.

Imagine a cheap fudge-cicle as a watery, icy beverage. Now half the chocolate flavor. That’s this. If you really want a cold, chocolate drink, just head to Starbucks and get a Frappucino. This isn’t just mediocre, it’s not good.

Festive Popcorn – $7.50 – at popcorn carts around the park and at Baseline Taphouse

This is caramel corn mixed with nuts, crispy pearls, candy-coated chocolates, and mini sugar cookies. We imagine it tastes about like that.

Sugar cookies large and small, and candied apples. They’re Instagram-friendly and you already know what they taste like.

Many, many cocktails. Some sounded tasty, others not so much, but it was a hot afternoon and day-drinking just wasn’t in the cards:

Gumdrop – Made with raspberry liqueur, raspberry vodka, pineapple and cranberry juices, and Sprite, available at The Hollywood Brown Derby Lounge and mobile bars near Echo Lake and Hollywood Scoops.

Christmas on the Beach – Blue liqueur, Caribbean rum, and pineapple and cranberry juices. At The Hollywood Brown Derby Lounge and mobile bars near Echo Lake and Hollywood Scoops.

So which of these are you looking forward to? Are you hoping for a video of us drinking our way through the cocktails? Talk about it in the comments.