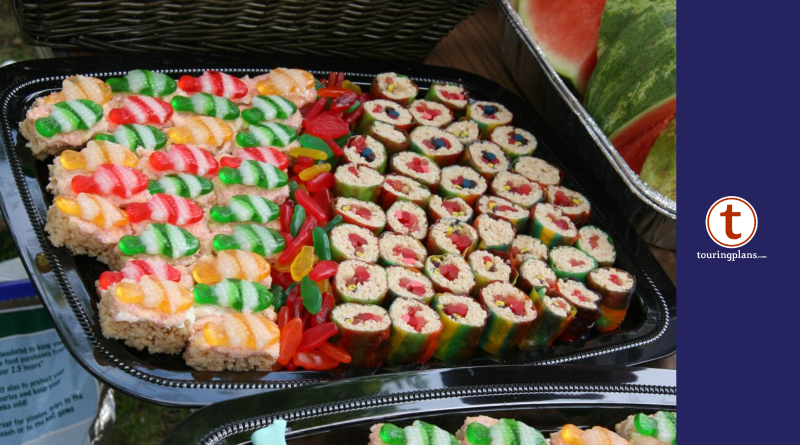 Sometime in 2005 or early 2006 (I really wish I could figure out which trip it was), I dined with my husband and three daughters, then elementary schoolers, at Walt Disney World’s California Grill.

The featured dessert on the Cali Grill kids’ menu was then, as it is now, “Signature Puffed Rice Sushi.” 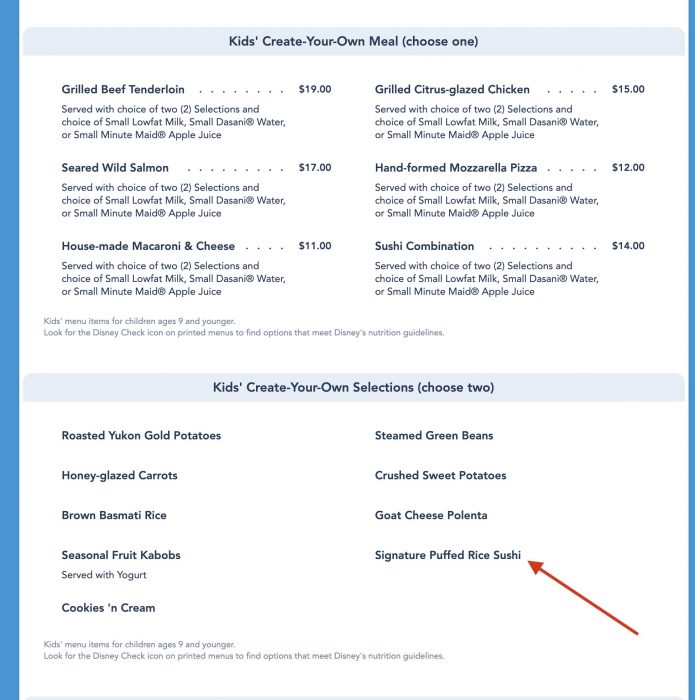 That description is so strange that it’s a wonder anyone ever orders it. But, our server encouraged us to do so – and this is what arrived. 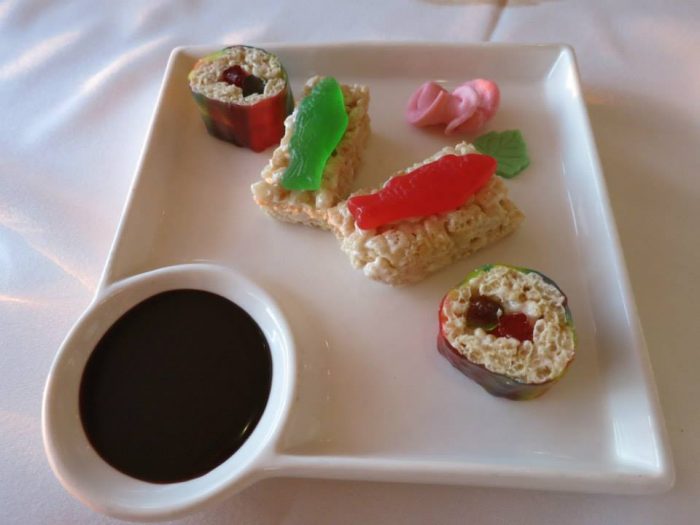 Now, in the days of Pinterest and Instagram, candy sushi is merely a moderate wow, but back in the mid-aughts candy sushi was a revelation. My family are big sushi eaters and every one of us was enchanted by this dish. As we raved about it, our server told us, “You know, you could easily make this at home.” And darnit, she was right. Candy sushi is incredibly easy to make at home. There is very little actual cooking involved. It’s all in the presentation.

Little did that California Grill server know, that one sentence has been responsible for hundreds of hours of my life and thousands of dollars raised for non-profits in my world.

I believe I made candy sushi at home once or twice before this, but the first photos I can find are from my twins’ end-of-year picnic for first grade. (They’re now finishing junior year of college.) This is what it looked like: 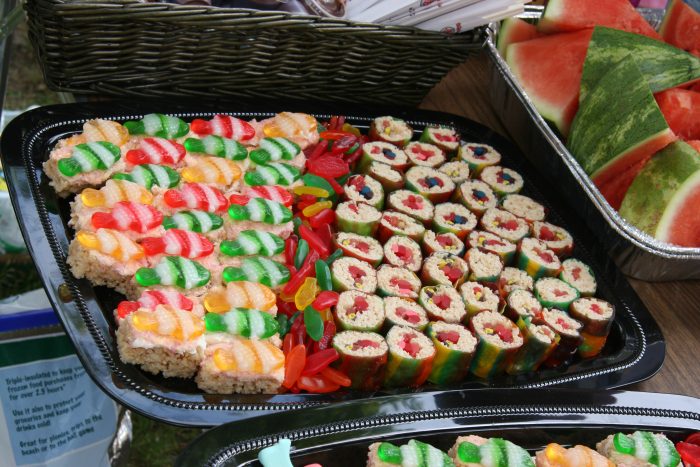 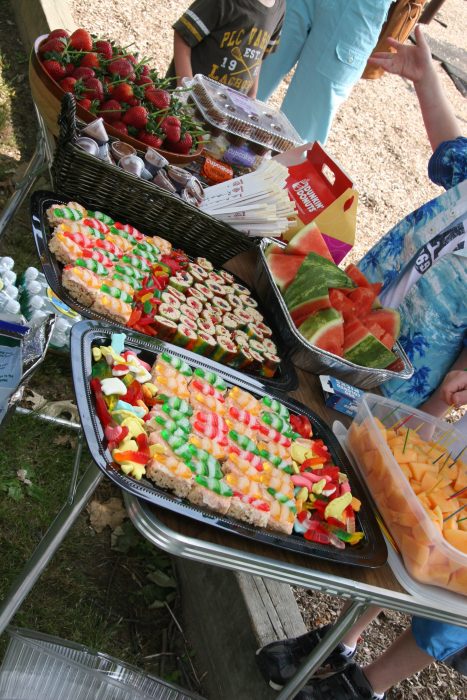 The basket between the “sushi” and the strawberries holds small portions of chocolate sauce (to imitate soy sauce) and disposable chopsticks.

Back in the day, this was revolutionary and the neighborhood kids asked me to make this for many school parties and events. I did, and eventually this became my signature dish: the one thing that I would make for every birthday, bake sale, or random celebration. This continued through my kids’ high school years, where I created bento-box-style individual trays of sushi that were sold at all manner of local fundraisers. Here are some examples — note variations that happened: using some coco krispies to simulate brown rice, new forms of gummy sea life added such as large gummy sharks, green salt water taffy “wasabi,” strips of dried mango to simulate ginger, a swipe of frosting and a dip into sprinkles to simulate roe, and so on. 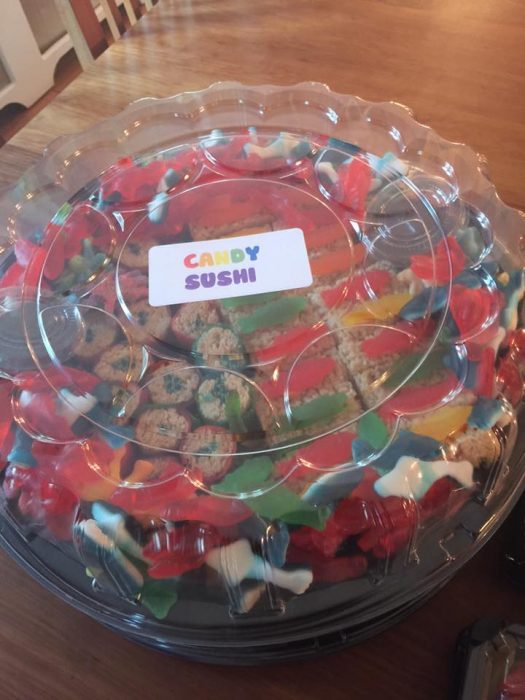 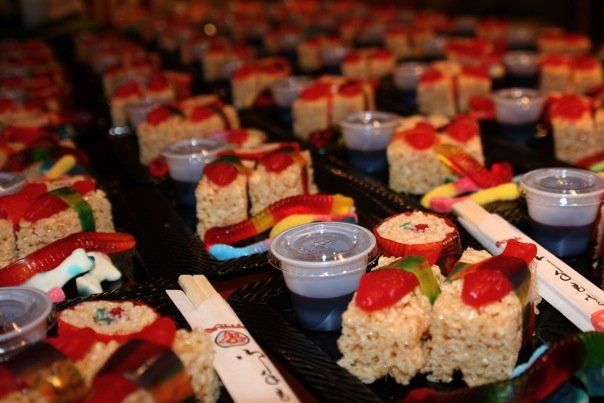 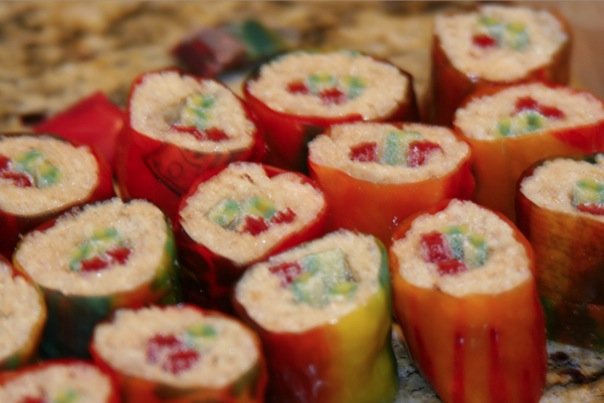 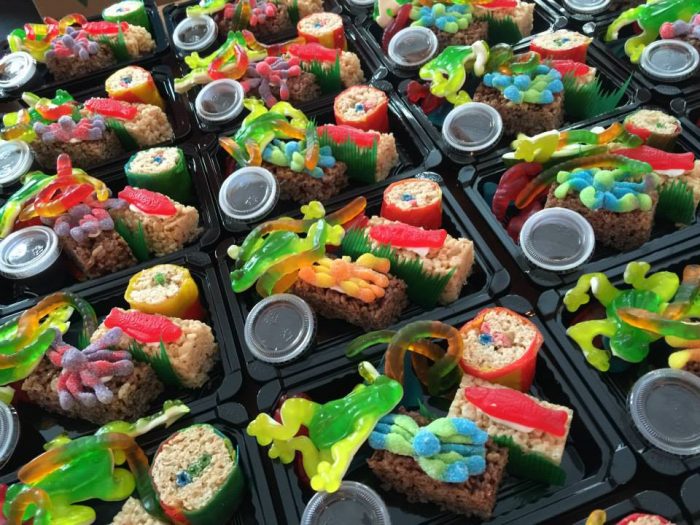 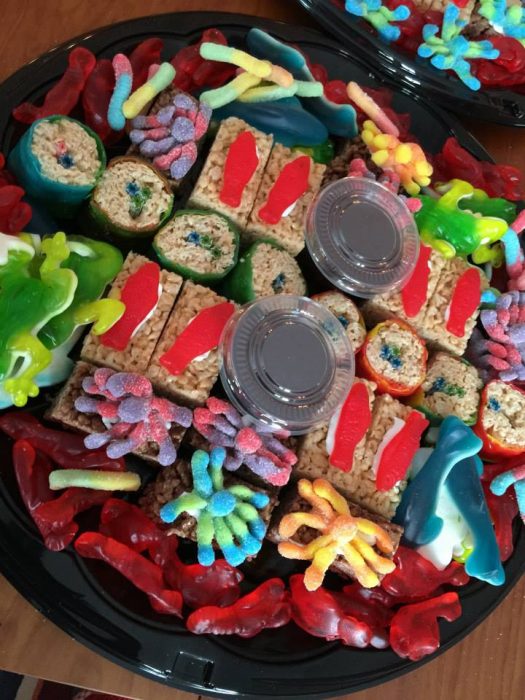 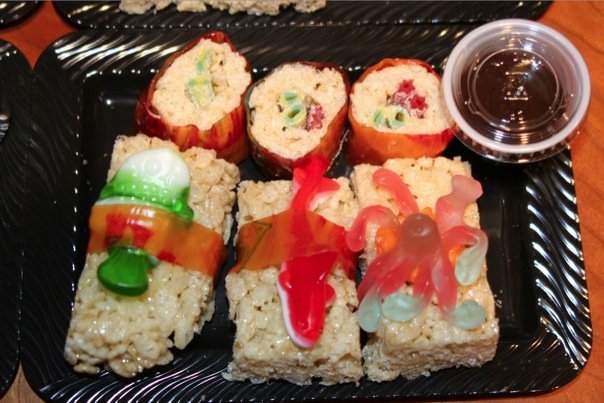 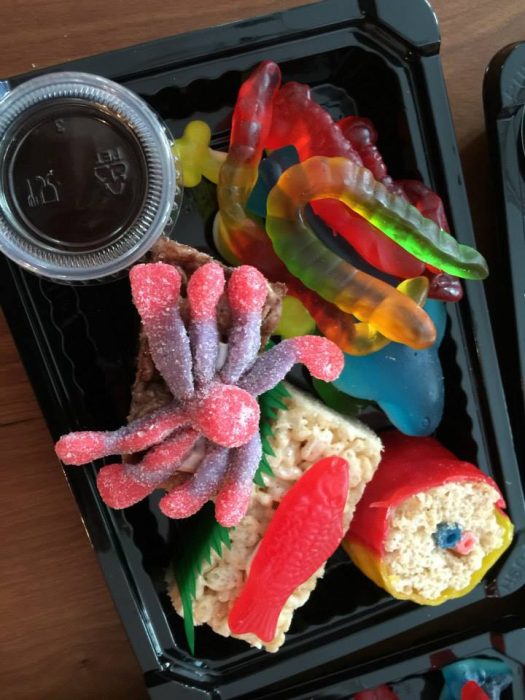 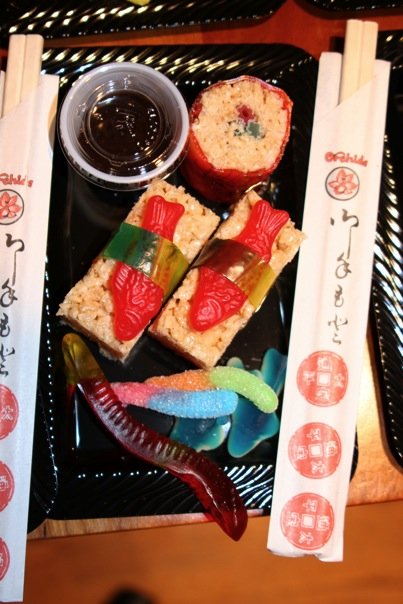 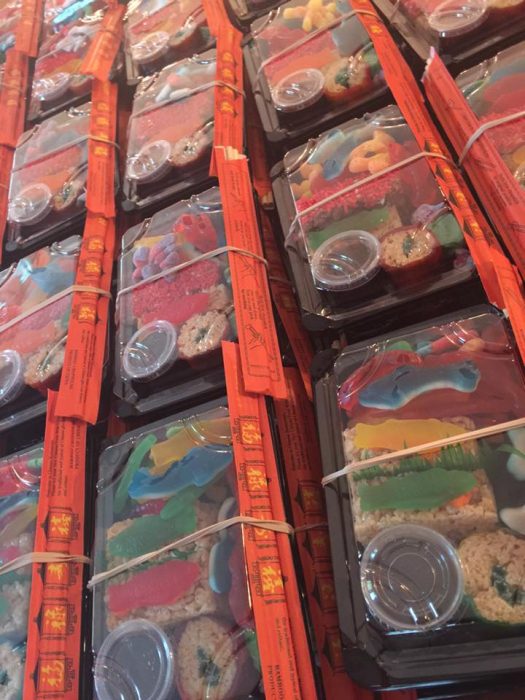 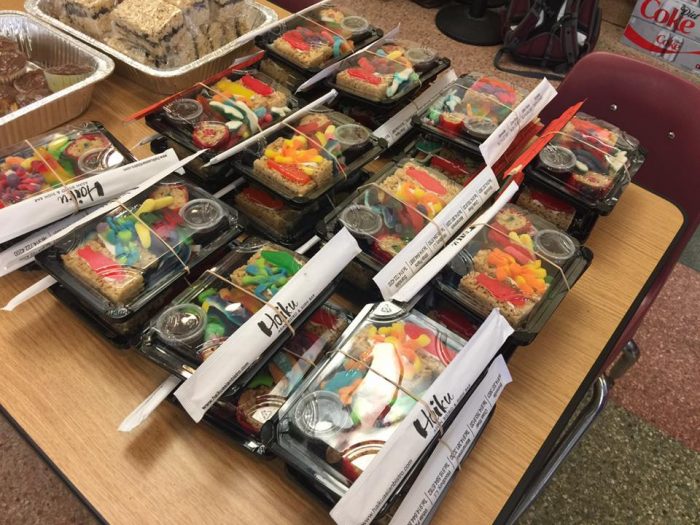 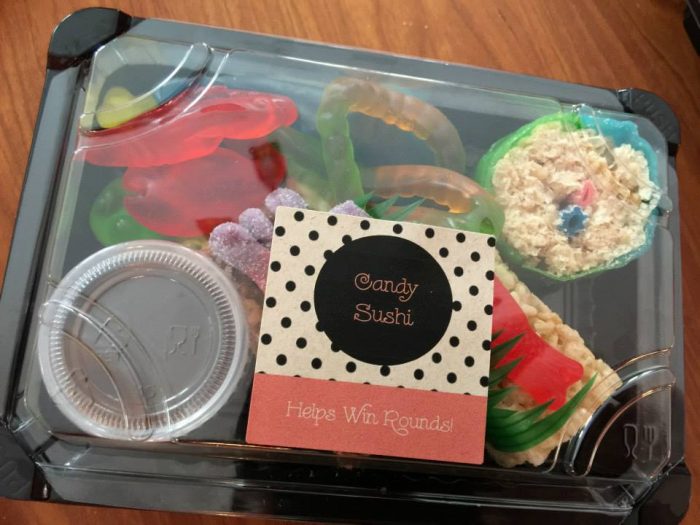 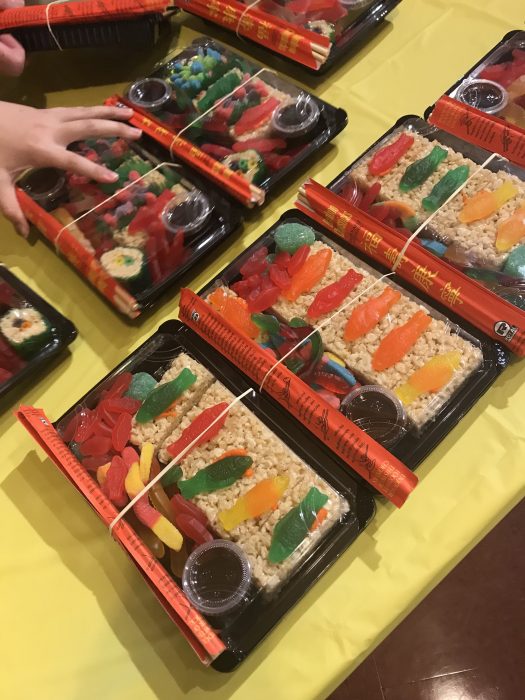 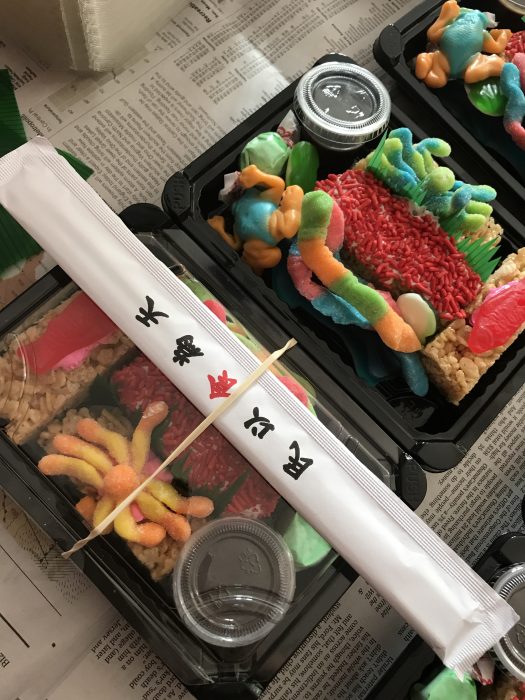 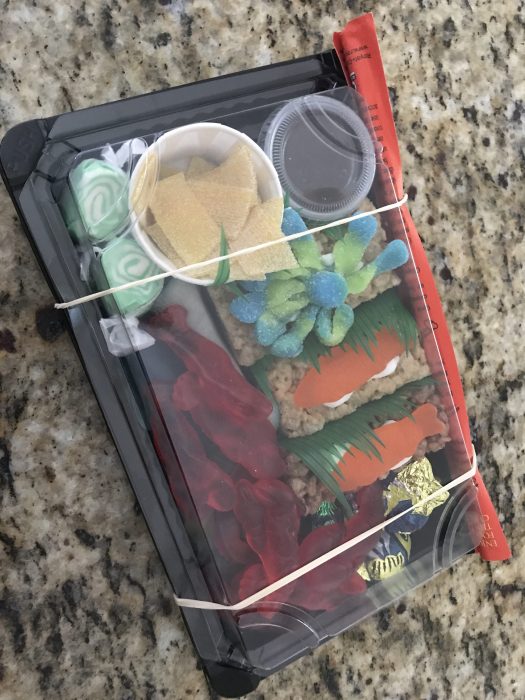 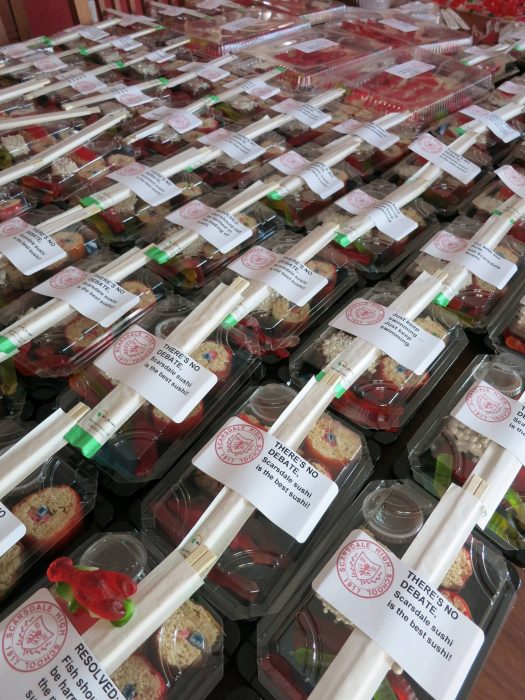 Somewhere along my candy sushi journey, after having made this for scores of events, this became a darling project on Pinterest. It’s no longer “my thing,” but still a crowd pleaser. While folks may have heard of it before, they were still often wowed by the presentation.

Then, in 2018, candy sushi came full circle back to Disney, when candy-sushi-making classes were first offered during the Epcot Food & Wine Festival, in the Land pavilion, near the Living with the Land attraction. 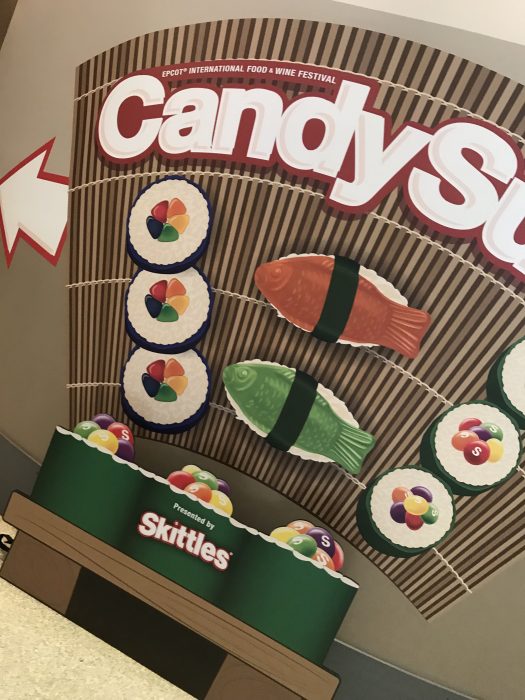 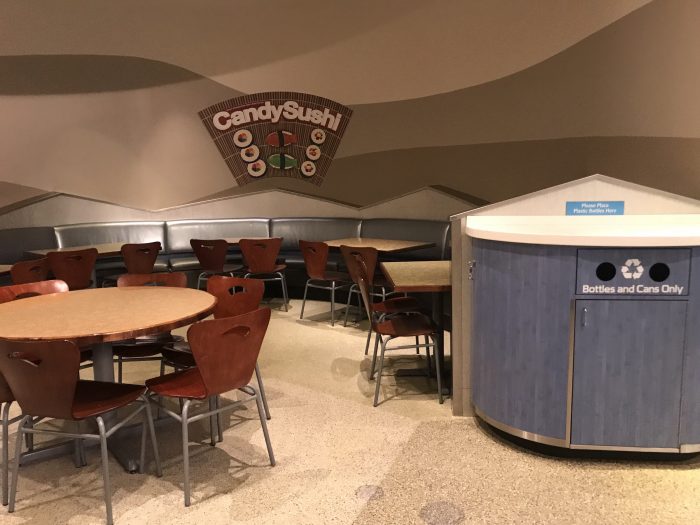 There are many YouTube videos on how to make various version of candy sushi, but the basic model the idea is to make Rice Krispie treats from the recipe on the box. Cut the treats into two-bite rectangles, top them with Swedish fish, and wrap with a fruit rollup. Everything else is styling.

I’m fortunate to live near several Asian markets where I can buy things like inexpensive disposable chopsticks in bulk, but everything you might need to fancify your candy sushi can also be found online. Candywarehouse.com stocks nearly every version of gummy sea creature, often in five pound bags. There are bulk chopsticks, portion cups, bento trays, and other items on Amazon, as well as many restaurant supply resources. Or, if you just want a few for a kids’ birthday party, you may be able to purchase a small quantity directly from your favorite local sushi restaurant. [Note, the above links are just suggestions to get you started, there are many other sizes/quantities/vendors for supplies.]

The moral of the story is – keep your eyes open at Disney World, you never know when something you see there can be incorporated into your regular life. Thank you Cali Grill server from 15-ish years ago, you made a big difference in my world.

Have you ever had something you saw or did at the Disney parks become a regular part of your daily life or identity? Please share in the comments.

4 thoughts on “Fun Stuff: How a California Grill Dessert Became My Signature Dish”