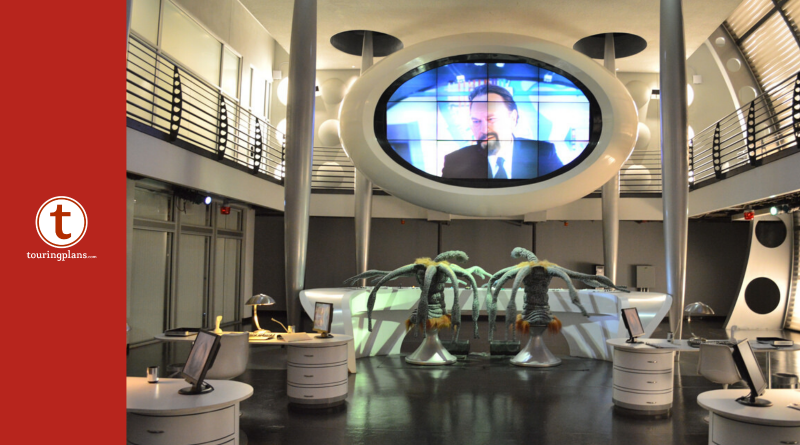 Today in Getting to Know Universal, we are covering the ins and outs of Men in Black Alien Attack (MIB for short) at Universal Studios Florida. Recently celebrating its 20th anniversary, this fan-favorite attraction takes you into the MIB training center to become one of their elite alien agents.

MIB sits on an expansion pad in the north-most portion of Universal Studios Orlando. Originally home to the set of Swamp Thing the land was then slotted for the east coast version of Jurassic Park: The Ride. Upon Jurassic Park’s transplant to the then-in-development Islands of Adventure, it was decided to build a new attraction based on the hit Amblin and Sony film Men in Black.

The facade for the attraction is THE UNIVERSE AND YOU!, a satirical take on 1964 World’s Fair attractions. We are introduced to our tour guide for the three-hour-long walking tour that asks the big questions about our role in the universe.

Our preshow is quickly hijacked by Agent Z (Rip Torn) and our guide is revealed to be a MIB agent. Guests are quickly ushered into an elevator where they enter the MIB Training Center. The queue passes alien figures, props from the movies, and even a re-creation of the alien immigration center from the movies.

Guests board six-person ride vehicles for training in a test range full of fake aliens. In a classic instance of “…and then something goes wrong”, our training is cut short and our vehicles are sent into downtown New York City to combat an alien invasion. Now we take aim at real aliens, with each successful hit activating a special effect and awarding points. Smaller, farther-away targets are worth more points while closer, larger targets are worth fewer points. We are not alone either, as a ride vehicle on a parallel track is also hunting down baddies.

After saving Earth all trainees’ scores are tallied up with one vehicle being determined the winner. Based on how well your group does, one of two endings will play out, but no matter what you will be neuralyzed and dropped off at the end of THE UNIVERSE AND YOU.

Men in Black Alien Attack is quirky, charming, and a blast to ride. With a high amount of re-rideability to get the highest score, the attraction has garnered a large fandom in the community. Tips and tricks are available online for those looking to hone their skills. Even if video game aspects are not your cup of coffee, there is enough to see that it is worth your time.

Between MIB and Disney’s Buzz Lightyear, Toy Story Mania, and Millennium Falcon, it is my opinion that MIB is the best of the interactive rides. It is the most accessible, fun, and well designed of the four attractions and is a must-do for any trip to Universal Studios Florida.

MIB’s dual load setup means this attraction has a high guest throughput. Touring Plans recommends riding MIB within the first two hours the park is open. Queue estimation for MIB can be tricky to gauge, sometimes there is a line outside but the interior queue is empty.

The attraction participates in Universal Express and offers a Single Rider line, perfect for those wishing to re-ride the attraction again and again.