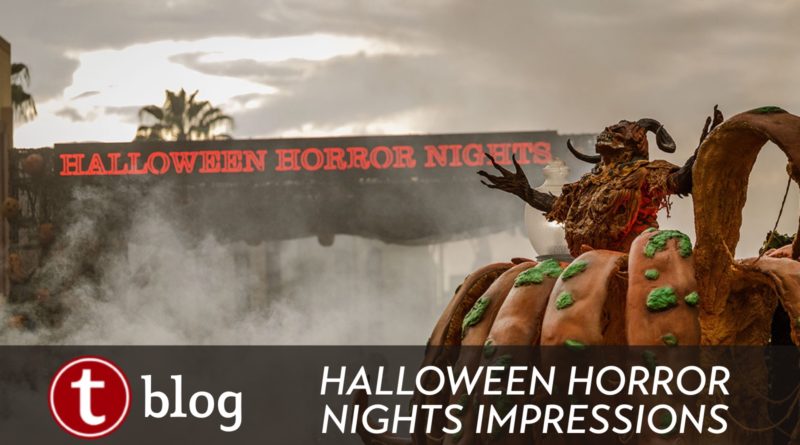 Halloween Horror Nights is back for its 31st year, and Universal is leaning into that classic Halloween flavor. We experienced haunted houses based on The Weeknd, Michael Myers, Universal’s Monsters, the Blumhouse films, and new original concepts. This article will offer our thoughts on this year’s event, including our opinions on the haunted houses, shows, food, drinks, and more.

Universal’s merchandise proclaims “Halloween Is Every Day” and this year’s event is made for those who celebrate 365 days a year. Whereas prior years focused on that season’s popular dark horror IPs this year HHN embraced the classical spooky.  Scare zones and houses are based on witches, bugs, ghosts, and trick-or-treating. The food tents are decorated like suburban houses after a Spirit Halloween run and projected vines and pumpkins cover the attraction buildings. Even the music is more of a party vibe than the prior year’s synth-driven electronic music or heavy metal.

The haunted house of the year is Dead Man’s Pier: Winter’s Wake. Based on a scare zone from five years ago, Winter’s Wake takes guests through a fishing village haunted by the deceased crew of a failed fishing expedition. As we make our way through the pier we discover we are not alone as a siren playing the violin recalls the dead. Atmospheric with fantastic scares, we believe Dead Man’s Pier is a do not miss house and is a must-do for the event. (★★★★★)

Universal Monsters: Legends Collide finds us in the middle of a battle for an amulet that will cure Dracula, the Wolfman, or the Mummy of their curses. Guests walk through The Mummy’s tomb fending off the undead, the transformed, and the bloodsuckers. At the end only one will win, who will it be? Universal Monsters is not to be missed. (★★★★★)

Descendants of Destruction takes us deep into the New York City underground. Here what remains of humanity has become feral, fighting it out simply for survival. The house features fun set pieces, like a subway train, and a very intense cast. (★★★★ 1/2)

The Weeknd: After Hours Nightmare might not be your first choice for a Halloween event, but his After Hours music videos blur the line between horror and the dark comedy of the movie of the same name. Walk into The Weeknd’s mind, from decapitated performers to horrific plastic surgery, the nightmares of The Weeknd escape in the end to stalking us all. (★★★★)

Fiesta de Chupacabra finally brings the Puerto Rican mythical creature to HHN. The locals are luring us, poor tourists, into town with promises of a celebration, except we are the party favors. The beast must be fed and we are the sacrifices. The house features several cool puppet chupacabras and great sets. (★★★★)

Universal could not celebrate the 31st year of the event without Halloween. Based on the 1978 John Carpenter classic witness Michael Myers’ grizzly murders and become his next target. We enjoyed the house but felt it lacked in some set pieces and effects. (★★★★)

Bugs Eaten Alive starts with a high-concept premise, a 1950s Home of the Future exhibit goes wrong and the pesticides instead make the bugs mutate. While the house is good the long walk to it always puts people in a sour mood. (★★★ 1/2)

The Horror of Blumhouse (★★★) brings the movies Freaky and Black Phone to the event, but some odd choices and a weak Freaky segment prevent it from taking off. Hellblock Horror (★★★) is a monster prison riot full of call-backs but the execution is lacking. Finally, Spirits of the Coven (★★★) starts out fun with a witch speakeasy full of actors but by the end, you are just walking through storage cellars.

Scare zones have vastly improved this year. Universal’s cancellation of the daytime parade opened up the streets for elaborate scare zone sets, including full-sized parade floats in New York. Sweet Revenge and Graveyard Deadly Unrest (★★★★★) are the two best zones of the year, each featuring many props, scare actors, and cool effects. Conjur the Dark and Scarecrow Cursed Soil (★★★★) are less ambitious scare zones but still delivered scares and atmosphere, we especially like the scarecrow actors. Horrors of Halloween (★★★ 1/2) is small and lacks the ambition of the other zones but gets points for having the Pumpkin Lord front and center.

Halloween Nightmare Fuel (★★★★★) returns this year with new magic illusions, dancers, fire effects, and aerialists. The Dreamer falls asleep and is surrounded by nightmare figures who just so happen to all be extremely attractive, fit, and dressed in skimpy clothing. The show is a lot of fun and receives standing ovations, but it is the most adult show in Orlando. Not to be missed.

Ghoulish! A Halloween Tale (★★★★ 1/2) replaces the Marathon of Mayhem lagoon shows with a new concept. Now guests are listening to a haunted story record that takes guests through a haunted house. Music, lasers, fountains, and projections create a trippy and crazy show that climaxes with music by The Weeknd. Not to be missed.

Let us start with the surefire hit – the Dead Coconut Club. Universal rethemed and opened the Red Coconut Club as a new Universal Monsters-centric experience. The menu features several themed cocktails (all very good and not overly loaded with fruit juices), beer, wine, and a full liquor bar. No food is provided, but snag a pizza from Red Oven downstairs if you are feeling peckish. A trio of singers performs on select weekends for entertainment. We had a blast visiting the Dead Coconut Club and enjoyed the vintage monster portraits on the wall (including two famous robots). Dead Coconut Club is open on event nights and is located in CityWalk from 5:00 pm to 1:00 am, event admission is not required to visit.

Food at the event is mixed. Some of the fried options, including the chicken bites, are receiving mixed reviews due to cooking inconsistencies. The new Pizza Skulls were a hit with my touring group, but all the new drinks at the event are a miss. Of course, Pizza Fries return at the KidZone Pizza Company and Louie’s. If there is a food option that draws your interest we suggest purchasing early in the event to avoid lines and receive fresh preparations.

The Halloween haunted house opens around 5:35 pm, with them filling the queue starting around 5:30 pm. If you are doing stay and scream we advise arriving no later than 4:30 pm at the New York stay and scream location and queueing for Halloween.

After experiencing then queue up for Dead Man’s Pier: Winter’s Wake which will open around 6:00 pm. Day guests will start entering around the time you depart Winter’s Wake so make your way to the back of the park to hit Bugs, Descendants, and Universal Monsters.

At this time it should be getting around 7:30 pm, see the first Halloween Nightmare Fuel show at 8:00 pm and the first Ghoulish! at 9:00 pm. After the shows escape to CityWalk, enjoy the scare zones, or return to the hotel for a recharge. Return slightly before midnight and visit the remaining houses starting with Hellblock Horror. Save Blumhouse and The Weeknd for the last houses of the night.

Universal has produced yet another over-the-top Halloween event and one that deserves all the accolades and awards. The classic Halloween branding will go down as one of the most unique the event has ever done and everyone will remember Dead Man’s Pier. We loved this year’s event and cannot wait to go back next year for #HHN32.

Have you attended Halloween Horror Nights 31 yet? What is your favorite house? Which scare zone did you enjoy the most? Leave your thoughts in the comments below!