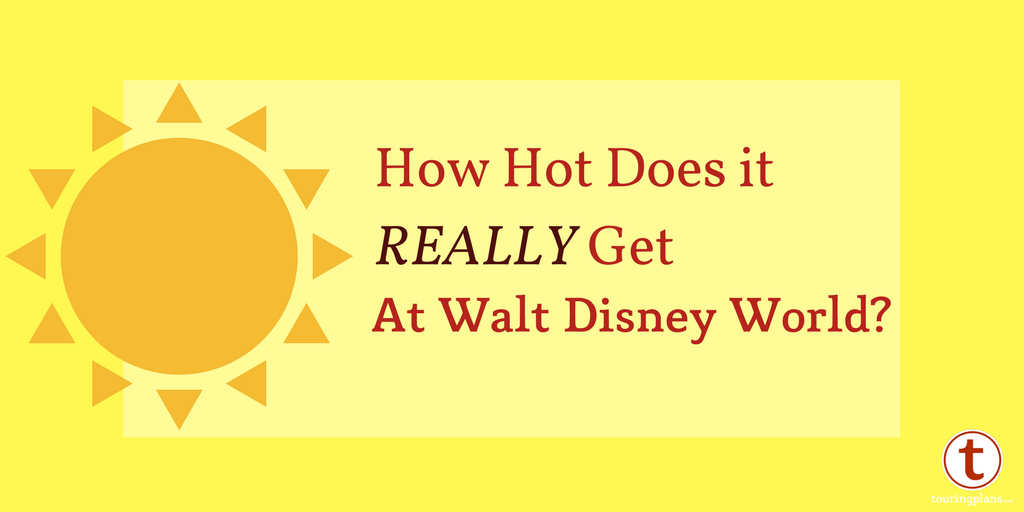 I spent the evening in Pandora a few days ago to see how it’s all aged over the summer. (Short answer: reasonably well.) But the big thing I noticed was how hot it was. At 7 p.m. the temperature read 89℉, but fam, it felt much hotter than that. I wanted to know why.

Now, I’m an expert on a lot of things. You know that. I know that. But temperature is not one of them. So I did some research.

Air Temperature Is A Lie (Sort of)

The first thing I learned is that temperatures are measured in the shade, not in the sun. So when your iPhone weather app says it’s going to be 95℉ in Orlando tomorrow, it’ll be 95 in the shade. It’s worth pointing out that most of Walt Disney World isn’t, you know, cool shaded pathways. It’s worth asking how much hotter it’ll be in the sun.

To answer that question we enlisted the help of TouringPlans’ own Brandon Glover, to serve as our ceremonial rotisserie chicken. We equipped Brandon with two digital thermometers – one white and one black – to measure the temperature you’d feel standing in direct sunlight and wearing light or dark clothes. And we sent Brandon to the Magic Kingdom.

Here are the temperatures Brandon recorded at various places around the Magic Kingdom, and their difference to the air temperature as reported by WeatherUnderground:

Not sure what’s happening with that Stitch measurement. I suspect aliens.  Outside of that, though, the temperature you’ll feel in the sun averages 2.2 degrees warmer than reported, and up to 8 degrees warmer in some places.

It’s not the heat, it’s the humidity

Another thing I learned is that meteorologists have an index similar to winter’s wind chill, but for summer. It’s called the Heat Index, and it takes humidity into account. The Heat Index tells you how hot it “feels like“, factoring in both the air (shade) temperature and the relative humidity. We’ve used NOAA’s Heat Index Calculator to determine the Heat Index in direct sunlight.

Here’s a graph showing the air temperature in the shade, the average temperature recorded by our thermometers, and the Heat Index in the sun, for the same places in the Magic Kingdom:

The Magic Kingdom can feel up to 30 degrees warmer than the reported air temperature, factoring in sunlight and humidity. For this one day in the Magic Kingdom, the “feels like” temperature averaged above 110℉ for much of the afternoon. It even felt hotter than 100℉ in the shade once humidity was considered.

This is just one day in the Magic Kingdom, but summer heat and humidity are fairly consistent in Orlando. It’s reasonable to prepare for average “feels like” summer temperatures in the Magic Kingdom of 115℉ or more. That includes lots of water, light-colored, loose clothing, sunscreen, and hats, and taking advantage of shade and air-conditioning where possible.

One last tip: the ground absorbs a lot of heat, and can be significantly warmer than the air in the afternoon. If you’ve got kids in a stroller, they’ll be closer to the ground and its radiant heat. (We’re measuring this for a follow-up blog post.) Keep a close eye on the kids, making sure they’re hydrated well and get a chance to cool off.