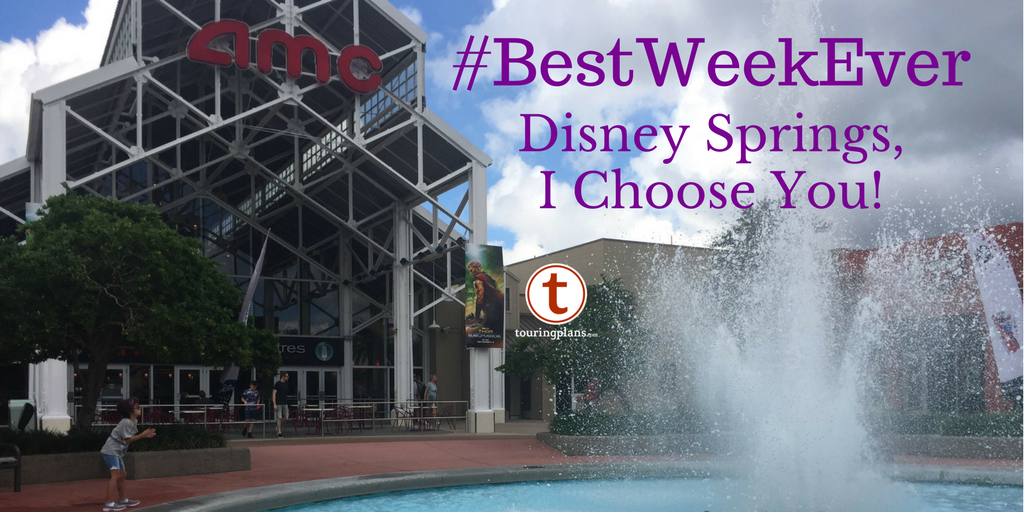 Greetings, all. This week’s Best Week Ever came about because of my daughter’s love of Pokémon. For those who are not in the know (which, admittedly, included me until last week), the 20th Pokémon movie has come to American theaters in a limited release–as in four days only (and only two of the days offering a rare Pokémon card for those who saw the movie). What does this have to do with Disney? Well, one of the theaters holding a showing of the film was the AMC at Disney Springs. I’m not much of a movie theater person–not counting movies I’ve seen on DCL, I generally see one or two movies in theaters per year at most. It was a perfect Daddy and Daughter date, though…and it gave me some time to wander around Disney Springs for some solo window shopping. Woo hoo!

We arrived early to grab lunch before the movie. With the time change, everything still felt a bit out of whack, and so we had more time for lunch than we intended. Originally, we had thought about just grabbing a bite at Blaze, but we decided to switch things up and grab lunch at Splitsville. I do enjoy the food there, and almost always order this lovely sushi roll as my meal. With the other two of my party heading into the theater, I decided to take the water taxi over to The Marketplace and then walk my way back. By the time I would get back, they should be done with the movie, and we’d head on home. I love taking the water taxi any chance I get. The view is beautiful and it is such a peaceful ride. I prefer wandering around The Marketplace and The Landing more than around Town Center because the shops in those areas are more my speed. One of my favorite shops to wander through is Chapel Hats. I’m not much of a hat person, but if I was, that’s where I’d be shopping. (And one of these days I *will* buy myself a fascinator!) But I almost bought a hat there on this day. For any Minnie Mouse fans, check out this beauty. Wouldn’t the ones on the ends look great with a red and white polka dot dress for Dapper Day? Part of my wandering was figuring out if there was anything I needed to add on my holiday shopping list. This hammock really looked like it might find a place on my list. Wouldn’t this be perfect for these lovely Florida winter days? As I was wandering around, I heard a lot of people who were visiting Disney Springs for the first time talking about how beautiful the springs themselves are. If I get the hammock for the back porch, I wonder if I could do this with my swimming pool…. I stopped in Arribas Brothers to take a look at the amazingly beautiful castle that they have in there (which costs more than my first two cars combined) but I hadn’t seen this Cinderella piece before. Pictures don’t do it justice–the detail in it is stunning. It’s made by Lladro of Spain, and is number 798. Have no fear–it will probably still be there when you visit next time. The price? A jaw-dropping $33,000. I quickly left the store for fear that I’d end up breaking something like that. They don’t have any You Break It You Bought It signs in there, right? My next stop was the Marketplace Co-Op. There was a decent crowd inside, but I was mainly looking at the travel area for a neck pillow for an upcoming trip. I don’t know what it is about the mannequins in there, *every* *single* *time* I catch a glimpse of them out of the corner of my eye and mistake them for real people. If Marketplace Co-Op was busy, World of Disney was certifiably crazy. There really wasn’t room to walk around, and so I quickly passed through, but this little critter caught my eye. Next stop was the Lego store, mainly to take a look at the display for one Lego set that is both awesome and something I actually don’t want because I have no idea what I’d do with it. May I present to you, the Millennium Falcon. This massive Lego set is absolutely amazing–and expensive. (It’ll set you back $800 for this kit which has more than 7,500 pieces.) Keeping with the Star Wars theme, outside they were having a building event. Kids and adults could come in, follow directions on the table to make a specific type of piece (basically a large brick), and the piece was added to giant sculptures that were being constructed throughout the day. At the end, you got a certificate to show that you played a hand in the building project. As soon as my husband and daughter got out of the movie, I brought them over to the Lego store so they could participate. I’m hopeful that when we make a visit to Disney Springs soon that they’ll still have the completed sculptures there so we can see how the finished products looked. It really was a cool thing to be a part of. Oh, and the movie? Apparently it was surprisingly good–a partial retelling of the very beginning of the animated series, but with new elements thrown in for a new generation. I have no doubt my daughter will be telling her kids someday about how she went and saw this movie. It was a wonderful outing for daddy and daughter and I got to enjoy some quite time with a few thousand fellow Disney Springs shoppers. But before I go, I did want to share one interesting sign I found in my travels–this from the Levi’s store. I’m just going to leave that right there….

And until next time, whatever you’re doing, keep trying to have our own Best Week Ever.