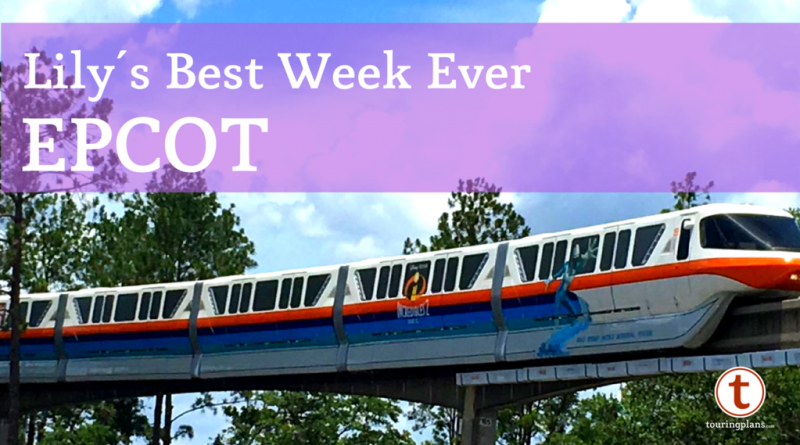 My name is Lily Mascardo. I am eight years old. My mom, Julia Mascardo, was one of the people who wrote the Best Week Ever articles, but with her new job, she’s been really busy to write them. She asked me if I would like to take pictures and write articles about my weeks this summer. I said yes, but only if she did the typing for me because I type very slowly.

This week I went to Epcot. Here’s what I saw and did. This is Spaceship Earth. It’s the symbol for Epcot, and you see it all the time when you see pictures of Epcot. That’s why I took the picture, because I think you have to take the picture when you get there, right? Today we were going to The Land to see Behind the Seeds. I haven’t done it before, so this was my first time. I was excited to do it because Living with the Land is one of my favorite rides in Epcot. This is the biology lab in Living with the Land. They do plant tests and experiments. The day we went there, they were studying plums to make more healthy plum trees. This was my favorite part of the tour. This plant is named Stanley. He is a Sensitive Plant. When you touch it, the leaves close up. In the middle of the photo, you can see where I got to touch the leaf and it closed up halfway. In a hurricane, when it gets shook a lot, it closes up all its leaves. It looks a lot like a fern. This is a picture of a tomato plant. Each plant in the greenhouse has its name and birthday on it. This one is called Felicity and it was seeded on December 10, 2017. This is a picture of a passionfruit flower that got handed out so we could smell it. It smelled kind of like perfume. It looks like a flower with roots coming out of its petals. This is a picture of a banana bunch. I learned on the tour that there is a type of banana called an ice cream banana. The tour guide said that they were really sweet and yummy. They have a lot of different types of bananas in the greenhouse. There aren’t very many kinds of bananas that you can buy at the grocery store, though. After the tour, we went on Living with the Land, the original ride in The Land. Water lilies are one of my favorite plants. I’ll let you guess why! This is a picture of the catfish. You can tell they are catfish because they have whiskers. Meow. After the ride, we were hungry and got lunch at Sunshine Seasons. My mom and dad had tuna noodle salad. I had macaroni and cheese. Which would you like to eat? They have a Millennial Pink Cupcake at Starbucks. None of us got it, though. Instead, we all got Frappuccino drinks. Mom got a Serious Strawberry. Dad got Triple Mocha. I got a Vanilla Bean Frappuccino with whipped cream and mocha syrup. That’s my regular order. It tastes super good on a hot day! While we drank our drinks, we went over to the under construction Guardians of the Galaxy ride. You can see them putting up the steel for the new building near the trees.

This is a good view of the building from the front entrance. It’s going to be super duper tall when it is done. I will not ride on the ride when it is done because I do not like roller coasters! This was my day at Epcot. There’s so much to do and learn. I would recommend going on the Behind the Seeds tour because you can learn a lot. I recommend Frappuccinos, too!

Lily Mascardo is a rising third grader and lives with her dad, mom, and two cats in a house behind Magic Kingdom.