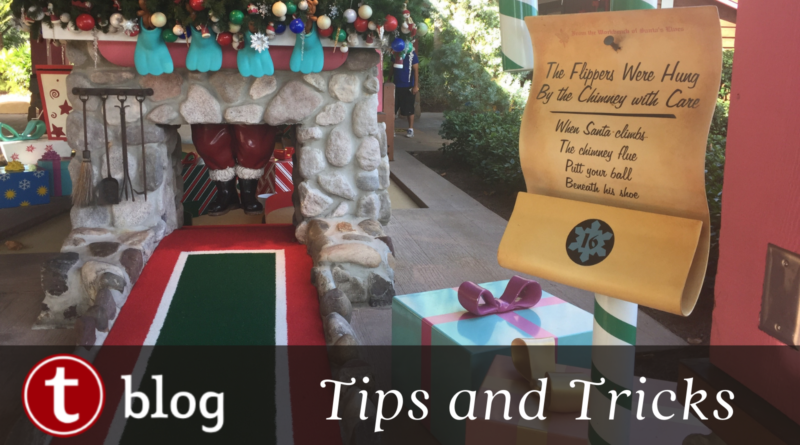 Miniature golf is famous for challenging players to hit balls through windmills, but it can be even more challenging to play an enjoyable round with your kids.  Putt-putt can try kids’ patience as well as their skill, and more than once I’ve witnessed fraught scenes of parents admonishing kids that “No, you’re not holding it right” or “Here, let me show you again”. While a few of these comments might have been welcome or helpful, it was obvious that a constant stream of them were creating frustration for parents and kids alike.

There are two courses at Disney World and a Google search for miniature golf in Orlando finds 12 more, so there’s a decent shot you might give it a try on your family’s Florida vacation. Here are my best tips for keeping it fun so that they’ll want to come back and play again next time.

Different courses can be very different experiences, and not just in the design of the holes. It’s not essential, but a quick review of reviews for a course you plan to visit can help you to avoid the most crowded times, or know to make an evening visit in the summer if the course has little shade. If many reviews say that greens are not well maintained or it’s hard to keep the balls on the course, then it might not be the best choice for kids. Whether or not you researched in advance, don’t be afraid to leave some holes unplayed if you find that the course just isn’t fun for you.

Let’s start a rules discussion with the no-fun “no” stuff.  Later I’m going to tell you how to modify or dispense with standard rules that aren’t working out, but there are some places where it’s worth standing your ground. 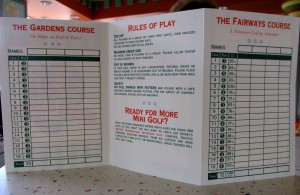 No “just one more try”. Most courses have a stroke limit per hole, usually five or six strokes. This keeps your game from turning into a marathon experience that your kids will get bored with in the middle, but it’s also to keep other players from having to wait … and wait … and wait … as they follow you through the course.

No swinging the putter. I don’t know if it’s human nature, but it seems like kids who are holding a putter that they aren’t using on a ball right that minute have a tendency to swing it around. Unfortunately, that means a lot of unintended whacks of the putter on the greens, the walls, and the fences, not to mention other players’ kneecaps.  To prevent damage to putters and players, our family rule was that the head of the putter couldn’t be higher than your knees — and multiple infractions could result in having to sit out the next hole.

Many courses have a posted sign, or perhaps an area on the back of the scorecard, listing The Rules.  Does that mean that these are the rules you and your family need to play by? I’ll borrow from our famous Saturday Six blogger: Nay, Nay. Mini golf is one of my family’s core vacation activities, and here are a variety of “extra” rules we’ve used over the years to bridge the gap between our desire to play and our kids’ readiness to play grownup-style with us.

1. Kids are allowed to use their hands, including picking up the ball and putting it in the cup. I already talked about the six-stroke limit; kids who are routinely using all six strokes and still can’t get it in can get pretty frustrated. This frustration usually doesn’t come from the high score, but from having failed to “finish” by getting it in the cup.  Putting the ball in the hole with their hands after six strokes is often all that’s needed to keep everyone happy.  It’s not only kids who’ve taken six strokes though; some kids are just “done” with the hole after two or three strokes; they want to put the ball in and move on.  Some kids want to push it in with their hands if it’s close enough, to avoid that painful experience of taking the short putt and watching it totally miss.

2. Kids can hit their balls again before they stop rolling. I don’t know why some kids are so enamored of playing polo-style. As long as they’re willing to agree that every time they hit the ball it counts towards their six-stroke limit, is it really worth arguing about? For kids who don’t default to this mode, it can still help them reach the green on holes where it’s up a steep hill or the ball has a tendency to roll back to the tee.

3. Kids can piggyback an adult’s tee shot. This is another great option for kids who have trouble getting to the green. A grownup shoots to the green, and the kid places their ball near to where the shot ended up.  There are some fun opportunities for creative team play here if you’ve got equal numbers of kids and adults.

4. Kids (and grownups) can play the entire hole straight through. Standard play is that everyone hits to the green, and then everyone putts. We’ve often found that it’s faster for everyone to just play through the entire hole one at a time.  A bonus is that if the course isn’t crowded, part of the group can advance to the next hole and everyone does less waiting.  If there are two adults we like to have one go first and the other go last. 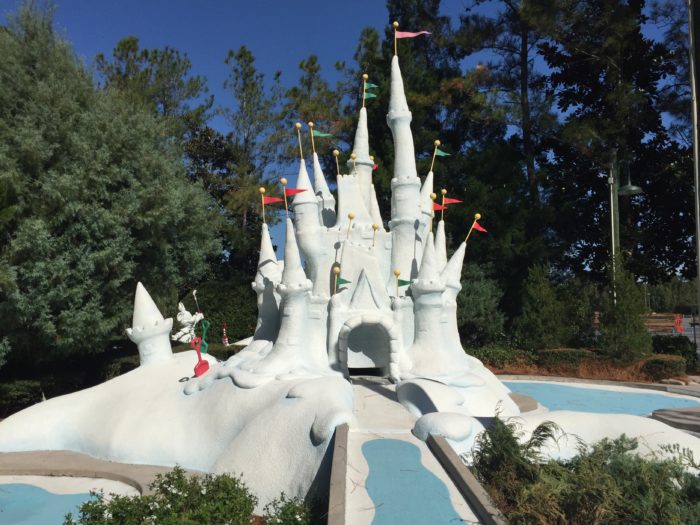 5. Kids get a re-do, one per hole. Sometimes it’s all about where the ball ended up. It was two inches from the hole, it looked like an easy putt, and somehow things went horribly awry. Now it’s two feet away and in the water hazard to boot.  Just let them put it back and try again.  As kids get older and more capable you can change this to a fixed number of shots for the whole course instead of one per hole.

6. Kids can tell you their score. No, I’m not talking about whether they can open their mouths and pronounce the word “four”, I mean that they can literally tell you what to write on the scorecard. I mean really, they hit the ball a second time while it was still rolling towards the green, took a free re-do after it ended up on the wrong side of the rock, and eventually just tapped it in with their foot.  Winning and losing are already kind of meaningless because they skipped hole 5 after whacking the bench at hole 4 twice with their putter. If they want to say they got a two on this hole, you’re really going to argue with them about the number? Many kids are happy to dispense with scoring completely, but for those who want to be like the grownups and write down their scores, just let them make it up.

We used all of the above rules when my kids were younger, but now that they’re teenagers they play like regular adults. So how to get from here to there?  An obvious approach is to put in an age-based cutoff, but we took a different tactic: bribery.  Our rule was: if you could beat Mom you got an extra topping on your post-game ice cream — but you had to play straight to win it, using (mostly) the same rules as Mom. We did still give them a handicap to make it fair shakes, but this strategy gave them control over when they felt up to the challenge of playing like a grownup.

Have you played miniature golf with kids? How do you keep it fun?  Let us know in the comments!

4 thoughts on “Miniature Golf With Kids: Six Tips for Keeping it Fun”