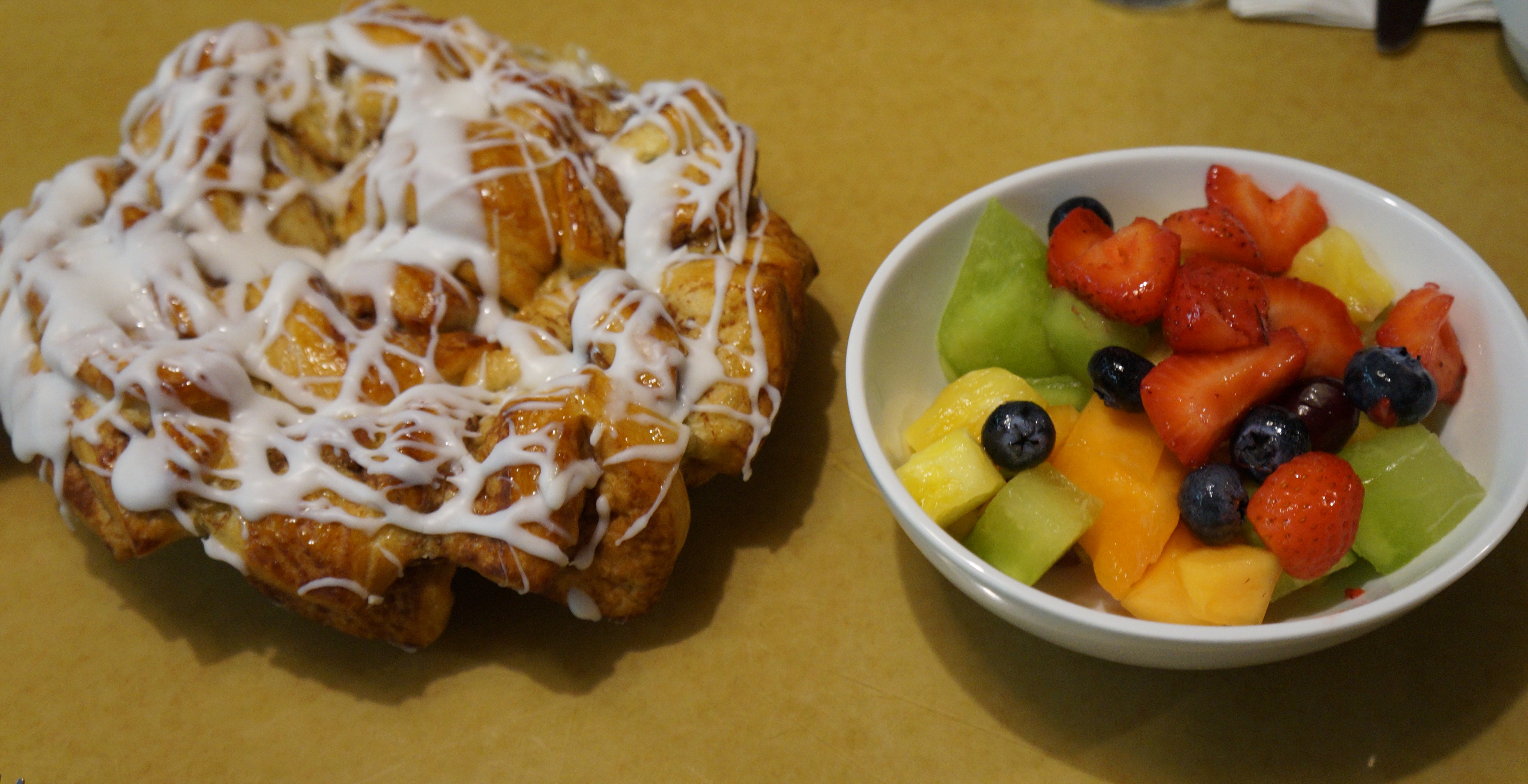 I may have mentioned this before when covering breakfast at Ravello, brunch at Chef Mickey’s, or breakfast at Downtown Disney/Disney Springs, but my family are huge fans of breakfast. My daughter’s favorite pavilion in Epcot is The Land as well. So when you put these two together, with the return of breakfast after a lengthy hiatus from The Garden Grill in The Land pavilion, I knew we had to stop by.

Advance dining reservations start as early as 8 AM, and so you have some amazing opportunities for photos with Spaceship Earth on the way in with no crowds, and by arriving early and being seated right at 8 AM, we were able to finish our meal and arrive downstairs at Soarin’ about five minutes before the morning crowds.

Once we got seated in the restaurant, we looked over the menu. Like other meals at Garden Grill, breakfast is served family style and is all you can eat. Included in the price is coffee, tea, milk, and juices, included the world-famous POG juice (passion fruit, orange, guava). You can also order a cocktail, such as a Bloody Mary or an orange or raspberry mimosa for an additional cost. Once we had placed our drink orders, the first round of food came out: Chip’s Sticky Bun Bake and a bowl of fresh fruit. If I had to describe the sticky bun bake, it was about as much as you’d get in a whole tube of refrigerator cinnamon roll dough, chopped up and pressed into a skillet that was baked in the oven and covered with icing. It was certainly more than our party of three (two adults and one child) could even make a dent in. The fruit included fresh pineapple, melons, berries, and grapes.

As we started slowing down on this “appetizer”, the main course arrived. The main tray included ham, bacon (and thick bacon, not the typical thin strips you often see at Disney buffets), Mickey waffles, “potato barrels” (tater tots), and scrambled eggs. Another dish came out with biscuits and sausage gravy. A third tray came out with three condiments–a red salsa, a green salsa, and an apple-peach chutney. We’re not fans of either ketchup or syrup, and so we didn’t take the dish of ketchup for our table and promptly forgot about the container of syrup on the main platter. (But more about that in a minute…)

With the exception of the eggs, which are your typical Disney institutional-grade egg mix and not a favorite of mine, everything else was wonderful, freshly prepared, and delicious. The sausage gravy was hearty but not greasy. The biscuits were tender and not dried out. The ham and bacon were wonderful. As always, Mickey waffles were perfection on a plate. And how can you not love tater tots for breakfast?

I don’t tend to put salsa on eggs, so I wasn’t entirely sure what to do with the condiment tray. In the end, I used the red and green salsas for dipping sauces for the hash browns. Neither salsa was overly spicy, and the flavor of the red salsa was fresh and delightful. The server made sure to mention that it came from produce grown at The Land, which is always a nice touch.

The apple-peach chutney was heavily spiced. If you’ve ever had those red spiced apples that get served around the holidays, it had a flavor similar to that. I put some on my waffle, because I couldn’t think of what else to do with it. If it disappears from the menu, I’m not sure it will be missed by many, unless someone would prefer to use that on biscuits instead of the sausage gravy.

Remember that syrup I mentioned earlier? Once my second cup of caffeinated beverage started kicking in, I remembered that the menu said it was served with “warm chocolate-hazelnut sauce”. I poured a little on the waffle, and sure enough–melted Nutella bliss! I absolutely adore the Nutella waffle from Sleepy Hollow, and now I could make my own right at the table! When the manager came around to see how we had enjoyed our meal for this new offering, he mentioned that when the executives had tried the menu earlier in the week, they were a bit unsure how guests would react to waffles with Nutella syrup instead of maple syrup. I can’t speak for everyone, but at least for my family, this was really an offering that took breakfast up a notch. For any higher-ups at Epcot reading this, please keep the Nutella syrup! I don’t think anyone in the restaurant at all was missing maple syrup.

During the meal, Mickey, Pluto, Chip, and Dale came around to joke with our table, and the interaction with them was marvelous. Pluto snuck up on my daughter a few times, much to her delight. Mickey loved the picture my daughter drew for him. Chip and Dale had fun “arguing” with us about whether Mickey waffles should be replaced with a Chip waffle or a Dale waffle. (Final answer — they’d be okay with a Dale waffle with chocolate “Chip”s.) In between the character visits, you also have the fun of watching the Living with the Land boat ride down below the restaurant.

The cost of the meal is $29.99 for adults, and $17.99 for ages 9 and under. Tables in Wonderland is accepted, and of course you need admission to Epcot to dine here.

Overall, the breakfast service went incredibly well. Our server, Holly, was wonderful, and management really was interested in any feedback we might have. I personally enjoy the family-style format much better than a buffet, and it was a quieter and more relaxed meal than most Disney character breakfasts. I do believe that this will become a popular option for families, especially when you compare the price to that for Akershus and the presence of characters other than princesses.

Generally, opening days are tricky for restaurants. They are testing a new menu, working out kinks in service, and there’s lots of opening day jitters. For the first day of breakfast service in many, many years at Garden Grill, they absolutely hit it out of the park in terms of food, service, and experience. If you’re looking for a breakfast meal to fill out your dining experiences, I highly recommend this one.