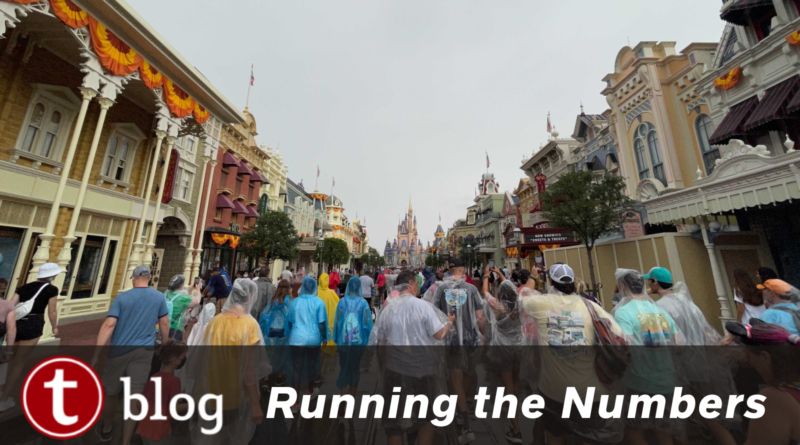 A lot has changed at Walt Disney World in the past few months. Crowds have picked up; resorts and restaurants have reopened. And a lot of visitors from July commented that wait times easily felt like they were back to “normal” – or maybe worse than normal, since they can’t FastPass their way around the bigger waits.

I’m a numbers person, so I want to make sure things don’t just “feel” like they’re back to normal. It could be that we just got used to the nice, uncrowded parks full of walk-on options in the months following reopening. I know my family was spoiled during our September 2020 trip – we completed 26 attractions (and a table service meal and a quick service meal) in the Magic Kingdom in an 8 hour day with two toddlers in tow. We went again in January of 2021 and things felt so much more crowded. I went back and pulled my wait times from that trip … and they averaged 11.5 minutes for all of our park days combined. Definitely not an average I’d complain about.

So today let’s do the same sort of analysis overall and not just with my wait times. Yes, the parks look and feel more crowded. But are the wait times on par with what we were seeing before the parks closed last spring?

This week is all about tracking wait times over the past couple of years. I want to get a good view of averages pre-pandemic, as well as trends after reopening. There are only three kinds of wait times that I care about for comparing apples to apples:

I went and pulled all of these data points from January 1st, 2019 through July 31st, 2021 and aggregated the average for each park for each month. This won’t give us incredibly detailed data since we’re not digging down to a ride-by-ride analysis. But it’s enough to look at general trends.

Let’s start with the biggie. If you haven’t been to Magic Kingdom recently, you’ve probably at least seen the pictures. Especially at rope drop, there are WALLS of people. Lots of humans. And a large number of people have commented that wait times also feel like they’re back to “normal”.  Let’s compare wait times from the year before the pandemic to see if that’s true.

EPCOT is increasingly a tale of two parks – not pre-pandemic and post-reopening necessarily, but rather festival and non-festival. Although by my most recent calculations, there are only about 30 days this calendar year that aren’t covered by a festival. So what do wait times look like at the Experimental Prototype Festival of Tomorrow?

Hollywood Studios is the park where wait times seem to most heavily depend on attraction downtime. It’s also the park that had one of its major attractions debut right before the pandemic shut-down. What did that do to our trends and comparison?

Animal Kingdom has several attractions (like walking trails) that don’t require any wait and help with absorbing crowds. But it also has the one attraction with the highest average standby wait of any attraction at WDW – thanks, Flight of Passage. How does that all average out in times waits?

Have you visited WDW recently and experienced wait times that you weren’t expecting? Are you surprised by any of the trends or comparisons? Let us know in the comments!