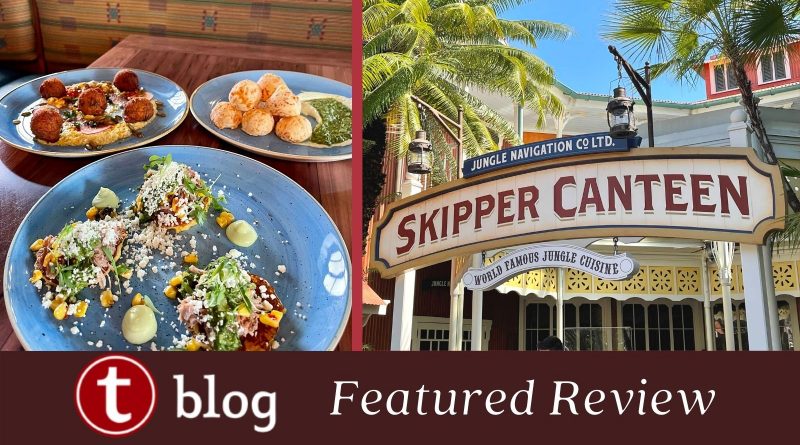 Magic Kingdom is not known for its food. Sure, there are certain iconic treats like a turkey leg, hand dipped corn dog, or Dole Whip soft serve, but when it comes to table service dining there aren’t many crave-able options. There is one location, however, that I get a craving for: Jungle Navigation Co. LTD Skipper Canteen. It is one of the best themed dining experiences in Magic Kingdom, and the menu is unique and adventurous.

Let’s set sail with Chrissy on our team who explored the wilds of this Adventureland treasure earlier this month.

Before we dive into Chrissy’s thoughts on each dish, I have to point out that the Plant-based options at Skipper Canteen offer some of the best variety of any dining location at Magic Kingdom. There’s not much creativity when it comes to Plant-based dining at Magic Kingdom, but Skipper Canteen offers a good variety, and emphasis on vegetables rather than “fake meat.”

First, let’s let you in on a little secret. Skipper Canteen has a not-so-secret menu that is presented to each guest. The highlight of this little menu is the Pao de Queijo. It was cheesy and chewy, and a comforting way to get the meal underway.

A hearty way to start the adventure is with Orinoco Ida’s Cachapas. There was a little bit of spice, according to Chrissy, but not overwhelming. And it was a generous portion that could serve 2-3 adults as a nice appetizer.

One of my favorite plant-based foods is falafel. It’s usually so flavorful no matter where I order it. Chrissy reports that the Falls Family Falafel had a nice crunchy exterior, with a creamy, fluffy inside with great flavor and balance of spice. For $10.00 you are served five falafel on a bed of edamame hummus with toasted pumpkin seeds. It’s a good deal.

A highlight of the menu is the Perkins Thai Noodles entree. It is plant-based, but Chrissy’s party added sliced steak for $8.00 more. The portion, especially with the added steak, was overly generous and would satisfy two adults. This is a spicy dish, very spicy especially from Disney’s standards. With fresh, crisp stir-fried vegetables and oodles of noodles this is a must-do as long as you like heat.

If you’re anti-heat and love the sweeter side of life, then the “Tastes like Chicken” Because it is! just might float your boat. There was no heat in this dish; the glaze is nice and sweet.

The Kungaloosh is the way to go. Chocolate? Yes. Coffee? Yes. Caramelized bananas? Sold! None of the flavors overpower each other and the Cashew-Caramel Ice Cream that tops it off elevates the entire plate.

We have ratings and rankings for every Walt Disney World restaurant on our site and Lines app. Our subscribers give Jungle Navigation Co. LTD Skipper Canteen a 89% thumbs up rating, and it is ranked #29 out of 105 table service restaurants.

If you’re a fan of the Jungle Cruise, the sorely missed Adventurer’s Club, or just Disney’s adventure themes in general, the dining room of Skipper Canteen is going to charm you. There is one large room with two smaller rooms to the side. There is no outdoor seating, but the main dining room is very airy. You must take a look around and examine the details. Even if you’re not intimately familiar with Disney’s adventure themed attractions, you’re sure to get tickle out of the décor.

Overall, if you prefer familiar cooking, with less exotic flavors, you may not enjoy Skipper Canteen. It does a great job of presenting Asian-influenced dishes as well as a few Mediterranean and African inspired options. And so, if these types of flavors appeal to you, then set a course for Skipper Canteen.

Have you ever dined at Skipper Canteen? How was your experience? Let us know in the comments!

4 thoughts on “REVIEW – Jungle Navigation Co. LTD Skipper Canteen Should Not Be Skipped at Magic Kingdom”