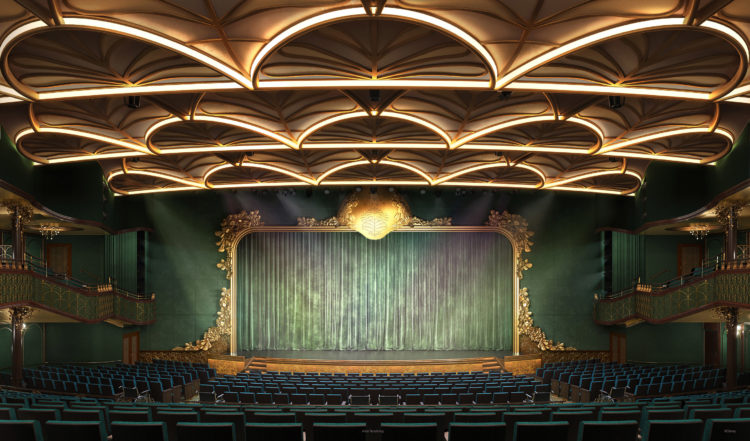 When the Disney Wish officially sets sail in the summer of 2022, entertainment will be a hallmark of the cruise ship. Disney is known for their fantastical worlds and they will tell their stories in new innovative venues, using revolutionary storytelling techniques in not only original productions, but also guest-favorite shows that the entire family will enjoy.

The Disney Cruise Line ship’s atrium, the Grand Hall will occasionally evolve from an elegant atrium into an environmental theater courtesy of the first-ever atrium stage on board a Disney ship. (Actually, as someone who has sailed on Disney Cruise Line knows, this is a genius idea, because often the outdoor stage shows can get cancelled, so having a space indoors that they can easily pivot to is awesome.) Dedicated shows and interactive entertainment will come to life all around guests in this magical new venue.

Luna will be an event gathering place that will transition from a daytime setting for family fun into an elegant evening venue for adult-exclusive entertainment. (This sounds to me like the club area of the other ships.) Luna will offer a variety of live shows and interactive programming throughout the day and night.

This space will feature design inspired by the Disney and Pixar short “La Luna.” It will be outfitted with a two-story LED screen wall, stylish stage, full-service bar and spacious seating. There will be an energetic atmosphere on the lower level and the balcony will offer a more intimate setting for enjoying festivities in small groups, with secluded seating in semi-private booths.

This will be a completely new area for active family play. Hero Zone is a futuristic sports arena where physical activity will blend with imagination, alternating between an elaborate family obstacle course and a free-play sports hub. Families will take on action-packed physical challenges themed to some of Disney’s most incredible heroes during over-the-top, game show-style competitions. Balcony viewing space will be available for Guests to watch and cheer.

One of the best parts of sailing on a Disney Cruise Line ship are the incredible Broadway style performances that occur in the Walt Disney Theatre. The Disney Wish’s Walt Disney Theatre will be an elegant 1,274-seat show palace that spans three decks with orchestra and balcony seating. There will also be changes to the theatre’s design as, the Wish’s version will evoke an enchanted forest, inspired by scenes from Fantasia. The theater will be equipped with state-of the-art technology, including projection mapping capabilities and a Dolby Atmos 3D audio system — a first for the cruise industry — to create a transformative theatrical experience rivaling anything on land or at sea.

The Disney Wish will premiere two brand-new, original stage shows and more details will be announced at a later date. But one show will be revamped and will appear on the Disney Wish and that will be “Disney’s Aladdin – A Musical Spectacular.” This is a guest-favorite and is a musical comedy that is based on the classic animated film, Aladdin. Iconic scenes and songs from the movie will be re-created on stage, including a lively rendition of “Friend Like Me” and a breathtaking performance of “A Whole New World” atop a flying magic carpet. Grammy Award-winning composer Alan Menken created an original song for Disney Cruise Line called “To Be Free,” which is a solo performance for Jasmine.

The Disney Wish will elevate the onboard cinematic experience with two intimate movie theaters that are steeped in Disney storytelling. These boutique cinemas will be the first in the cruise industry to offer Dolby Atmos 3D audio technology. At 84 and 86 seats respectively, the Wonderland and Never Land cinemas will offer Guests more options than ever before to watch classic and first-run films from Disney, Pixar, Marvel, Lucasfilm and more.

Wonderland Cinema is of course, inspired by the world of Alice in Wonderland. The woodland motif will continue into the ceiling to create the feeling that guests are peering up through the enchanted tree canopy above.

In the Never Land Cinema, which is inspired by Peter Pan’s flight from London to Never Land, Guests will revisit iconic scenes such as Skull Rock and Mermaid Lagoon, as the venue’s night-sky color palette will light up with the flutter of Tinker Bell’s wings.

Outdoor Entertainment on the Upper Deck

Up on deck, the family pool district of the Disney Wish will double as an entertainment venue. With a poolside stage and a jumbo LED screen, Guests will enjoy a variety of entertainment ranging from movies and live sporting events to brand-new deck parties and nighttime fireworks spectaculars developed exclusively for this ship.

More information on these new experiences will be announced at a later date.

Want to learn more about what else will be taking place on the top decks? Take a look at our article here.