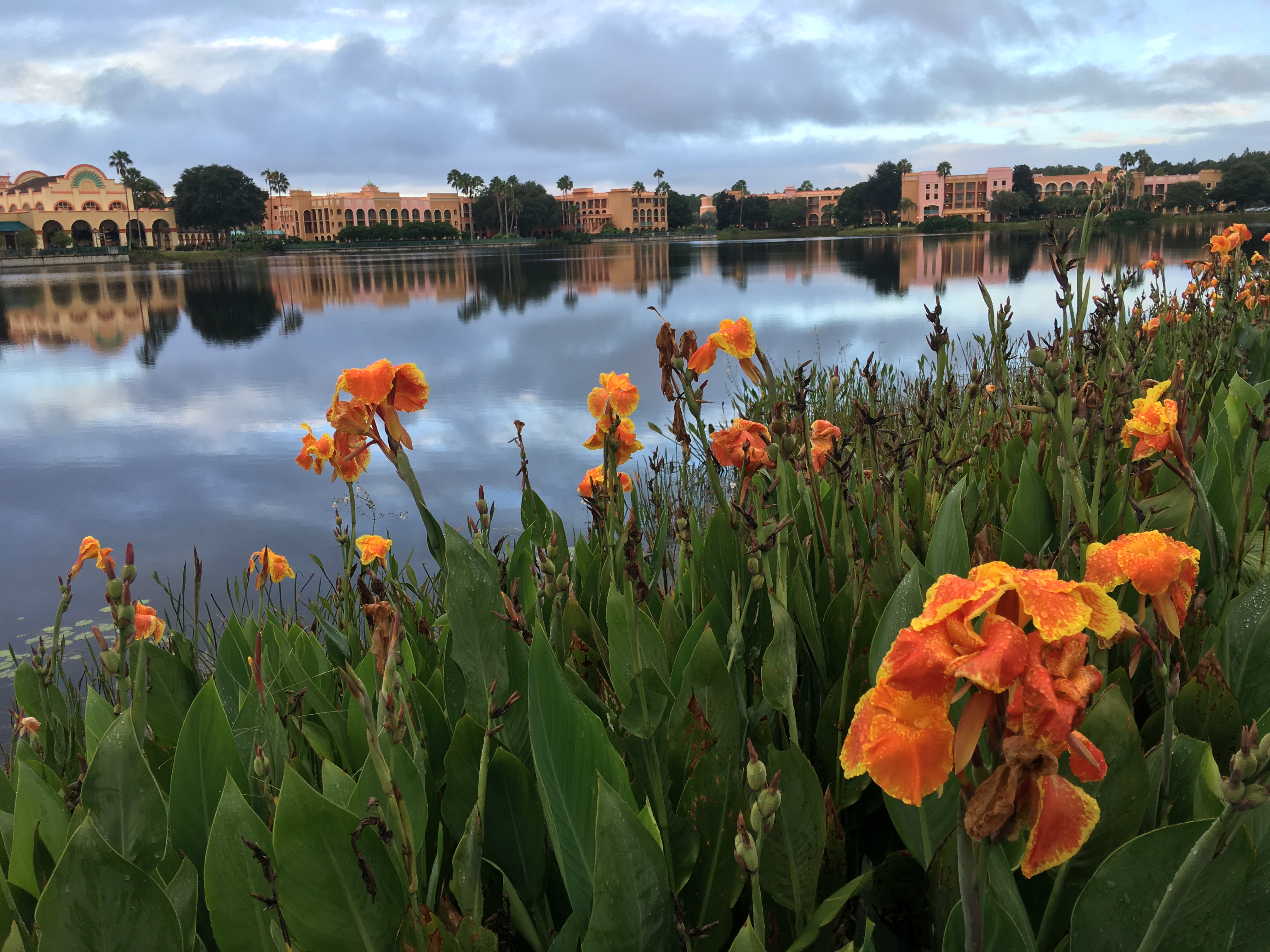 This week’s SATURDAY SIX takes a look at Six Reasons We LOVE Disney’s Coronado Springs Resort. With 26 on-site resorts at Walt Disney World, there is a wide variety of choices for families coming down. We’ve covered many here on the SATURDAY SIX including Value Resorts (Art of Animation and Pop Century), Moderates (Port Orleans French Quarter and Caribbean Beach), and Deluxe (Contemporary and Animal Kingdom Lodge). We also can’t forget the Disney Vacation Club resorts such as Old Key West. Today we are going to take a look at one of WDW’s most underrated resorts, Disney’s Coronado Springs.

There are several reasons Coronado Springs doesn’t get the love and attention the other Disney resorts do. The biggest factor is that caters heavily towards the business convention crowd as opposed to primarily vacationing families. Ironically, this feature actually provides some of the biggest benefits for families, but we’ll get to that later. Because Coronado Springs is relatively off the beaten path at WDW (it sits close to Blizzard Beach, Winter Summerland mini-golf, but little else,) it’s not a place you generally run into while enjoying something else at The World. We’re here to let you know that you should go out of your way to check out Coronado Springs, and we have our six best reasons at the ready. So sit back, remember to practice your piñata swings, and let’s begin our list with…

How can you not love a gift shop named after, Panchito Pistoles, one of the Three Caballeros? Inside the store there are several great Three Caballeros paintings on the walls as well. While the actual offerings for Coronado Springs related merchandise are rather generic (the same style t-shirts, keychains, magnets, and cups that you can get at almost any WDW hotel, and they look exactly the same from a distance), where Panchito’s shines is the amount of merchandise it has dedicated to Mexico and the American Southwest culture. We’ve been lucky to take several trips to Mexico, and Panchito’s has many items for sale that we see there; including hand made blankets, wooden animals, and the ubiquitous Day of the Dead skulls. The store is rather large, so you’ll find many Disney t-shirts, plush dolls, pins, and more along with a small grocery area for snacks and cold drinks.

Unlike its Moderate counterparts, Coronado Springs is loaded with great places to eat and get adult beverages. The Pepper Market rivals the best food court we’ve ever been to at Disney. There are sections for pizza and pasta, burgers and sandwiches, but also dedicated areas to Mexican specialties. On one night during our stay, a convention meeting had just let out and the Pepper Market was swamped. However the crews at each station were all at the top of their game, getting people through fast despite almost all items being made to order. One of the best values was the Market Nachos: a gigantic order of nachos with whatever toppings you wanted for $10.59. Big thumbs up for the tacos as well, but two of the side dishes really made our day. The seasoned potato wedges that come with burgers are some of the best on property, and the dessert area includes churros. While the Disney parks charge $1 extra if you want dipping sauce, Pepper Market offers unlimited amounts of chocolate, white chocolate, and – our favorite – caramel sauce.

Pepper Market sits directly in-between the Maya Grill and Rix Lounge. Maya Grill is the resort’s full service restaurant and – like the Pepper Market – it is run by Palmas Services, who also run the venues at EPCOT’s Mexico Pavilion (including La Cava del Tequila and La Hacienda de San Angel.) The theme of the restaurant is an ancient Mayan area, complete with large pillars simulating fire. The menu can be a bit pricey, but you have to imagine many of the guests dining here are on expense accounts. While waiting for a table, we were able to see a passionate conversation by a guest on the last day of their Disney Dining Plan trying to verify they could get the $33.99 New York Strip at Maya Grill rather than “waste it” at the Pepper Market. We loved the house guacamole as an appetizer, and got the Tacos Durango along with a vegetable fajita for the main meal. Both were very good, but what stole the show was the margarita flight for drinks and the great “dessert shots” they offer for a dessert.

When we polled readers for the Best Bars and Lounges at Walt Disney World, Rix Lounge scored extremely high for bloggers and locals, but less so for the average guest. Rix has an upscale feel and “club vibe” (there’s even a VIP section that can be roped off) but we’ve never had a problem stopping by for drinks in casual wear. Depending on conventions, the bar generally ranges from very quiet to completely packed. One of the drinks we tried was the Pomegranate Pop, which features the “Pop-Rocks” from our childhood on the rim. Rix has a decent sized food menu, with both appetizers and entrees. We can definitely recommend the house made BBQ chips as they were much better than expected for a bar snack.

The water side Laguna Bar features  a whole bunch of tables to enjoy your drinks at along with several couches. With the wonderful background music playing as you drink, this is one of the most pleasant outdoor resort bar experiences at any Disney resort. Why? Because unlike Mardi Grogs at Port Orleans: French Quarter or The Drop Off at Art of Animation, you’re not anywhere near a pool and can enjoy your cocktail and conversation without a bunch of people running around.

The overall theme of Coronado Springs takes its inspiration from northern Mexico and the American Southwest. This can be seen throughout the entire resort, from the Spanish influence architecture to the beautiful artwork, and all of it circles the serene 22-acre Lago Dorado (“Lake Dorado” for the laymen.) In fact, water plays a major feature throughout the resort outside of the stunning Lost City of Cibola pool along with the three other fantastic quiet pools. There are large fountains throughout the resort, including  the gorgeous La Fuente de Las Palomas (“Fountain of the Doves”) as you step into the lobby. Above that fountain, inside of a huge dome, is a stunning hand painted mural featuring doves and clouds. The entire area, including the nearby registration lobby, is just gorgeous.

The guest rooms at Coronado Springs are located in three villages. The Cabanas, Casitas, and Ranchos. We stayed in the Cabanas, which are two stories tall, pastel colored, and themed to small villages by the Mexican coast. Next to the main building and convention center are the three and four-story Casitas buildings. Generally used by convention guests, this area is themed to the more urban areas of the American Southwest and is also where you’ll find the gym and spa services. What really stands out though, is the Ranchos section and its two to three story pueblos. The Ranchos almost seem like a completely different resort, in that the area is so unlike anything else at Disney. You are totally pulled into the “story” here with giant cactuses and almost desert-like feel. The buildings themselves have stonework that look like you’re approaching a large cattle ranch. I love walking around all the Moderates at Disney and seeing the different types of buildings in Port Orleans and Caribbean Beach, but the Ranchos area was the first place to make me stop and go “wow.”

# 1 – The Vegetation Across Property

Taking a walk across property at Coronado Springs is a pure treat if you like plants and foliage because there are so many different types of flowers, trees, and other vegetation to take in. From cactus, to trees with Spanish moss, to agave, to various types of palm trees, and too many more to describe, a walk through the nature of Coronado Springs is one of the most enjoyable things to do at the resort. The landscape is lush and perfectly taken care of, so everywhere you go has a lovely view.

As we said, because Coronado Springs caters to business people, there are some amenities that many of us aren’t used to in standard Disney hotel rooms (although they should be.) The amount of outlets in the room will keep an entire family’s pile of smart phones, iPads, and Game Boys charged up throughout the vacation without anyone fighting over “the juice.” The coffee machine had actual coffee mugs instead of paper cups. Not only was a room service menu available, but the options were plentiful. There are two huge wooden slider doors between the vanity and the main bedroom that I think was more substantial than the actual gates at Helm’s Deep (and they said I couldn’t tie in Lord of the Rings to Coronado Springs!) Would love to see some of the concepts in these rooms applied to many other places across property as they were greatly appreciated. The hidden gem of Coronado Springs is the bathrooms. There is a high powered fan that you can set via timer. You can adjust the water pressure from Medium, to High, to Pressure Wash Your House and we loved it. Now this was a shower! But then, the pièce de résistance: a Coronado Springs sticker that starts off a new roll of toilet paper. As a fan of themed butter and napkins, this was so beautiful I think I started crying its magnificence.

So there you have it: Six Reasons We LOVE Disney’s Coronado Springs Resort. See you next weekend for the latest installment of the SATURDAY SIX, where we’ll look at something fun from the world of Disney and Universal. If you enjoyed yourself, be sure to check out The Magic, The Memories, and Merch! articles (which we just celebrated our THREE YEAR ANNIVERSARY), or, for your listening pleasure, check out the E-Ticket Report podcast. You can also follow Your Humble Author on Twitter (@derekburgan)

Special Thanks to crack staff photographer Brandon Glover and blogger to the stars Megan Stump for their invaluable assistance with this article. A special note of un-thanks to Tim Grassey of WDW ThemeParks.com for once again never failing to disappoint coming up with the most unusable suggestions ever thought by the human mind. Be sure to also check out Brandon on The Park Blogger podcast with co-host Aengus Mackenzie along with Meg’s Yeti To Be Named Disney Podcast.