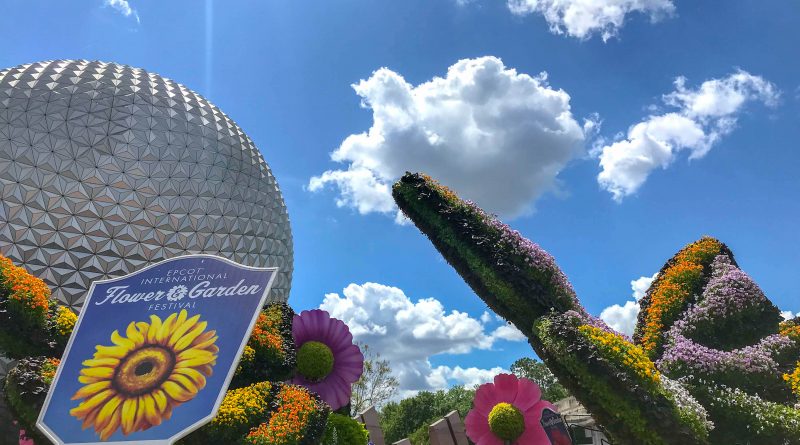 This week’s SATURDAY SIX takes a look at Epcot’s 2019 Flower & Garden Festival. While there are a lot of annual events in Orlando that are near and dear to us for varying reasons (the wild party atmosphere of Mardi Gras, the scares of Halloween Horror Nights, the awesomeness of Festival of the Arts and the food and, uh, wine of Epcot’s Food & Wine Festival), one event stands out from all the rest because it stresses the fact that we should – literally – stop and smell the roses.

That’s right, the Epcot International Flower & Garden Festival is back, and this year just may be the best yet. What really makes Flower & Garden special is how amazing it is just to walk around Epcot and take it all in. Most events in theme parks are limited in the size and scope of their overall effect on the individual park, but you can see the beauty and tranquility of Flower & Garden everywhere that you go.

This week’s SAT 6 is going to look at six of our favorite parts of this year’s festival, and we’re going to start off with…

As we said in our recent look at the Hard Rock Hotel at Universal Orlando, there’s just something special about a butterfly garden. Butterflies are beautiful, calming, and have one of the most unique life cycles of any insect. The Goodness Garden Butterfly House is located near the Imagination Pavilion and is filled with butterflies! Not only does the Goodness Garden have tons of butterflies fluttering around, inside there is a lot of interesting facts along with interactive features for the kiddos.

Disney brought their A-game with Flower & Garden merchandise this year with a whole bunch of cute options featuring Mickey, Minnie, and – of course – Figment.

As frequent visitors of the Disney Outlet Stores in Orlando, we made mental notes of many items we plan to pick up once they (almost invariably) get discounted when the Festival is over.

We’ll be getting to food and drink later, but one of the most popular returning items at Flower & Garden is the Frozen Violet Lemonade. This year there is a whole bunch of merchandise based around the festival’s iconic drink.

In the festival center, there was even a large Frozen Violet Lemonade photo op.

Because of the amount of outdoor food kitchens, it is generally recommended to load up one of these handy gift cards that you can walk around with on your wrist.

Fun “stress ball” themed to a lemon. There is no truth to the rumor than Len Testa has gone through three of these after reading my monthly expense reports from Voodoo Doughnuts.

Throughout the Flower & Garden Festival, Disney was releasing various magnets for Annual Passholders. 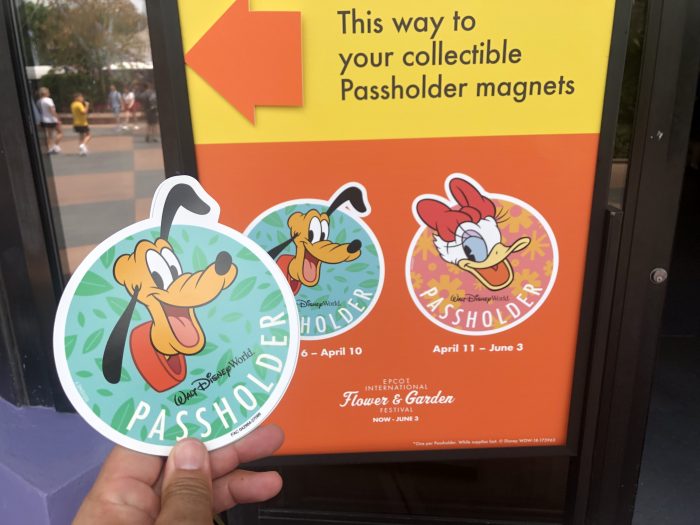 There is nothing like walking around Epcot during Flower & Garden because the sheer amount of flowers Disney displays during the event is almost overwhelming. Both Future World and World Showcase are bursting with flower displays and flower gardens.  The park is never more gorgeous to be in and the smells are wonderful!

The Shakespeare Garden in the UK Pavilion shows just how much William Shakespeare referenced flowers in his various writings.

Besides the seemingly millions of flowers, Epcot is also loaded up with a ton of other stuff to check out while enjoying the park, including several gardens growing fruits and vegetables.

The Florida Fresh kiosk is set up next to a walk through garden which has many fruits and vegetables growing, including sweet potatoes, blueberries, and strawberries.

Spike’s Pollen-Nation Exploration map is available for $6.99. It includes a set of stickers which you use on the map when you find various flower types that Spike has been “hidden” in. Once the map is completed, you can redeem it for a set of patches.

The China Pavilion had the Chinese Zodiac Calendar animals represented.

Disney has Purple Martin habitats at several of its resorts (including Saratoga Springs). Purple Martins are completely dependent on man-made housing in Florida.

Every year, Earth Day takes place during Flower & Garden and there is generally a display set up reminding guests about our impact on the environment. This penguin sculpture was made by washedashore.org, a non-profit organization who uses discarded items to create works of art.

The Outdoor Kitchens made their debut at 2013’s Flower & Garden and bring the Food & Wine dynamic to the festival. What they generally don’t bring with them are the outrageously long lines often found at Food & Wine, which allows you to sample various food and drinks throughout World Showcase with very little wait. The Outdoor Kitchens are also very vegetarian and vegan friendly, something that isn’t often said about Epcot’s fall classic.

The big hit this year is the Orange Bird Sipper found at the Citrus Blossom kitchen. The drink served inside was an orange cream slush – which was okay – but the actual Orange Bird sipper itself is one of our favorite Disney souvenir cups to date!

The Frozen Violet Lemonade is available at the Pineapple Promenade kitchen. For first timers at Flower & Garden, not getting one of these would be like not getting a Dole Whip at the Magic Kingdom or a Butterbeer in the Wizarding World.

As we often travel with a vegan to the theme parks, one thing we have noticed is how much better both Disney and Universal are getting with having plant-based options for vegans. This year’s Flower & Garden brought a special treat, as the Trowel and Trellis kitchen was sponsored by Impossible foods. The Impossible burger is hands-down the best “veggie” burger we have ever had, and is now found across Walt Disney World, Universal Orlando, and even SeaWorld. At the Trowel and Trellis kitchen there was a Farmhouse Meatball. This was served on lentil bread, and included spinach, marinated vegetables, and a creamy herb dressing. We absolutely LOVED IT and went back for seconds.

The Grilled Street Corn on the Cob was a huge hit with me, but the generously applied “savory garlic spread” was a little too much garlic for our vegan diner.

The Chocolate Pudding Terrarium is one of those items that makes Flower & Garden special. Besides being vegan, this is a dessert that looks almost too good to eat. The presentation is just fantastic.

Pulled pork slider at The Smokehouse is always a hit.

Flower & Garden is known for its world class topiaries and each year Disney ups their game. Found throughout Future World and World Showcase, these topiaries are a marvel of Disney landscaping.

For those who can’t wait for this summer’s Toy Story 4 (and the film’s reintroduction of Bo Peep,) there is a small playground sponsored by the movie in Future World. Outside the playground are some great topiaries featuring Buzz Lightyear, Sheriff Woody, and Bo Peep herself.

But you just gotta love the sheep.

Brilliant touch with a monkey (from a barrel full of monkeys) hanging out in a tree.

So there you have it: Six Reasons We Love Epcot’s FLOWER & GARDEN FESTIVAL! See you next weekend for the latest installment of the SATURDAY SIX, where we’ll look at something fun from the world of Disney and Universal. If you enjoyed yourself, be sure to check out The Magic, The Memories, and Merch! articles, or, for your listening pleasure, check out the E-Ticket Report podcast. You can also follow Your Humble Author on Twitter (@derekburgan).

6 Examples of the “Disney Difference”

Special Thanks to The Elite Brandon Glover, Captain Cruiseline Scott Sanders of the world famous Disney Cruise Line Blog, photo wunderkind Mike Sperduto, the bio-est of all reconstructs @bioreconstruct, Mr. ‘Ohana Tim Grassey, the SAT SIX Fun Squad of Parkscope Joe and Nick, hot shot Michael Carelli, and Hermione Granger’s tutor Megan Stump for their invaluable assistance with this article. The SAT SIX is inspired each week by goofballs Aengus Mackenzie and LitemAndHyde and you Potterheads will  enjoy Meg’s other blog work over at the Central Florida Slug Club. 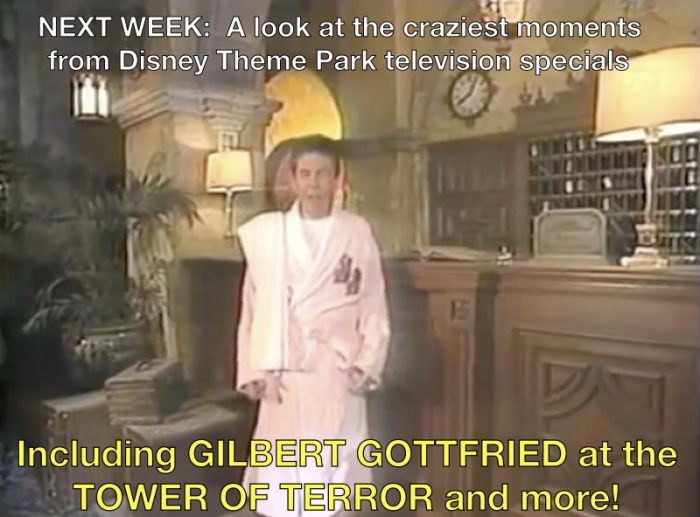