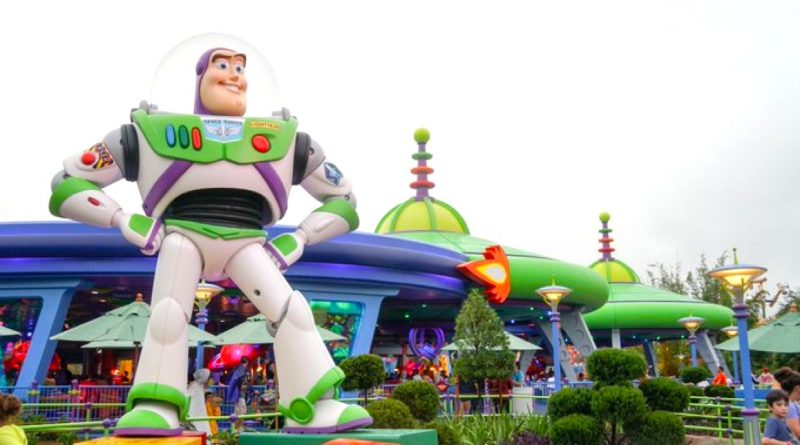 This week’s SATURDAY SIX takes a look at TOY STORY LAND in Disney’s Hollywood Studios! The past few years have been ones of great transition for DHS. Originally created and fast tracked in order to chop the legs out of Disney’s competitor Universal Studios Florida, DHS has now closed all its opening day attractions and is pivoting into a new direction. Instead of having guests immersed into studio-like attractions that showed how movies were made, the park would now be moving in a direction that includes lands and attractions based on popular film and TV franchises. The first phase of the “new and improved” version of DHS opened this past week with the debut of Toy Story Land. A desperately needed addition featuring attractions aimed at the younger set, Toy Story Land also happens to be based around the characters of one of the most beloved animated film series ever made. Today we’re going to take a look at some of our favorite parts of the new land, and let’s kickoff the countdown with…

Let’s get the negatives out of the way. While wonderfully themed, Woody’s Lunchbox is way too small with nowhere near enough seating. On the bright side, the menu follows in the footsteps of Pandora’s Satu’li Canteen and delivers in a major way. Instead of the usual burgers and chicken fingers comes a unique menu filled with items rarely seen at a Disney quick service. The sandwich selection has received major praise across the board, with seemingly everyone loving the Monto Cristo, Grilled Three-Cheese, and BBQ Brisket Melt sandwich options. While french fries are a dime a dozen at Walt Disney World, its not as easy to find tater tots. Woody’s Lunchbox not only features tater tots as a side item – which they bill as “potato barrels” to tie into the barrel of monkeys toy theme – but also offer Totchos as an entree. Totchos are basically nachos with tater tots used as the base instead of tortilla chips. Totchos are a fast rising trend in the restaurant industry and made their Orlando theme park debut last year at Universal’s Toothsome Chocolate Emporium. Woody’s Lunchbox has a strong retro theme throughout, and nowhere is that more evident than the Lunch Box Tarts that are designed to look like classic Pop Tarts. As far as Disney Quick Service goes, you’re not going to find much better food in the entirety of Walt Disney World, but especially at Hollywood Studios.

RELATED: Be sure to check out TouringPlans’ review of Woody’s Lunchbox for an in-depth look at many menu items.

While it has become a running joke in the theme park industry for all rides to end in a gift shop, Toy Story Land doesn’t have a single dedicated gift shop for any of its attractions. It also doesn’t have a large gift shop for the land, like Magic Kingdom’s Big Top Souvenirs in Storybook Circus. Instead you can find two themed kiosks inside Toy Story Land, and several gift shops throughout DHS selling Toy Story Land related items. As a person who has been covering the Disney Outlet Stores and Disney Souvenirs for five years, I can personally attest to the fact that there hasn’t been much great Toy Story merch in the parks.

That is, UNTIL NOW.

Toy Story Land made its debut with a whole bunch of fantastic items. Fans of Disney’s Mickey Ears and headbands are going to love the cute ones themed to Slinky Dog and the Green Aliens. People like me who go gaga over merchandise featuring ride vehicles will be glad to know there is both a toy featuring Alien Swirling Saucers, but also an incredible Slinky Dog Dash & Dodge Power Boost Set. The souvenir cup featuring a Green Alien and the famous “claw” is certainly going to be a huge seller, but possibly my absolute favorite item is a Toy Story Land t-shirt featuring Woody, Buzz, and some Green Aliens riding the Disney monorail by the Magic Kingdom (with the monorail being a DIY version made out of a milk carton, which fits right in line with the overall theme of Toy Story Land.)

When Cars Land made its debut out in DCA back in 2012, the sleeper hit was Mater’s Junkyard Jamboree. On the outside it seems like a standard Whip It ride many of us have ridden a thousand times before at our local carnivals, but the Disney theming and riotous soundtrack sung by Mater himself made the attraction an instant hit with those young and old. While Alien Swirling Saucers doesn’t quite reach the highs that Junkyard Jamboree does, it is a solid ride that was exactly what DHS needed. Sure we all love the E-Ticket show stoppers like Tower of Terror or the thrill of rides of Rock ‘n’ Roller Coaster, but this park needed more family friendly attractions that little kids wouldn’t be scared of. Just as the music of Junkyard Jamboree helps elevate the ride experience, the fun techno playing during Swirling Saucers is just terrific. The smiles on guest’s faces as they spin around the track is infectious. As a pizza fan, I love the theming to pizza throughout the attraction (as the “backstory” of the ride is that Andy got all this stuff at Pizza Planet, and created the ride in his backyard.)

While the majority of Toy Story Land is completely new, one item in the area we’ve seen before is Toy Story Mania. An instant classic when it made its debut at DHS in 2008, Toy Story Mania is the “interactive” buzzword done right. In fact, Disney achieved pretty much the impossible. It created a game that can be competitively enjoyed by just about every demographic. Young or old. Male or female. Skilled or unskilled. With its intuitive gameplay, Toy Story Mania takes our favorite characters from the Toy Story series of films and uses them in an interactive shooting gallery game that will entertain everyone in the family. The queue itself is going to bring a smile to every adult who walks through it, as it is filled with references to classic toys and games we grew up with (not to mention the sensational Mr. Potato Head animatronic). The game itself is a visual tour de force, with bright and colorful 3D CGI graphics that flow seamlessly and make the attraction ingeniously addictive. For Toy Story Land, the entrance to Toy Story Mania has been moved from the old Pixar Place location to inside Andy’s backyard, complete with a new facade that evokes classic carnival style midway games of skill.

Slinky Dog Dash just may be the cutest coaster Disney has ever built. Completely themed around the concept that “Andy” built the ride from a store bought coaster kit – using his own toys to modify every aspect the project – Slinky Dog is pure fun from the queue to the actual ride experience. With several launches, dips, hills, and turns, Slinky Dog Dash has an unexpected amount of thrills despite not having any loops. The ride itself gives guests not only a great look at the overall land, but also allows some unique views of the upcoming Star Wars: Galaxies Edge and other iconic locations in the park. For me, one of my favorite parts of Expedition Everest is that slow ascent up and being able to look out and see things such as Spaceship Earth or the Swan & Dolphin resort, and Slinky Dog offers something similar on a much smaller scale.

Because the state of Florida in the summer is the closest one can get to actually walking on the surface of the sun, the best time to appreciate Toy Story Land is at night. While the land has some fun attractions, good food, and great merch, one thing it doesn’t have much of is SHADE. Instead of sweating it out under the hot sun, considering coming back just a few hours later and seeing the entire land transform with its awesome lighting package. The entire area comes to new life once the sun goes down, and both Slinky Dog Dash and Alien Swirling Saucers go up a notch with the added neon and lights.

So there you have it: Six Reasons We Love TOY STORY LAND! See you next weekend for the latest installment of the SATURDAY SIX, where we’ll look at something fun from the world of Disney and Universal. If you enjoyed yourself, be sure to check out The Magic, The Memories, and Merch! articles, or, for your listening pleasure, check out the E-Ticket Report podcast. You can also follow Your Humble Author on Twitter (@derekburgan).

Special Thanks to our spirit animal Brandon Glover, the bio-est of all reconstructs @bioreconstruct, the theme park tripod titan Travis Terrell (while not podcasting with the Grim Grinning Ghosts, Travis can also be found posting incredible shots on INSTAGRAM), the man who found the basement of the Alamo Jeff Williams, the SAT SIX Fun Squad of Parkscope Joe and Nick, the author of the Unofficial Guide to Universal Seth Kubersky, the sommelier of Tonys Town Square Brian Carey, and blogger to the stars Megan Stump for their invaluable assistance with this article. Be sure to also check out Brandon on The Park Blogger podcast with goofballs co-hosts Aengus Mackenzie and LitemAndHyde , while fellow Potterheads may enjoy Meg’s work on the Central Florida Slug Club.