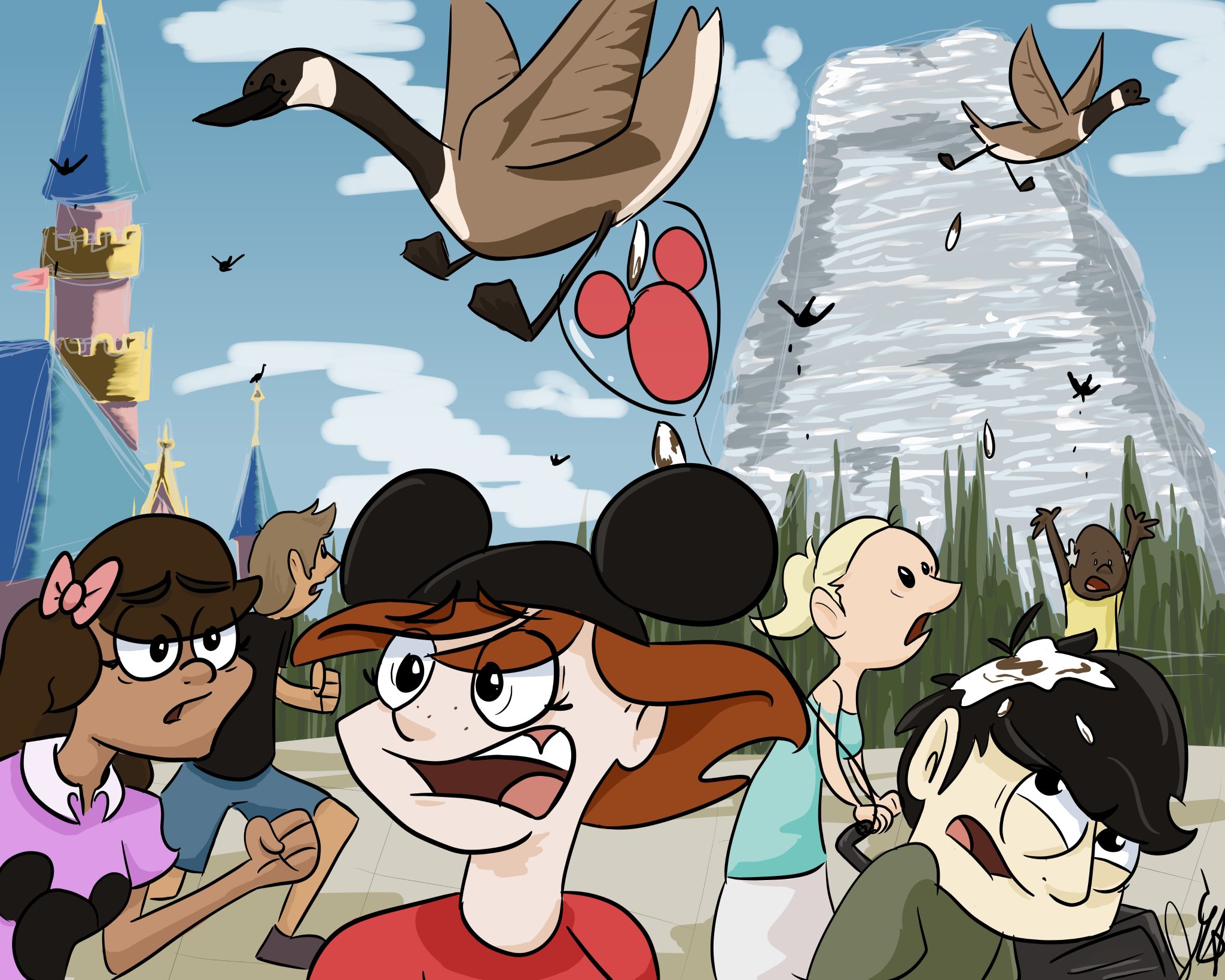 This week’s SATURDAY SIX is one of our favorites as we present the Fourth Annual Theme Park “Turkeys” of the Year. For Thanksgiving this week we took a look back at things both Disney and Universal fans should be thankful for, but today we are going to go the other way. Gather ’round as we continue the fine tradition of awarding six Theme Park “Turkeys” to the craziest, most outrageous, or just downright weird stories of the year, concluding with the coveted Golden Turkey award. Let’s kick off the ceremony with a situation that was “for the birds”….

You thought YOU had a bad day at the parks? Back in June, a group* of geese took to the skies over Disneyland and rained down a hail of poop that was so dramatic that it brought police and firefighters to the park. Now, this may sound funny to you and me (and just about any other human on the planet,) but those with geese feces all over their rose gold Etsy Mickey Ears weren’t laughing. A total of 17 guests (11 adults and six minors) were defecated on, and to put that number in perspective only 15 guests are able to ride Finding Nemo Submarine Voyage per hour**.

This is why they ask you not to feed the birds people!! *It is called a “gaggle” of geese when the geese are on the ground. It is called a “skein” of geese in the air. This is one of those things that no one would know and would actually distract from the reading process like “tower” of giraffes, “smack” of jellyfish, or “losers” of theme park bloggers.

**Approximately. We asked TouringPlans Disneyland expert Guy Selga to confirm but he was too busy playing with all the Disney junk he recently bought in Tokyo.

“An object at rest stays at rest, especially if it is after a long day at the Magic Kingdom.” – Sir Isaac Newton’s rarely talked about second law of motion

This fall the SATURDAY SIX had a special pull-no-punches investigation on the controversial subject of Disney Pet Peeves. One pet peeve common to many guests is such a hot topic that even we didn’t draw much attention to it outside a quick blurb at the tail end of the article. Some guests watching nighttime spectaculars aren’t all that fond of adults putting kids on their shoulders, or even adults standing. You may be sitting there reading this and thinking, “That’s crazy, the fireworks are in the sky, who cares if they are standing?” And you would be correct. HOWEVER, there are a percentage of Disney guests who apparently like to sit down on the pavement in front of Cinderella Castle, like they are having some sort of picnic. These guests do not appreciate when other guests would like to stand. We’ve heard from many standing guests that other guests seated on the ground have jeered them, and even outright yelled at them to sit down.

One guest took matters into her own hands, literally. Back in April, a woman choked out a teen for blocking her view of Wishes. The woman, a Michigan native, was arrested felony child-abuse charges and released on a $2,000 bond. To put $2,000 in perspective, for $1900 she could have stayed one night at the new Wilderness Lodge cabins and used the extra hundred bucks to just about cover a Disney After Hours ticket.

# 4 – That Time a Woman Got Caught Stealing runDisney Bibs

“Now you wouldn’t believe me if I told you, but I could run like the wind blows. From that day on, if I was going somewhere, I was running!” – Forrest Gump

Ever go down a rabbit hole and not come up for days? That was us back in May, when we stumbled upon a story that we still can’t completely wrap our heads around. As a two time runDisney medal winner, I’ve tasted that sweet nectar of success that only comes with completing a runDisney event. What I didn’t know is that apparently there are some deep dark corners of the runDisney universe where scum and villainy skulk about. One of these villains, who happened to be a serial bib thief, was publicly shamed by MarathonInvestigation.com in a stunning To Catch A Bib Thief article. I bet you didn’t even know there is RAMPANT cheating in marathons across this country, did you? We’ve uncovered a niche society, one that makes the eBay pirates at Disney Outlet Stores seem like salt-of-the-Earth types in comparison.

“It’s a damn poor mind indeed can’t think of at least two ways to spell a word.” Andrew Jackson (as said in Hall of Presidents at the Magic Kingdom)

Over the years, we here at the SATURDAY SIX have quietly been putting together a Walt Disney World signage Hall of Fame. Who can forget the famous “Wax Been Done” sign at Disney’s Polynesian Village Resort? How about the “Disney is closed. Opens Monday” from our sister series the Magic, the Memories and Merch!? Drivers must have loved being under a massive metal sign masking taped onto concrete at Disney Springs. All of that was just child’s play compared to our entry this year, when Disney pulled a page out of the @derekburgan twitter account with a typo of epic proportions. Instead of “Epcot,” a newly installed road sign read “Epoct.” Now I’m not sure what the five greatest days of my life are, but seeing this sign on the road at WDW is one of them.

What an appropriate followup to the 2016 Turkeys. Last year we included a story on Shanghai Disneyland releasing an Etiquette Guide to remind guests not to use the landscaping at the park as a bathroom. In typical American fashion, many people saw that story on social media and mocked the guests. Keep in mind that many parts of China don’t have access to bathrooms in the way we do over here and that culturally it is just totally different (sort of like how Europeans think 8 ounces of room temperature soda with no refills is acceptable when we here in ‘Merica demand frosty 64 ounce Big Gulps with unlimited refills.)

Anyhoo, when Pandora: The World Of Avatar: From the Creative Genius James Cameron opened this Summer, something funny happened along the way. First, messages from guests starting popping up on social media, such as this one found on Facebook:

Now, despite many guests having similar stories, there was still a part of the Disney Community (many of which who run sites with the words “WDW” or “Disney” in the name) who vehemently denied this was happening. Then something really amazing happened. Disney put signs out in front of Flight of Passage alerting guests their were no bathrooms in the queue. This is interesting because Disney hasn’t done this for any other attraction. Over the years plenty of rides have had extremely long waits, especially attractions when they are new or during next level bananas crowd times like New Years Eve. Yet not a single one of those attractions has ever had a sign alerting people there is no bathroom in queue.

And if you think that sign solved the problem, well I’ve got two words for you… (nay, nay.)

“Now, there are some who would like to rewrite history – revisionist historians is what I like to call them.” – George W Bush

Let’s stay in Pandora for our coveted Turkey of the Year. For this one we need to have a little back story. On January 10, 2014, when Disney broke ground on Pandora: The World of Avatar, it invited many of the company’s big wigs to take part in a next level bonkers photo op. Holding giant 10 foot blue shovels were Disney’s own George Kalogridis, Meg Crofton, Tom Staggs, Bruce Vaughn, and Joe Rhode along with Avatar producer Jon Landau. A blue Na’vi was then photoshopped into the picture. At the time, many in the company and in the Disney community, believed that Tom Staggs was the heir apparent to Bog Iger, and would be replacing him as the head of The Disney Company when Iger retired.

In April of 2015, FastCompany.com produced a story titled The Messy Business of Reinventing Happiness. In this article it described how Disney had invested a Billion dollars into MyMagic+ as a way to completely change the infrastructure of Walt Disney World.

The board broke into applause, and the meeting came to its close. The directors were chatting and readying to leave when Iger, aware of the challenges still ahead for MyMagic+, regained the attention of the small room. He looked directly at Staggs. “This better work,” he said, bluntly and sternly. “This better work.”

The theater was quiet, the elation gone. Iger repeated, “This better work.” – The Messy Business of Reinventing Happiness via FastCompany.com

Meg Crofton, then President of Walt Disney Parks and Resorts, retired in June of 2015. In January of 2016, Imagineer Bruce Vaughn resigned from Disney. Later that year in April, Tom Staggs unexpectedly handed in his resignation. A story many inside the company were trying to sell was that Staggs didn’t have the trust of key members of Disney’s board. One of these board members allegedly upset by Staggs was Marvel Entertainment CEO Ike Perlmutter. Kevin Feige, the man pretty much responsible for the success of the Marvel Cinematic Universe, also had problems with Perlmutter, and in 2015 went to Disney Studios head Alan Horn to have Perlmutter removed from the Marvel film division.

When Pandora: The World of Avatar opened in 2017, we were all blown away by the incredible landscaping and the amazing Flight of Passage attraction. However, it was in Sat’uli Canteen restaurant where quite possibly the most amazing thing in the entire land resides. If you look on the walls you will find the very picture that was taken in 2014, except now Meg Crofton, Tom Staggs and Bruce Vaughn have been photoshopped out and replaced by different people (Jon Landau was also photoshopped into appearing as his character in the land, Marshall Lamm.)

Remember last year when Disney misquoted Walt Disney on their own paper plate?

So there you have it: the Fourth Annual Theme Park Turkeys of the Year. See you next weekend for the latest installment of the SATURDAY SIX, where we’ll look at something fun from the world of Disney and Universal. If you enjoyed yourself, be sure to check out The Magic, The Memories, and Merch! articles, or, for your listening pleasure, check out the Pardon the Pixie Dust podcast. You can also follow Your Humble Author on Twitter (@derekburgan)

Special Thanks to crack staff photographer Brandon Glover, theme park’s Michaelangelo Shelby Denham, the bio-est of all bioreconstructs @bioreconstruct, Blog Minnie‘s better half @blog_mickey, the Four Square Mayor of Guest Relations Tim Grassey, the incredibly talented Juliette Elton, , and blogger to the stars Megan Stump for their invaluable assistance with this article. Be sure to also check out Brandon on The Park Blogger podcast with co-hosts Aengus Mackenzie along with Meg’s work with the Central Florida Slug Club.