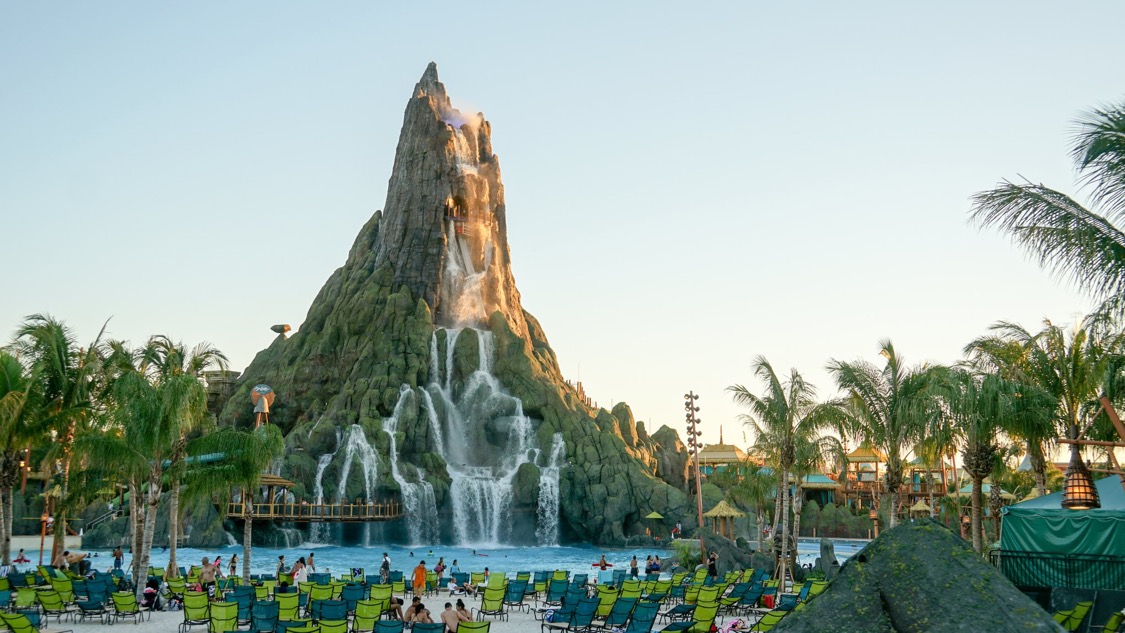 This week’s SATURDAY SIX  is our annual Thanksgiving Special and takes a look at Six Reasons for Theme Park Fans to Give Thanks. 2017 was another great year to be a theme park fan, and for this Thanksgiving we are going to take a quick break from all the turkey, football games, and Black Friday pre-planning to count our blessings and thank the parks and resorts that we love so much. So, for one day only, we ask that all Disney and Universal fans put aside their differences and spend a brief moment appreciating all the wonderful things that we can share together, starting with…

# 6 – The Magic of Christmas at Hogwarts Castle

While Walt Disney World has been putting together a stunning display of projection mapping at several of their parks (including one of our favorites, the Tree of Life Awakens shows at Animal Kingdom) Universal finally created a brand new show of their own using the technology with The Magic of Christmas at Hogwarts Castle. Using the iconic Hogwarts Castle as a canvas, this new show pays homage to fan friendly moments from the Harry Potter films and books. With references to the Yule Ball, ghosts singing, the flying Ford Anglia, quidditch, and even Weasley Wizarding Wheezes, fans of the Potter Universe are going to love this new Holiday event.  We here at the SATURDAY SIX headquarters will watch anything that has a John Williams score, and The Magic of Christmas at Hogwarts Castle is Universal’s first E-Ticket nighttime show worth going out of your way to experience.

DVC is becoming a larger part of of the Walt Disney World experience, and this year their expansion at Wilderness Lodge (already one of our favorite resorts on property) was a major home run. As TP’s own Tessa Koten found out on opening day, the new Geyser Point Bar & Grill immediately became one of the more unique quick service locations at The World with a fantastic view to boot! The new water side cabins may be an even bigger hit with guests. Sleeping up to 8 and fully equipped with all the amenities DVC members are accustomed to, the cabins seem to be an improvement over the already impressive Poly bungalows. With DVC on this type of roll, it actually has us excited as to what they will bring to the table with the new areas coming to Coronado Springs and Caribbean Beach in 2018.

Ever since Disney debuted the paper FastPass system in 1999, the theme parks have been continuously working on ways to eliminate the biggest complaint by theme park guests, “long lines.” This year Universal took a major leap and created something that we could be seeing often in the coming years with the “queueless” Race Through New York Starring Jimmy Fallon. Instead of the standard stand-by and FastPass/Express Pass lines with everyone going through a series of switch backs seemingly designed by Temple Grandin, Race Through New York allows guests the opportunity to explore the entire area rather than wait in a traditional line. With museum-like areas dedicated to the history of The Tonight Show, along with live entertainment including Hashtag the Panda and the must-see Ragtime Gals, Race Through New York may be the first attraction in the history of theme parks in which the queue is hands down better than the actual attraction you’re in line for. Heck, even the ride’s safety video is a blast to watch!

We mentioned earlier that Disney is the best in the business at projection mapping, and with the new Happily Ever After show at the Magic Kingdom, they have perfected the technology. Disney animators used the architecture of Cinderella Castle itself when designing the new show, which allows some incredible moments in the show such as The Hunchback of Notre Dame‘s Quasimodo moving along actual parts of the castle! The actual projection mapping part of the show is so good you almost forget that there is still the crowd pleasing fireworks part to come. Boy, do their fireworks and the combination of the projection mapping and insane firework display separate Disney from their competition. Let’s face it, this show is so good we don’t even mind that it replaced our beloved Wishes, and how often does that happen (we’re looking in your direction Test Track…)

While Universal tried a new approach to lines with one attraction at Universal Studios Florida, they went park-wide at the jump with Volcano Bay. With Tapu Tapu, Volcano’s Bay version of the “MagicBand,” guests checked into rides and were able to explore other areas of the park rather than just stand in line. While this caused a lot of angry guests at first, it is clear both Universal and Disney are trying to completely reverse the “rules” that we as theme park fans have been trained for decades to follow. With constant sell outs throughout the year, one has to imagine Volcano Bay has been a success wildly beyond what Universal could have dreamed.

You can’t talk 2017 without mentioned Pandora: The World of Avatar. For what seemed like a decade, Disney worked tirelessly on creating a land no one asked for. The end results were SPECTACULAR. The land itself is the most gorgeous of anything at Walt Disney World, and that covers a lot of ground. The land is filled with wonderful details, and the land’s signature ride – Flight of Passage – has already become the highest-rated attraction in all of WDW. Sat’uli Canteen, Pandora’s quick service dining, has not only some of the most interesting foods on property, but even the bowls that food is served in are unique. The adopt-a-banshee toy at The Rookery has proven to be a huge hit in the merchandise department, giving The Mouse a good equivalent to Universal’s Ollivander’s wand experience. Disney spent a small fortune on Pandora, but you can see every single dime on display.

One of our favorite parts of Disney’s Boardwalk is Ample Hills creamery. While this delicious ice cream place opened in 2016, this year guests actually have the opportunity to have these tasty treats delivered to their home! Now technically this is shipping from Disney, but since this is our favorite ice cream AT Disney, we’re going to overlook that minor fact. So CLICK HERE if you want to get Gooey Gooey Butter Cake, PB Wins the Cup, or The Munchies delivered straight to your house!

So there you have it: Six Things Theme Park Fans Have to be Thankful for in 2017! See you next weekend for the latest installment of the SATURDAY SIX, where we’ll look at something fun from the world of Disney and Universal. If you enjoyed yourself, be sure to check out The Magic, The Memories, and Merch! articles, or, for your listening pleasure, check out the E-Ticket Report podcast. You can also follow Your Humble Author on Twitter (@derekburgan). Special Thanks to crack staff photographer Brandon Glover, my personal protege Hunter “Elvey” Underwood, the bio-est of all reconstructs @bioreconstruct, Double T Travis Terrell, the most popular man in theme parks Banks Lee, hot shot Michael Carelli, and blogger to the stars Megan Stump for their invaluable assistance with this article. Be sure to also check out Brandon on The Park Blogger podcast with goofballs co-hosts Aengus Mackenzie and LitemAndHyde , while fellow Potterheads may enjoy Meg’s work on the Central Florida Slug Club.

2 thoughts on “SATURDAY SIX THANKSGIVING SPECIAL: Six Reasons for Theme Park Fans to Give Thanks in 2017”