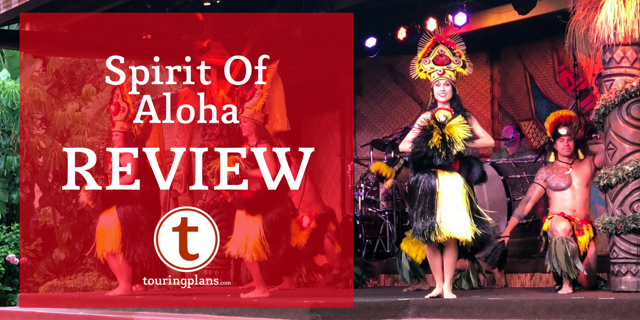 May is National Luau Month–who knew? To celebrate that (and my daughter’s birthday), we headed on over to the Spirit of Aloha show at Disney’s Polynesian Resort.

Unlike many dining reservations at Walt Disney World, we found it incredibly easy to secure a last-minute one (less than two weeks out) for our party of three for a Saturday evening, with availability at all three categories of seating. The show is offered twice nightly (5:15 and 8:15 PM) on Tuesdays through Saturdays. Reservations can be made by calling Disney Dining (407-WDW-DINE) or online, but not through the My Disney Experience app. Payment in full is due at the time of booking. Prices range from $66-78 for adults and $39-46 for kids ages 3-9. If you’re on the Disney Dining Plan, you can use two table service credits for a category 2 or 3 seating area.

The night of our luau, I think that the gods must have been angered by all the celebrating, as there was a torrential downpour on our way over. Although the show can be cancelled for inclement weather, it takes cold temperatures (below 50 degrees) or lightning to cancel–rain simply means you’ll be handed very flimsy ponchos to help you get from the Polynesian lobby to Luau Cove (a five-minute walk).

As we entered Luau Cove, we were taken to our Category 2 table, which was slightly off center from the stage, but an unobstructed view and only one table away from the stage. It was the perfect spot for us, as it provided better shelter from the rain than the people right next to the stage. Thankfully before the show began, the rain let up considerably, but other people had mentioned that the seats closest to the stage should be designated as splash zone on rainy nights. Once we were seated, our server (who was exceptional) went over the menu with us to see if there were any dietary concerns and to take the drink order. Drinks included soda, a selection of wine and beer, hot or iced tea, coffee, pink lemonade, and milk. For an additional cost you could order non-alcoholic specialty drinks, specialty cocktails, and bottled beer. When we arrived, the appetizer plate was already on the table. On the plate were mixed greens with ginger-lime dressing, soba noodle salad, and fresh pineapple. Hidden under a napkin underneath the appetizer display were some pineapple-coconut rolls. If you have a picky eater with you, there’s not much there that will be of appeal except possibly the rolls, which were very plain.

I personally enjoyed the appetizers, although nothing there was a stand-out wow. The soba had a little bit of heat to it, but nothing horribly unpleasant. The salad was good, although the dressing was a little on the sweet side for my preference, so I didn’t go back for seconds. I was the only person at the table who loves fresh pineapple, so I certainly got my fill of that. One odd disappointment was that the rolls were not served with butter. The flavor was good, but having room-temperature rolls without butter was a missed opportunity–then again, had it been hot rolls with butter, I would have filled up on those in a heartbeat.

Once everyone who arrived on time had been seated and all were happily munching away on the appetizers or getting their drink orders in, the first part of the show began. In essence, it was a little bit of music and introduction of the characters. Even though we were close to the stage, it was very noisy in the seating area, so it was hard to hear all the spoken words. In the end, you don’t have to worry about missing the details of the show setup–the plot is pretty thin. You’ve got Auntie Wini, who runs a hula school, and one of her star students, Leilani will be leaving for the mainland soon, with a parade of characters coming on stage to help tie everything together. The beginning of the show also divides the seating area into different islands, which serves practically no purpose other than to have people sitting around you ask “What did they say we were supposed to say and do when our island is mentioned?” Thankfully, this beginning part of the show is relatively short, and as it wraps up, the tray of main course foods is brought to the table. The dishes on the main course platter included pulled pork, roasted chicken, pork ribs, steamed vegetables, and a rice that tasted like it had coconut in it (although it was listed on the menu as regular ol’ jasmine rice). Because my daughter can be very particular about sauces (as in doesn’t like any), so we ordered cheese pizza for her from the kids menu. The kids’ menu also included grilled chicken or fish of the day with green beans and brown rice or mini corn dogs with tater tots. There was no additional fee to order these foods for her, and she still was able to eat what she desired from the main platter. The pulled pork and the roasted chicken were the highlights of the food. The pulled pork had a hint of sauce on it, but it wasn’t dripping with BBQ. The roasted chicken was cooked well, very similar to a good rotisserie chicken. The pork ribs were a major letdown–little to no flavor, and somehow both greasy and dry at the same time. The rice had a subtle coconut flavor to it, and was fairly good, although by the end of the meal, it was already getting stale. A major surprise was the vegetables–they were delightfully steamed, cooked but crisp instead of soggy. Although the meal is all you can eat, for the two of us (plus a bit of chicken and rice for our daughter), there was plenty of food on the plate, so we didn’t need to ask for seconds. As we finished up the food, the show started back up again, with a little more zip than before. My daughter especially enjoyed the Birthday Luau song (and hey, that is the reason we booked this!). During the performance, the dessert was brought out. In my view, a mediocre meal can be made exceptional if you have a WOW dessert to end the meal. Unfortunately, the dessert for this meal is anything but wow. The menu says it was a pineapple-coconut guava cake with chocolate crunch. What it tasted like was cafeteria-grade strawberry shortcake. Thankfully, they brought out a single rice krispie square for my daughter to eat. Even the portion size was lackluster–what was a serving for the table of three (shown below) would have been a perfectly acceptable size for a single serving. Because it was such a mediocre dessert, however, none of us wanted to ask for more. We decided to go to Pineapple Lanai for some soft serve after the show. Now that all of that is out of the way, let’s get to the real reason why you’re shelling out $70-ish for this meal–the actual dancing. Full disclaimer, I’ve never been to Hawai’i, I’m not Polynesian, and so any judgments that I could make about authenticity would be based on watching Don Ho, Lilo and Stitch, and a few Elvis movies. I’m fairly certain that the costumes were made in a location down the road from my house instead of the islands, and likely many of the performers were not life-long residents of the islands that were flown in special for the show. (Although I have to admit that Auntie made me a believer in aloha!) All that aside, the final 45 minutes of the show was incredible. The performances were distinctive and energetic, the dancers were skilled and engaging, and overall it was a very fun show that I’d gladly see again. In addition to Hawaiian hula, you had dances from Samoa, Tonga, and the Maori people of New Zealand, among others. Each dance was briefly explained and then performed for an enthusiastic crowd. The highlight of the evening included the fire dancer performing all sorts of “Don’t try this at home” skills for the delight of the audience. (For your enjoyment, I’ve included photos of the different dances at the end of this article.) At the end, the main characters came back to wrap it all up, and send everyone on the way with the spirit of aloha in their hearts. In the end, is it worth it in terms of time and money to visit Spirit of Aloha? It really depends–as long as you don’t go in with thoughts that this will be a stand-out meal (food-wise), and if you can smile politely through the campy setup, there’s a really good time to be had here. Where it is especially useful is if you have younger kids who wouldn’t be likely to sit through a longer show of Polynesian dance. This provides enough of a show that they can enjoy it without asking “is it over yet?”

As tough of a critic as I am sometimes, my daughter has all the critique that I have, plus the benefit of not having any filters (thanks to being a spunky eight-year-old). As we walked to Pineapple Lanai for some soft serve, I asked her if she’d ever want to do it again. In her words, “If there was a special occasion, I would take someone to see it, because the show is fun. But it isn’t something you’d do just because you’re hungry–you’d want to have a special occasion to celebrate.” Spirit of Aloha–come for the show, stay through the food? Regardless, it made for a memorable birthday celebration, and that’s all that mattered to us in the end. Mahalo to the servers, band, dancers, and other performers of Spirit of Aloha. 3 thoughts on “Say Aloha to Disney’s Spirit of Aloha”