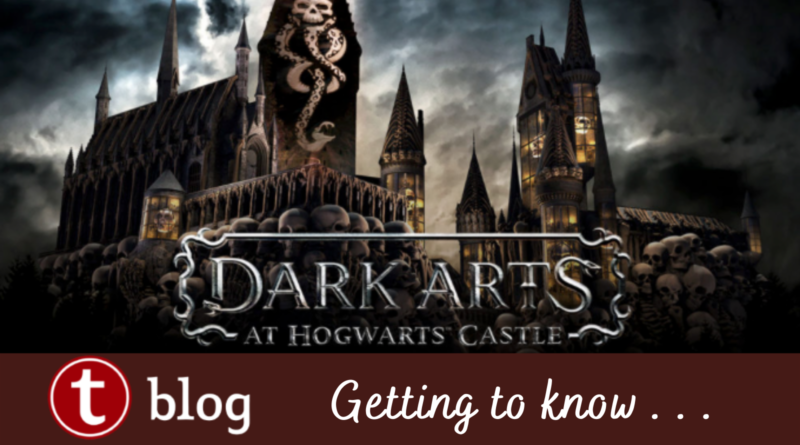 The scariest nighttime light show in the Wizarding World of Harry Potter, Hogsmeade in Islands of Adventure returned on September 18, 2021. This seasonal variation of the Nighttime Light Show at Hogwarts Castle is expected to run until October 31, after which the projection show will take an expected break to switch to the holiday version. According to Universal Orlando, this projection show with some fireworks will run nightly from dusk until park closing. 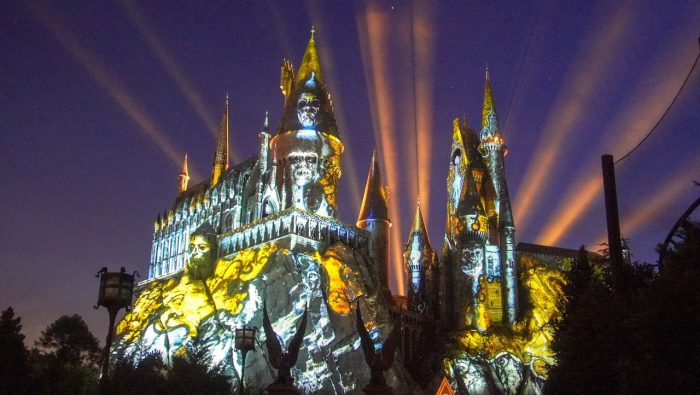 Early on this show has been cancelled or not happened on a few nights. On Sunday, September 19, it was rained out due a major rainstorm. On Wednesday, September 22, it did not happen simply because the park closed at 6pm. Anyone interested in this experience should check weather and park hours closely. 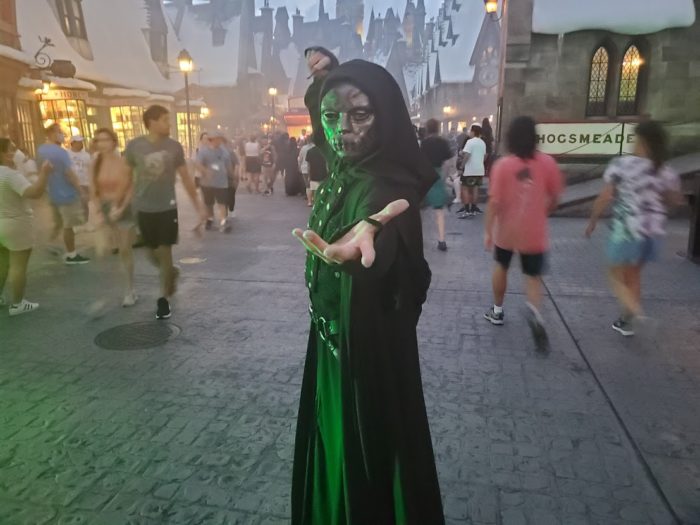 The highlight of this event, in my opinion, is the roaming Death Eaters. On the night I enjoyed this show, there were about ten Death Eaters. Several props are set up in Hogsmeade for the Death Eaters to use. There is a short opening type ceremony at the staging area. Spooky green lights are added during the dusk period to enhance the arrival of Death Eaters. With it being Universal Orlando, there is fog at the staging area for them too. This worked well especially because it has been raining, at least lightly, most nights since this show started. When the Death Eaters came out to terrorize the guests, the effects were enjoyable. However, I learned that Death Eaters do not like rain, so they do not come out and play in the rain. Though this can be disappointing for guests, there are safety issues even in the Wizarding World. 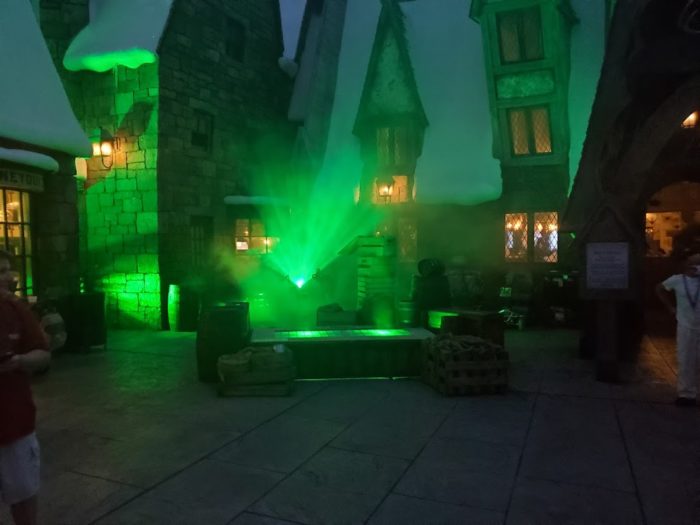 After the Death Eaters’ opening ceremony around dusk, they roam through the crowd interacting with people. As in 2019 when this first was done, the characters prefer to interact with children. Children seem encouraged to “duel” with the Death Eaters who defend against the young wizard spells. This was quite entertaining on September 20 when I got to see several of these extended duels happen. 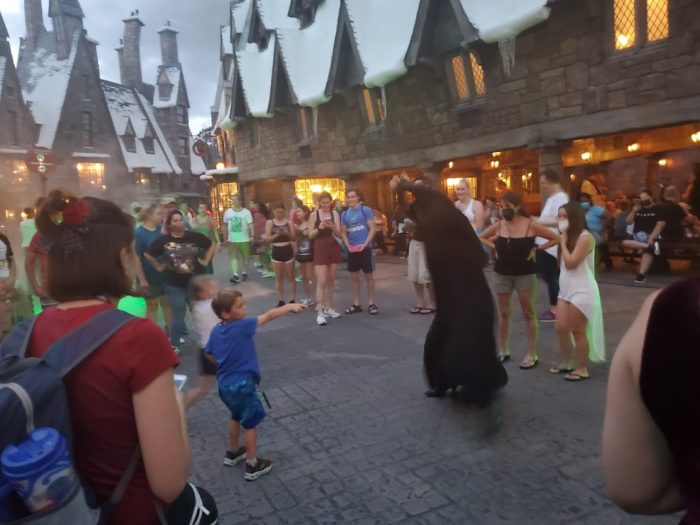 During the Death Eaters’ time roaming, there were some special effects set up for magic to happen. I had not seen this before and they worked very well. I could probably have watched this type of interaction all night. The Death Eaters are an incredible addition but also part of the problem.

The Death Eaters tended to stay near the Three Broomsticks towards the exit of Hogsmeade to go to the Lost Continent area. This is because a huge crowd is lining up like sardines in a can to watch the projection show. The expected negative to this event is how crowded and limited in terms of space Hogsmeade is for nighttime light shows.

Though the team members do a good job, it is a crowded area. I found this hard to enjoy even before some virus short-circuited the world. The crowd management is a terrifying for anyone wishing to social distance. If you are concerned about being too close to people for far more than 15 minutes, then this show might be an issue.  Maybe you could visit, see the Death Eaters, and leave. The people will be packed into the Hogsmeade area toward Hogwarts Castle to fill in all available space. I repeat…I do mean all available space!

The projection shows on Hogwarts Castle itself are well done but currently they are doing two showings a night with one starting after official park closing. I will not ruin the lightshow. However, if you have a fear of snakes or spiders then beware. Smaller children could easily be frightened during this projection show. 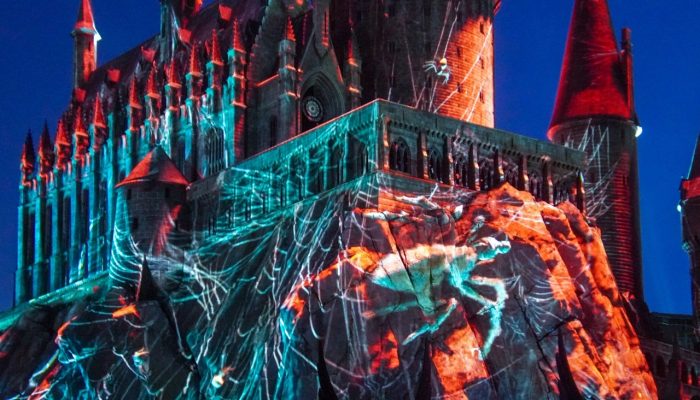 There is no terrible viewing area for this show if you get into the viewing area.  However, the best areas to view from are the bridge toward Jurassic Park and the area in front of the Frog Choir stage in Hogsmeade. If you plan to watch the projection show, you should arrive early. Depending on when it gets dark, you should arrive at least 40 minutes before that time to get a spot. Expect to be joined by many people.

If this sounds overwhelming, you might find a place to view from behind the Three Broomsticks on the patio. The view will not be of the full show, but it might be less crowded.

If you are visiting Islands of Adventure for more than one night, I would suggest spending one night arriving early to enjoy projection show. You can then spend the other night enjoying the Death Eaters experience itself.

Before you arrive, you need to know about the traffic flow in and out of Hogsmeade area. Once it gets to be near dusk, you will not be allowed to enter Hogsmeade from the Jurassic Park side. You will have to use the “by-pass” bridge that runs by the Jurassic World VelociCoaster to go around Hogsmeade. Hogsmeade becomes a one-way area with people only entering from Lost Continent and exiting toward Jurassic Park. 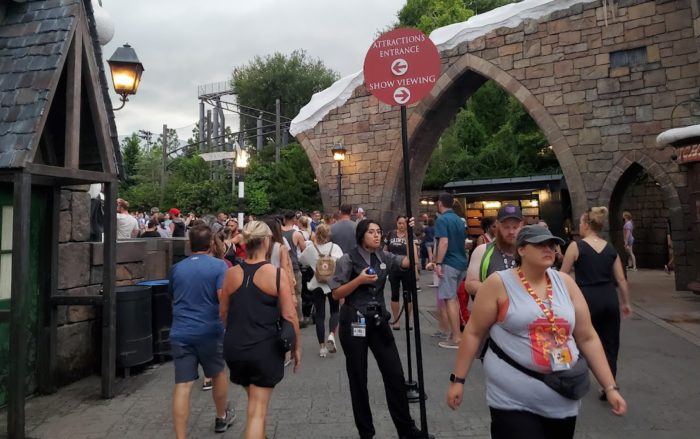 The show is well worth your time. If you are visiting before November, then you should add this to your touring plan.

Have you seen the nighttime entertainment in Hogsmeade for the Halloween season? Let us know what you think in the comments.