This week’s SATURDAY SIX takes a look at Running Universal’s Epic Character Races! Many theme park fans enjoy the increasingly popular runDisney races, but for the most part there hasn’t been something equivalent at the Universal Orlando Resort. There have been many 5K races held at Universal, going all the way back to the 1990s, but almost all of them were related to various charities or conventions in town. This past weekend, Running Universal took a major leap with theit inaugural Epic Character Races, which included the first ever 10K at Universal. Today we’re going to look at our favorite parts of the entire weekend, starting with…

The amount of synergy that our beloved Voodoo Doughnuts has had with Universal is incredible. Voodoo has baked up specialty donuts made for all of the resort’s signature events, including Halloween Horror Nights, Mardi Gras, and Grinchmas. There have also been donuts made to honor Jurassic Park, major holidays such as Easter, and even others to work hand-in-hand with Universal for charity.

So it was no surprise that Voodoo would come out with a specialty option for the Epic Character Races; in fact they came out with two! The creme-filled and frosted donuts had decorative “medals” for both the 5K and 10K races.  The 5K  had vanilla frosting while the 10K donut was chocolate frosted. The creme inside  both was peanut butter & banana flavored. The donuts were available to anyone, but guests participating in the events could bring their bib to the store and receive 15% off.

For those of us who love theme park-related merchandise, Running Universal had a decent sized lineup of items to purchase. These were available on check-in day when runners picked up their registration and bibs.

We here at the SATURDAY SIX love meeting characters when we go to both Universal and WDW, so of course one of the things we enjoy most at the various races is the opportunity to get photos with little to no wait. There’s also the benefit of seeing some characters that you rarely see in the parks.

The races at Disney and Universal show how passionate and creative theme park fans can be. “People watching” can be fun during an average day at the parks, but seeing the great costumes guests come up with for the racing events is a true highlight. Here are some of our favorites from this year.

For theme park fans, a good part of the allure of doing running events at Universal or Disney is being able to experience racing inside the actual theme parks. Both the 5K and 10K races had guests going through areas of Islands of Adventure and Universal Studios Florida. 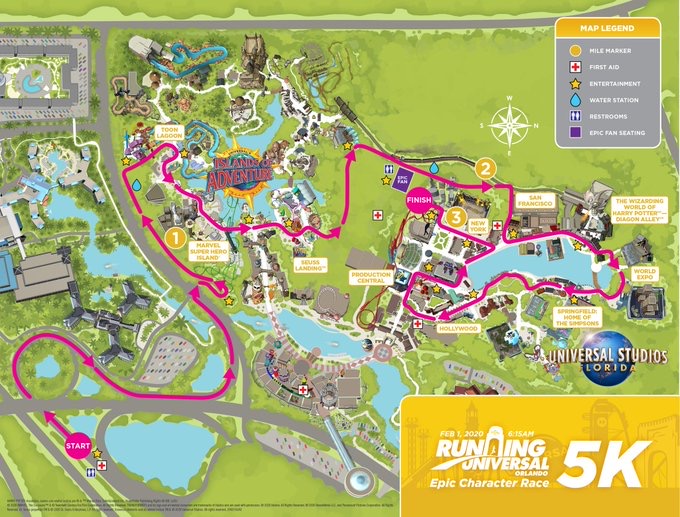 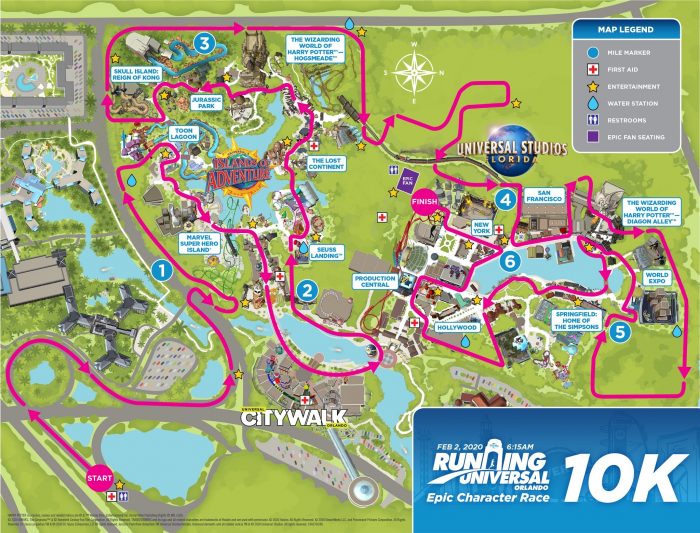 Before getting to the parks, runners first made their way through Universal CityWalk. One thing runDisney runners may appreciate is that  Universal gave guests enough space to actually run if they preferred. Another difference between the races at Disney and Uni, is that while you’ll often find volunteers throughout the courses at WDW, Universal used paid Team Members at all the positions.

The races allowed guests the opportunity to get some extremely rare photos at the Universal parks, including this sunrise photo taken in Diagon Alley.

The races also offered a look at some back of house items that day guests never see (or at best get quick glimpses of). This includes the track for the Hogwarts Express. Notice the spacing between the runners.  You’re not packed together like sardines, making the Running Universal races a good alternative for people looking for something more like their local races.

Here’s a great shot showing the section of track that splits, allowing two Hogwarts Express trains to be running simultaneously. One train going to Islands of Adventure, with the other making its way to Universal Studios Florida.

Of course the one thing runners look forward to seeing the most….the finish line.

Runners who are used to the high quality medals that runDisney awards finishers are going to be fans of the Running Universal hardware. Both the medals given to 5K and 10K participants were large, decorated with characters, made out of medal and were spinners.

So there you have it: The SATURDAY SIX looks at Running Universal’s EPIC CHARACTER RACES! See you next weekend for the latest installment of the SATURDAY SIX, where we’ll look at something fun from the world of Disney and Universal. If you enjoyed yourself, be sure to check out The Magic, The Memories, and Merch! articles covering the latest from the Disney Outlet Stores. You can also follow Your Humble Author on Twitter (@derekburgan).

The Best Meet and Greets at the UNIVERSAL ORLANDO RESORT

The Best Meet and Greets at Disneys’ MAGIC KINGDOM