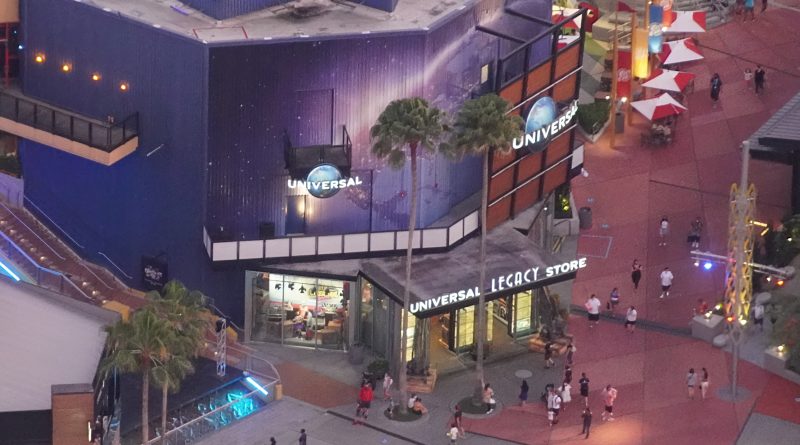 This week’s SATURDAY SIX takes a look at the Universal Legacy Store in CityWalk! It has been a rather interesting past few weeks for guests who enjoy shopping at the Universal Orlando Resort. Just yesterday, a brand new Universal Studios Store opened in CityWalk (directly next to our beloved Voodoo Doughnut). This massive new store replaces several former retail locations, including PIQ, Fossil, and Islands Clothing Company. Guests have a one stop shop for pretty much any Universal theme park brand you could want, including; Marvel Superheroes, the Minions of Despicable Me, Jurassic Park/World, and of course The Wizarding World of Harry Potter. Meanwhile, the former Studios Store has been transformed – and renamed – as the Universal Legacy Store.

While the Universal Legacy Store is still a retail experience where you can purchase a limited selection of items that are found at the much larger Studios Store, the big draw now is the fact that the store is an amazing walk-through the history of the Universal Orlando Resort. In fact, the entire store has been converted over to pay homage to the former concept of Universal Studios Florida – guests getting a behind-the-scenes look at how movies are made. The Legacy Store is filled to the brim with photos, props, and memorabilia from Universal’s past and present. Today we’re going to look at some of our favorite parts of the new Legacy Store experience, starting with….

When I’m at Disney’s Hollywood Studios, one attraction I always love spending time in is One Man’s Dream. As kids, when we are brought to theme parks we are obsessed with the rides. Later, as adults, for many of us the history of the parks themselves take on just a big importance to us as the attractions themselves. Throughout the Legacy Store you will see large signage going through some of the major events that led to the Universal Orlando Resort we know today. While the first Universal park in Orlando opened up in 1990, the timeline actually starts before that and begins in 1986 when the land was cleared and Universal Studios Florida was officially announced to the world.

There is a lot that happened in the late ’90s at Universal, so I’m going to cut the Legacy Store a little slack for not mentioning the opening of NASCAR Sports Grill in 1999.

Reading the entry for 2002 just makes me want Halloween Horror Nights to be a two-park event again. In a world in which IP holders can be notoriously controlling, it is amazing this even happened once.

2010, the year everything changed in Orlando.

2015 is the year Universal announced its partnership with Nintendo. Over in Universal Studios Japan, Super Nintendo World has opened to rave reviews. It is expected by many that when whatever version of Super Nintendo World opens in Florida (expected to be a part of the new Epic Universe theme park) we could see another big shift in the “theme park wars” between Universal and Disney, similar to what we saw in 2010 with the opening of The Wizarding World.

I personally would have mentioned the loss of themed butter here, but that’s me.

The Legacy Store is set up like you are walking through a working production area. Shelves and displays are marked as if you were a production assistant on set and needed to find something for your movie. There are areas labeled with titles such as COSTUMES, EGYPTIAN, MEDIEVAL, AUTOMOTIVE, NAUTICAL and several more. In each area, you’ll find bits of Universal’s history themed to that section. But throughout the store you’ll discover some fantastic items.

Like Disney’s Hollywood Studios – which itself was fast tracked to open to hurt Universal’s chances of succeeding in Florida – the changes to Universal Studios Florida over the years are dramatic. It seems almost impossible to believe that there were walk-around characters based on the Marx Brothers, an attraction based on Alfred Hitchcock films, and even a stunt show based on Universal’s old western films. The Legacy Store has nods to all of it and more!

The Universal Orlando Resort attractions of today are also represented.

The Universal Orlando Resort has seen many changes over the years. In fact, the only thing constant is change. At Universal Studios Florida, the only opening day attraction still in the park is E. T. Adventure. Meanwhile, over at Disney’s Magic Kingdom, a park which opened 20 years before USF, the park still has over a dozen opening-day attractions still in operation today. While Universal fans are used to attractions being turned over, there are two rides which stick in their craw like an EPCOT fanboy holding onto Horizons. Jaws: The Ride and Back to the Future: The Ride hold a special place in the hearts of many Universal fans. I could write 10 essays on why The Wizarding World of Harry Potter – Diagon Alley blows away Amity (the home of Jaws: The Ride) and how the introduction of Springfield USA was a massive improvement over BTTF: The Ride, but it would be wasting time and energy. Thankfully, the Legacy Store gives fans of both of these attractions some wonderful items and photos to appreciate.

# 1 – Creation of the Universal Orlando Resort

For theme park history buffs, the Legacy Store is filled with photos and video that you need to go out of your way to see. It’s a fascinating look at the 30+ year history of the resort, and something that UOR fans don’t get often because Universal doesn’t have a D23-like club or convention. The Legacy Store delivers the nostalgia that many people want, and it does it in a spectacular way.

The Universal Legacy Store in CityWalk has at least three photos of the original Florida gateway arch. In the photo below, notice the construction fence and excavation.

Outside the Legacy Store sit two large gargoyles. These two large creatures used to sit on the old Universal arch.

The arrow below is pointing to one of the gargolyes.

Below is an aerial photo showing the Universal Studios Florida parking lot, directly in front of the park’s entrance.

Compare the photo above to a March 12, 2021 aerial of same area. Unbelievable!

What I find exciting about the Legacy Store is this: now that the Studios Store is officially open, I think the chances of the Legacy Store selling more “Legacy” items are pretty good. Fill up the store with shirts, magnets, and items relating to Universal Classic Monsters, Back to the Future, Jaws, and more. I think the market is there as kids who were brought to the parks in the 90s and early 2000s are now at an age where they have disposable income and want to revisit their youth. Imagine being able to buy a t-shirt or print with the Universal Studios Escape logo on it?!

So there you have it: The SATURDAY SIX Checks out the Universal Legacy Store in CityWalk! See you next weekend for the latest installment of the SATURDAY SIX, where we’ll look at something fun from the world of Disney and Universal. If you enjoyed yourself, be sure to check out The Magic, The Memories, and Merch! articles covering the latest from the Disney Outlet Stores. You can also follow Your Humble Author on Twitter (@derekburgan).