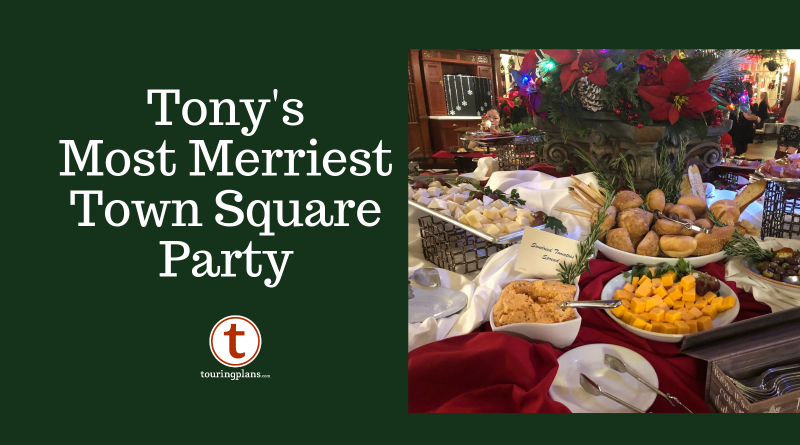 For years, I’ve been saying that I wish Disney would offer an appetizer-type party in addition to dessert parties for families who are not huge fans of all those sweets. It was only natural that when Disney finally did decide to offer something like that, I should at least give it a try, right? Tony’s Most Merriest Town Square Party is offered during Mickey’s Very Merry Christmas Party, and provides savory and sweet foods and reserved viewing location for Mickey’s Once Upon a Christmas Parade. First, let’s address the elephant in the room. To get to the Christmas party itself, you’re having to drop hundreds of dollars for your family to walk into town square and be covered in snoap flakes falling from the sky on an 80-degree night. Then, to go to this extra party, you’ll need to shell out another $99 per person. It’s a painful amount of money for an event that lasts from 7 p.m.-midnight, and party that takes up 9:30 p.m.-12:30 a.m., overlapping the normal party atmosphere. The initial reaction I got from people when I said I was booking it for my family was one of shock. But my experience, both at the Very Merry and at Tony’s has convinced me that, if you can swing the budget, it actually is worth the price depending on how you like to party–so much so that if this were offered for other hard-ticket events, I probably would choose to do this again, and might even consider skipping something like the Very Merry without it. We arrived at Mickey’s Very Merry Christmas Party around 6 p.m. and had our wristbands on to walk down Main Street by 6:30. All up and down Main Street, people had started lining up for the first parade of the night. Think about that for a moment–you’ve paid hundreds of dollars for a 5-hour event, and you’re spending the first two of it holding down a curb spot on Main Street. By the time you see the parade, you only have three hours left. My very first thought was “Thank goodness we already have our spot reserved for the second parade–there’s no way I’d be happy sitting there for hours.”

After heading for a quick ride on the PeopleMover and grabbing cookies at our first stop, we were hungry and would typically grab something from a quick-service restaurant for dinner. Instead, we wandered to Adventureland to get some of the treat stop snowman pretzels as a light snack to tide us over until it was time for us to eat. On the way, we saw a half-hour line at Casey’s and people sitting outside Crystal Palace waiting for their meal time. As we wandered around to get a painful amount of cookies for the night, we saw a lengthy line to check in for a meal at Be Our Guest as well. Dinner at Crystal Palace will set you back more than $50 per adult, and doesn’t include beer or wine. It also means that you’re taking 60-90 minutes out of that precious party time for that meal. My second thought of the night was “Gee, I’m glad we don’t have to wait in line for food.”

By 9:00 p.m., we had hit every treat station in Magic Kingdom, got our Sorcerer’s of the Magic Kingdom card, and seen the stage show at the Castle and in Tomorrowland, so it was time to wander back to check in for the party. The first parade was finishing its rounds, and people were rushing to grab every possible space for the 10:00 fireworks. Instead, we were heading on in to relax a bit before the fireworks.

The check-in line was incredibly short, and we were given a second wristband to show we were part of the Tony’s party for our parade viewing spot. The woman at the check-in desk assured us that attendants would be looking for that wristband in the parade viewing area, and to make sure we didn’t lose it. Promptly at 9:30, we were admitted into Tony’s. The food is found at three different stations throughout the restaurant, and there were also three drink stations as well. The first station that you run into is the hot food station. The food at that station included meatballs in marinara, beef empanada bites, slices of pizza (small cheese, pepperoni, and veggie pizzas), smoked chicken and leek in puff pastry, and Boursin cheese-stuffed artichokes. (A word of caution–if fried foods aren’t your thing, this is a party to skip.) I am not sure what the capacity of this party is, but there were about 50 of us that took advantage of it for the night and we had the entire restaurant space (two rooms inside and the outside patio) to enjoy. Within a couple minutes, we had plates of food and grabbed a seat to chow down.

I know that Tony’s gets a bad rap sometimes for being on par with Olive Garden, but the food for the evening was surprisingly good. My daughter got her money’s worth in calamari rings alone. The meatballs tasted more of meat than filler, and the pastries were crisp and hot. My husband’s favorite was the Boursin-stuffed artichokes, a great way to have something akin to artichoke dip in an easier-to-eat form (or as he said, jalapeno poppers for people who aren’t into spicy). I really enjoyed the smoked chicken pastries with a very creamy filling. It was easy for us to make a decent dinner from that station alone.

My husband and I are not big drinkers, and so the selection of beer and wine was largely lost on us. It is all-you-care-to-drink, and the people around me that were wine drinkers mentioned that the selection was “surprisingly good”. There were also sodas and water, plus a hot chocolate station that had something they called “Washington Hot Cider.” It sounded good, so I asked for that. The woman pouring the drink said “Just so you know, it has alcohol….” Works for me! The hot cider was served with whipped cream and some sort of green fruit garnish that got instantly lost in the whipped cream (maybe a lime or an apple slice?). It was cider. It was hot. And it did a great job as an adult beverage for an occasional drinker like me.

We were able to finish what I like to call “round one” of the party in about 20 minutes, and then decided to walk out for the fireworks. There are no reserved viewing spots for the fireworks, so we took a spot in the middle of Main Street. You don’t get to fully experience the perimeter fireworks from there as you would closer to the castle, but the view was great. Once the fireworks were finished, we took a leisurely walk back to Tony’s to grab some more food and drink and watch the massive crowds exiting the park. (Seriously, what’s the deal with that? Why leave at 10:30?) Our next stop was the antipasto station. The station contained a selection of cured meats, pickles, breads, and about a half dozen varieties of cheeses. I’ve been to snack/dessert parties where you can watch the food disappearing throughout the evening, but for this event, the plates were constantly refreshed. Oh, and speaking of plates, it was honest-to-goodness ceramic plates and metal silverware. No plasticware or flimsy plates here. Cheeses included gorgonzola, parmesan, cheddar, colby-jack, brie, and swiss, and meats were mortadella, capocollo, and salami. This time, we sat outside to watch Tony (yes, the Tony of Tony’s Town Square, of course) move from table to table, making sure everyone was having a good time. No leftovers allowed, he said. And yes, he pulled out his concertina to sing songs for everyone, including the perennial holiday classic Dominick the Donkey, and of course Bella Note. There was also a PhotoPass photographer around to take all the pictures that you could want.

Ten minutes before the parade was set to start, we wandered over to the reserved parade viewing area, located across from the restaurant in the square where the flagpole is located. Several cast members were responsible for making sure that only people with Tony’s wristbands sat in that area, and there was so much space that my daughter was able to dance around before the parade started. The space to our right was completely empty (which led to a lot of people asking why they couldn’t sit in all that empty space). It was absolutely the VIP experience in parade viewing. There’s even a bench in the viewing area, although people who really wanted that bench had taken it about 30 minutes before the parade started. (Curbs are fine by me, especially when we had at least 8 feet of curbside for the three of us, with no one behind us either!) The parade is a wonderful experience, and an absolute must-do for the party. Because our daughter was one of the only kids on the side of the street, many of the characters gave her a lot of personal attention as they moved by.

After the parade, it was back into Tony’s for round three–desserts. If you’ve done typical Disney dessert parties, you’ll know that although the desserts are good, they are produced in large quantities. On the dessert table were bite-size tiramisu, pumpkin tartlets, slices of yule log cake, red velvet cupcakes, and cannoli. Honestly, by the time we got back, after having spent the past couple hours grazing, I was only able to make a half-hearted attempt at finishing one of every dessert. The table favorites were the yule log cake and the tiramisu, but I was also pleasantly surprised that the cannoli were still crisp. (I’ve had too many disappointments with soggy cannoli on buffets!) We decided to wander out after desserts to catch the 11:55 p.m. castle show for a second viewing and then headed out of the park, but the dessert party venue stays open until 12:30 a.m., giving plenty of time to let the crowds clear. Some people were enjoying a glass of wine while sitting on the patio, watching people walk by. This alone is a wonderful benefit.

In the end, this add-on helped improve the quality of the night, giving us refuge from a surprisingly crowded party night for the beginning of November. When you consider that a “normal” dessert party, which provides firework viewing but not parade viewing, is $69, and a meal, some drinks, a snack, and dessert, can easily run over $60 per person (even for a quick-service location), the extra $30 or so per person on either of those options for essentially three hours of access to a VIP lounge plus a “private box” type of experience for the parade isn’t too much of a stretch to make. My only wish is that there had been some veggies and dip to balance out all the fried foods. Aside from that, I can’t think of any way to make this experience better. Because of that, my guess is that if they bring this back next year, expect a higher price point. If you want to experience this, I’d suggest booking this year before the secret gets out. What are your thoughts? Is this worth the splurge, or something you’d skip? Let us know in the comments.