Disneyland Resort is beloved for many reasons, but being a big source of bargains isn’t generally considered one of them. Like the recent Modern Family episode snarked, the Happiest Place on Earth (fairly or not) is synonymous in many TV-watchers’ minds with the “most expensive churros on Earth.”

Sure, most of the Mickey merchandise costs much more in-park than at your local mall, and you can expect a counter service meal to cost about twice what its off-property fast-food equivalent does. But there are actually quite a few freebies to be found around Disneyland, if you only know where to look.

While we can’t teach you how to get in the gates gratis (attempting to catapult from a moving car across I-5 onto the Matterhorn is not recommended), here are a handful of my favorite no-extra-cost niceities available to visitors in the know. Maybe they’ll save you a few cents on snack and souvenirs during your next stop at the resort.

This is the most commonly-known freebie, but it bears repeating. If you are celebrating your birthday, honeymoon, first visit to Disneyland, or just being an “honorary citizen,” stop inside City Hall and ask for a free commemorative button.

There is an ever-changing selection for any occasion, all available at no cost. If you’re wearing one, you’ll get warm greetings from cast members, and maybe even a “magical” moment or two. Collect them all!

When winding through Pacific Wharf at Disney California Adventure on your way past Cars Land, be sure to visit the Boudin Bakery Tour for a savory sample of hearty sourdough bread. The tasting, though small, is mouth-wateringly redolent of the unique yeast the Boudin family have been cultivating for generations.

Ok, the bread making history hosted by Rosie O’Donnell and Ryan Stilles is a bit stilted and silly. But the mechanics of the bakery are mesmerizing, and you get a crusty morsel to munch on while you watch. The tortilla factory that was next door formerly dispensed free samples, and we expect the under-construction Ghirardelli chocolate shop that is replacing it to sweetly sustain that status quo when it opens in June. This one isn’t strictly free, because a modest purchase is required, but it’s such a great deal I have to include it. Buy a cup of coffee – regular, decaffinated, or flavor of the day – at the Market House on Disneyland’s Main Street U.S.A. and hold on to your receipt. Show it at the same location later and you’ll get a free fresh cup of joe!

You can get as many complimentary refills as you want in the same operating day (a real boon to those who attended the Leap Day all-nighter) and you don’t even have to reuse your cup. It doesn’t hurt that the Market House brews the best cup of coffee at Disneyland (I personally prefer it to the ballyhooed but often burnt-tasting Starbucks) and charges under $3 for it. 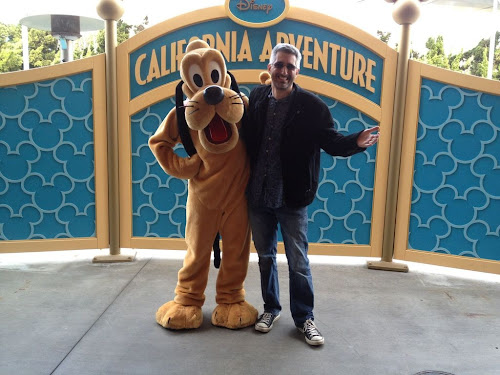 This freebie requires a little advance legwork, but features a valuable potential payoff. As you stroll through Downtown Disney, you’ll notice kiosks offering Disney Visa cards. As long as your credit is solid, stop for a moment and check out their current offers. Often you can get a new card approved on the spot with little more than your drivers license. Make sure the terms you select feature no annual fee; you may also be offered a gift card valid at Disney-owned shops and restaurants.

The card’s high interest rate might make it unattractive for everyday purchases, but it comes with one great built-in bonus feature. Flash it at the private cardholder meet & greet held daily before noon in DCA’s Hollywood Land backlot, and you’ll be escorted to an exclusive encounter with a couple of costumed characters. Better yet, you’ll receive a voucher valid for a free 5×7 Photopass print. It isn’t only valid for the photo from your Visa VIP visit; you can actually redeem it for any image on your Photopass of a Disney character (on-ride photos excluded). Each cardholder is eligible to get one voucher worth about $10 each day; over the course of a vacation, the value can quickly add up! 1. Art of the Craft Tour

Disneyland offers a variety of guided tours around their attractions, but all cost a pretty penny on top of already-pricey park admission. But did you know that you can take an in-depth tour of on of the resort’s architectural jewels, and it won’t cost you a dime?

The Grand Californian Hotel is nearly as spectacular as as its Orlando siblings (WDW’s Wilderness Lodge and Animal Kingdom Lodge) and has just as intricate a backstory. Several times each week, a walking tour of the property is offered that probes the exquisite artistry that went into building this inspiring edifice. You don’t need to be a hotel guest or have a park ticket to take the tour, but you do need to make advance reservations through the hotel guest services desk. This is one of my favorite unheralded experiences at Disneyland, and I hope bring you a more extensive blog on this excursion in the future.

What did we miss? Put your picks for the top free things at Disneyland Resort in the comments below!