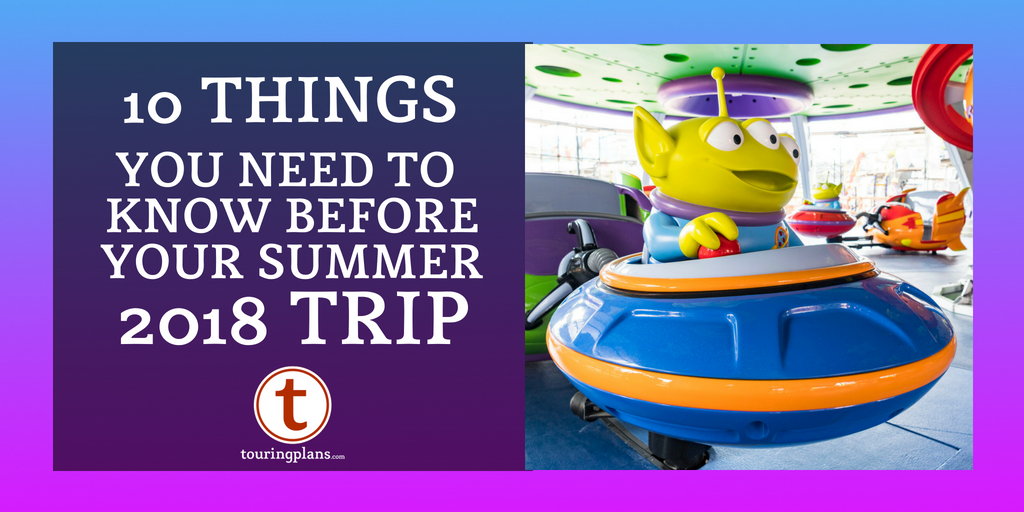 When it comes to summer travel, you take the good (longer park hours, fewer attractions down for refurbishment) with the bad (heat, frequent storms, and crowds). A big part of managing a summer trip is understanding those factors and targeting mornings and evenings for your park touring, leaving the heat of midday for an afternoon break.

In past blog posts, I’ve offered up packing tips for summer and more general tips for surviving a summer trip to Walt Disney World. If this is your first time taking a summer trip, the advice in those posts should help. Beyond those basics, a number of changes this year at the Walt Disney World resort will impact your vacation. There are new attractions and events you’ll want to work into your plans and expenses you may need to factor into your budget.

Here are the 10 things you should know before you travel to Walt Disney World this summer.

That’s the time and date for the grand opening of Toy Story Land in Disney’s Hollywood Studios. Unlike Pandora: The World of Avatar, which opened in time for Memorial Day last year, this new land will miss early summer travelers. Look at this date as a bit of dividing line, with June guests getting the short end of the stick. In fact, from June 11-18, Toy Story Midway Mania will be closed to guests as construction continues on the new entrance and queue. If you’re an annual passholder or DVC member hoping for a chance to preview the land in June, no announcements have been made regarding previews.

During July and August, you can expect heavy crowds at Disney’s Hollywood Studios, even with expanded park hours. On-site guests will want to take advantage of the daily morning Extra Magic Hours from 7-8 a.m. and Friday evening Extra Magic Hours from 10:30 p.m. to 12:30 a.m. in July and August. Those ultra-early hours in particular give you the best opportunity to enjoy the new land before crowds build. If you have Park Hoppers, you could conceivably visit the Studios, do two or three attractions, then head over to another park with a 9 a.m. opening.

With the arrival of Toy Story Land comes a new lineup for the top tier of FastPasses. The top tier is made up of the three attractions in the land: Toy Story Midway Mania, Slinky Dog Dash, and Alien Swirling Saucers. You can only choose one of these attractions for your initial three FastPass+ selections. The good news is that the rest of the attractions, including Rock ‘n’ Roller Coaster, can be booked without tiering implications.

In booking the new attractions, Slinky Dog Dash is the toughest FastPass to get. If that attraction is a priority, and you’re only going to be in the Studios for one day, make it during the latter part of your trip. It will be easier to snag that FastPass (remember, onsite guests can reserve 60 days in advance plus the length of stay). The focus on the new attractions could open up some availability for Toy Story Midway Mania, though we’ll have to wait for June 30 to put that theory to the test.

Taking a look at the Touring Plans Crowd Calendar, there are some unexpected numbers. You’ll see more 6s and 7s than 8s and 9s. Over the length of June, July, and August, the average crowd level is 6.6 on a scale of 1-10, with 10 being most crowded. And 17 of those days rate at 5 or less.

This could be the last summer in a while that we see these crowd levels. Even with the draw of Toy Story Land, we’re still in the “pre-Star Wars Land” era. If construction crews manage to put the final touches on the Millennium Falcon in time for summer 2019, you can expect a surge of visitors that will be sustained right into the 50th anniversary of Walt Disney World in 2021.

While overall wait times may go down accordingly, don’t expect that to be the case at Pandora: The World of Avatar, where the attractions continue to sustain longer waits.

4. Parking is going to cost how much?

If you booked your Disney resort stay on March 21 or later and will be driving or renting a car, don’t forget to factor in the new resort parking fees into your budget. Disney charges $13 a night at value resorts, $19 a night at moderates, and $24 a night at deluxe and deluxe villa resorts.

This is another hunch, but I’m guessing that with these fees, fewer guests will opt to rent a car. Consider a weekly car rental of about $200. If you’re staying at a moderate resort, you can add another $133 to pay for a week of parking, or a 66 percent increase in your transportation costs. The added expense could tilt guests toward Disney transportation supplemented with ride sharing services when needed.

If you must have your own car, you could benefit with some rental deals if more visitors do indeed skip the rental. Plus, it might be a bit easier to find a parking space at your resort.

One of the advantages of visiting in the summer is the extended park hours. Added to that are a couple of additional late-night events that Disney has put into the summer mix.

Disney H2O Glow Nights will take place at Typhoon Lagoon on Thursdays and Saturdays from June 21 to August 11. The beach party will feature Toy Story characters, special lighting effects, and all your usual water park attractions. This separate ticketed event goes from 8-11 p.m. and costs $55 for adults and $50 for children ages 3-9 (plus tax). It’s slightly lower than the cost for a regular water park ticket. It’s a good option if you only want to spend a few hours in the water park. You get some extras and you don’t have to worry about getting sunburned.

Disney After Hours dates have also been added for the summer, starting June 28 and going to September 20. This ticketed event at Magic Kingdom limits the number of guests who can attend, which means little or no wait at the attractions that are open. Advanced purchase price is $119 plus tax. The day-of price is $124 plus tax. The event goes from 10 p.m. to 1 a.m., but your ticket will get you admission to the Magic Kingdom as early as 7 p.m., for six hours of fun. It’s definitely an option if you want to do this event in place of an additional day on your park tickets.

Disney is putting on the full press for the Pixar film Incredibles 2, which is released in theaters on June 15. The “Incredible Summer” theme is being promoted throughout the parks.

If you want to see the Incredibles characters, you’ll want to carve out some time to visit Tomorrowland in the Magic Kingdom. There, you can interact with Mr. Incredible, Frozone, Mrs. Incredible and, for the first time, Edna Mode. They’ll be part of the show and dance party at the Rocket Tower Stage, billed as the Super Party Time stage show. If you’re hoping for an official meet and greet with autographs, it doesn’t sound like that will be in the cards.

Meanwhile, in Animal Kingdom, Donald Duck will host a celebration in Dinoland, U.S.A. with Scrooge McDuck, Launchpad McQuack, and others. The concept is that Donald just discovered ducks are descendants of dinosaurs. So obviously, it’s reason to throw a nightly dance party.

Last year, without much fanfare, Disney did away with the annual Sounds Like Summer series that brought cover bands to the American Gardens Theatre in Epcot’s World Showcase. I must admit missing the series. There were a couple of years where, by chance, I happened to be there when 2U, the U2 cover band was playing. They were great fun.

This year, Disney brings a replacement to Epcot, “Guardians of the Galaxy – Awesome Mix Live!” They’re being a bit cagey about what exactly this show will be, though it’s being billed as a concert series featuring Star-Lord and Gamora from Guardians of the Galaxy. We know that the shows will feature songs from Star-Lord’s Awesome Mixtapes. So if you enjoyed the movie soundtracks, you’ll probably enjoy the show, which will happen five times a day from June 9 to August 19.

8. Still with the construction

Major construction projects continue as Disney looks to add hotel rooms, transportation options, and attractions ahead of its 50th anniversary.

At the resorts, the biggest mess continues to be at Disney’s Caribbean Beach Resort, where the re-imagining of Old Port Royale into Centertown is expected to drag well into the summer, possibly not being completed until fall. Additional work continues on the new Riviera DVC resort and the Skyliner. Speaking of the Skyliner, infrastructure is going up in multiple locations that will be served by the gondola system, including Epcot and Disney’s Hollywood Studios parks, and Pop Century, Art of Animation, Caribbean Beach, and Riviera resorts.

Construction also continues at Disney’s Coronado Springs Resort. Though not as disruptive as the work at Caribbean Beach, guests will notice construction on the 15-story tower at the resort.

Near the Magic Kingdom is the construction of the bypass that will allow resort guests to avoid the parking toll plaza.

In the parks, the most noticeable construction is taking place at Star Wars: Galaxy’s Edge in the Studios. Work has also begun on the Guardians of the Galaxy coaster in Epcot’s Future World and the Ratatouille ride in the France Pavilion.

If it’s been a while since you’ve visited Walt Disney World, you’ll find plenty new at Disney Springs. But even if you’re a recent visitor, the additions keep coming.

Terralina Crafted Italian is opening in The Landing area of Disney Springs, in the former Portobello restaurant location. It will serve cuisine inspired by the lake district of Northern Italy. Also in The Landing, Wine Bar George has opened, a 200-seat wine bar with a selection curated by George Miliotes, native Floridian, Disney alum, and master sommelier.

On the West Side, Jaleo, created  by world-renowned Chef José Andrés, will serve Spanish-style tapas. In Town Center, a new Wolfgang Puck Bar & Grill will aim at modernizing the traditional bar and grill.

The latest store to open in Disney Springs is DisneyStyle, featuring apparel and accessories inspired by Disney characters and attractions.

All these offerings are a plus for those staying at the nearby Disney Springs Area Resorts, which now include Extra Magic Hours and 60-day FastPass+ booking windows for guests.

Summer crowds really drop off from late August when most schools are back in session through early September. But here’s another reason to aim for a late-summer trip: You can get a jump on the fall events. The first Mickey’s Not So Scary Halloween Party of the season is on August 17, and Epcot’s International Food and Wine Festival kicks off on August 30.

In fact, if I had to pick one ideal day to visit Walt Disney World this summer, it would be August 31 – it rates as a 3 out of 10 on the Touring Plans Crowd Calendar, it’s the second day of Food and Wine, and there’s a Halloween party at the Magic Kingdom to boot.

Are you planning a summer trip? If so, what are you looking forward to the most? Let us know in the comments.