Last week I saw an advertisement in the Disney Hollywood Studios times guide for some limited time lunch offerings at The Hollywood Brown Derby, so I decided to invite my friends Mark and Kendra along to a brunch this past Sunday. I tried going the week before, but the waiter informed me the chef refused to serve me off the lunch menu because it was 5 o’clock (lunch hours are 11:30 to 3:00) and he had already packed up the prep work for lunch. Okay, whatever. More on that later.

The Signature Lunch Specialties menu, according to the times guide, included old favorites such as the noodle bowl and famous Cobb salad and three new items: A tuna Niçoise salad, a waygu beef burger with house-made fries, and an open-faced crab sandwich. You could also order off of the regular full Brown Derby menu.

Kendra and Mark decided to take the less adventurous route and ordered the burger. I felt it wouldn’t be much of a review if we all ordered the same thing, so I reluctantly but excitedly picked the crab sandwich. I don’t eat a lot of seafood outside of shrimp, but I wasn’t mad because I’ve loved the Brown Derby’s track record of crab dishes. They used to offer this delicious crab cakes appetizer that I would always order an entree portion of on my birthday because it was my favorite. Then they changed it on the menu to be crab spring rolls, and while it was different and a smaller portion of food, it was still the same ingredients, flavors, and sauces I knew and loved. So I was interested to try this new meal.

My companions ordered Cobb salads for appetizers, Kendra asking for mozzarella cheese instead of bleu, and I ordered my entree as-is but with an additional side of the fries. I figured if the Brown Derby is making homemade fries, they’ve got to be good, right? The waiter (different person than my previous encounter) nervously said he’d have to ask the chef if those requests were okay.

Alright, the self-proclaimed chef inside me has to vent for a moment. I GET IT, when I show up two hours late and want to order off the special menu and you don’t have the ingredients prepped. Personally, I would think you would have a little bit left over to make just one single burger, and really- it’s just grilled ground beef with a slice of cheese on a bun. But I GET IT. But Disney is known for going out of its way to meet dietary needs and preferences. But your staff is afraid you won’t replace a simple cheese with another you already have in your kitchen, let alone let me pay you for more food??

Luckily, the cook  granted our requests. The Cobb salads came, and they were delicious, as always. I’m not really a salad eater – if I ever am forced to get a salad with my meal it will be Ceasar with extra croutons. But for some reason the Cobb is an exception to my aversion! The bacon certainly helps, but I like how it’s all chopped together and you get a little bit of everything in each bite. (My grandmother had it once and said it looked like they put the salad through a blender.)

Then we waited, and waited, and waited for our entrees until finally they showed up 45 minutes later. Again, I’m no professional chef, but if you’ve already prepped, all you’re doing is grilling a hamburger and throwing some things in the fryer- it’s not that time consuming. To my surprise when my plate was set down, there were three crabs each about the size of my hand staring back at me. Now, I would consider myself a semi-adventurous eater, but like many others I have a problem with eating foods that look like the animal they came from. I still bucked up and tried it, though. The breading overpowered the rest of crustacean, and the salad was dry. Overall, I ate about half the dish before pushing my plate away.

Kendra offered me some of her burger, and within the first bite I knew I had made the wrong choice in my meal. The burger was juicy and perfectly cooked. The toppings were a bit much, but, hey, it’s a gourmet burger. They’re supposed to be out there. The Cognac added an interesting flavor but was not to my liking. I don’t drink, but I don’t think that was the problem. Usually you would add something like garlic or lemon to enhance the flavor of the aioli, but the taste of the alcohol was so strong it cleared my sinuses! The burger as a whole, though, was still good. The fries were nothing special, however. There was no seasoning, and I think they were fried twice to give them that crispy crunch, but it sucked out all the flavor and made the potatoes taste old.

Overall, I like the concept of a new Brown Derby lunch menu. If I were to come back, I’d definitely order the burger again with some alterations. My issue is the price. I know the Brown Derby is high end, but for lunch $22 (the burger) and $28 (the crab “sandwich”) is a bit much. A comparable gourmet burger anywhere else on property would cost $13-$17 at most. And as Kendra later pointed out, while the meat and bun are higher quality, you can build the same meal at Art of Animation’s Landscape of Flavors for half the price. Also, if you’re on the Dining Plan, I don’t think this is worth a whopping two whole table service credits.

I have an idea why they priced these specialty lunch entrees so high. They’re offering the lunch menu ($15-$28) at the same time as the all day full menu ($29-$42). It’s already priced lower than the regular menu, and if they gave these sandwiches and salads the price they deserve, nobody would order off the full menu. It’d be a joke.

Like I said before, I think a separate lunch menu is a great idea, but it needs to be just that: SEPARATE. Have only the full menu for dinner and only some lighter fare for lunch. The lighter fare isn’t half bad, either! But maybe offer more of a variety of sandwiches and brunch items that are accessible to the less adventurous eaters.

Brown Derby continues to test the Signature Lunch menu by switching out the dishes. This week, the Niçoise salad is now fettuccine Alfredo with prosciutto brittle, and the open-face crab sandwich is now an open faced chicken breast sandwich crusted in andouille sausage. Both are $17.

What do you think? Is $20+ too much for a lunch entree? Does any of this sound appetizing to you? What lunch item would you like to see the Brown Derby’s take on? Let us know in the comments below! 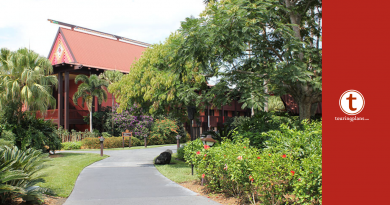 The 10 Steps of Online Check-In for Your Disney Cruise