We all have our favorite stores in the Walt Disney World parks and resorts to get our fill of merchandise. Whether it’s Once Upon a Toy in Downtown Disney, Mouse Gear in Epcot, or the Ink & Paint Shop at the Art of Animation Resort, it’s not that hard finding a gift shop filled to the brim with the latest Disney vinylmation, t-shirts, and plushes. But did you know that there is a place where all the merchandise Disney has a hard time selling ends up? A magical store filled with discount prices and Disney-related items that even Guy Selga wouldn’t touch with a ten foot pole? Ladies and gentlemen, I present to you Orlando’s Disney Outlet Stores: Disney’s Character Warehouse.

Right when you walk through the door you’ll see that assorted merchandise from this year’s Flower & Garden Festival has hit the  outlet. Hats, vases, and magnets are among some of the items available.

One of the prints was this one for Daisy Duck. I knew it was from some sort of famous painting, and Theme Park Insider let me know it was based off of Johannes Vermeer’s Girl with a Pearl Earring. It inspired me to want to do my own high end art print, doing a mashup of Edvard Munch’s The Scream and the Disney Rapid Fill refillable mug program.

Pretend to be a DVC owner with these resort specific shirts for BoardWalk and Old Key West.

Shocked that this churros shirt ended up here. Shocked.

These postcards can be seen in the window of the Cozy Cone display over at Disney’s Art of Animation Resort.

Another item direct from DCA is this Red Car Trolley photo frame. Will we be getting Buena Vista Street merchandise soon? Glow With the Show ears?

A little while ago out in Disneyland the popular Indiana Jones Adventure ride got some new projection mapping effects along with a new voice for Mara. I’m only assuming that new voice is screaming in horror over this hideous vinylmation.

Speaking of vinylmation, Lenny and Wayne from Prep & Landing have arrived. Please keep your Duffy purchases to just five per guest. Think of the rest of us.

Angry Birds Star Wars has a Chewbacca plush in the store, which is sure to make Scarlett Litton very happy.

Had to do a double take seeing Captain EO merch with this Hooter plush.

I actually bought this one, and have wanted to buy it for years from Once Upon a Toy at Downtown Disney, but the price tag was just a little too much. Clearance rate of $11.99? That I can justify.

Merchandise from The Lone Ranger has already hit the outlet and readers of MMM will remember that we had that one right.

Party merchandise is here, including tumblers for the Mad T Party out in Disney California Adventure and small mugs for the defunct Pirate & Princess Party from Magic Kingdom.

Here’s another one I bought. Not long ago Disney released carded figures for the Fab Five. $12.95 is a little pricey, so I’ve only bought Mickey so far, but now I picked up Pluto for the price tag of $6.99.

I was THIS CLOSE to picking up this postcard set. I love the retro style from the artist “Shag,” but $13.99 for a total of 10 postcards? That’s Space Mountain themed kitchen money, not Stitch’s Great Escape themed bathroom money that I got.

There’s even merchandise reduced for people from Golden Oak looking to decorate their house. The Character Warehouse has something for everyone.

That’s it for this month’s trip to the Disney Outlet. See ya soon on the next edition of The Magic, The Memories and Merch!  If you liked what you read here, you may enjoy THE SATURDAY SIX  articles every week on the TouringPlans.com blog, as well as Pardon the Pixie Dust and Universal NOW! on the TouringPlans.com Podcast Network.

(EDIT: There are actually two Disney outlet stores in Orlando. Both are in Orlando Premium Outlet shopping complexes, and they are called Disney’s Character Warehouse, presumably because The Land Of Misfit Toys was already trademarked. There is one Character Warehouse located on International Drive close to Universal Studios (4951 International Dr, Orlando, FL 3281), and the other is on Vineland Avenue, right across I-4 near the exits to Disney World (8200 Vineland Ave, Orlando, FL 32821).

Soarin’ Around The World Headed to Epcot and Disney California Adventure 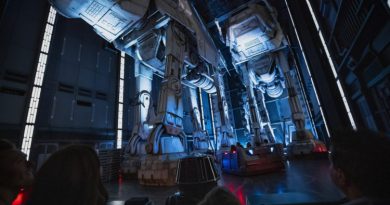 21 thoughts on “The Magic, The Memories, and Merch! August 2013 Photo Report of the Disney Outlet Store”