I went to check out the latest developments at Downtown Disney this past weekend and finally got a chance to stop by Splitsville for lunch. I have heard nothing but positive reviews since it opened in December, 2012, in the former home of the Virgin Megastore, but I often end up taking visiting friends and family to the Rainforest Cafe or T-Rex Cafe because of the theatrical nature of those restaurants. I personally enjoy going to House of Blues, Raglan Road, and Cookes of Dublin when I’m by myself or with friends, so it was high time to check out this relatively new venue.

Splitsville is located on the West Side of Downtown Disney, directly next to the AMC movie theaters. Splitsville is a massive presence at Downtown Disney, and seems even bigger once you walk through the front door. It is two stories high, has indoor and outdoor seating on both levels, several bars, a billiards area, and – of course – bowling lanes. Unlike traditional bowling alleys, the 30 lanes at Splitsville are split up into multiple areas on both floors.

There was live music being played outside on the first floor, but it had been a long day walking around Downtown Disney and with the weather being a typical Florida summer day of approximately 100 degrees with 200% humidity, we opted to dine inside with the benefit of air conditioning. Splitsville does allow you to book ADRs, but at 3PM we had no problem walking in and getting a table immediately. They have separate check in areas for those just dining and for those bowling.

There is a lot of color going on at Splitsville, but it actually works quite well and the whole “retro” vibe was fun. Believe it or not, Splitsville is one of the better places to go for sushi in the Orlando theme park world.

If you enjoy people watching, you can get some pretty good views on both the first and second floor outdoor decks. This view on the second floor looks over the AMC theater, Bongo’s Cuban Cafe, the Food Truck Park (coming soon), and various stores such as Candy Cauldron.

Look the other way and you will see the House of Blues and the big tent for Cirque du Soleil: La Nouba. We were seated upstairs next to one of the bars. Like the T-Rex Cafe, Splitsville offers beers in an 18 ounce “frozen schooner.” This goblet is pretty impressive and definitely keeps the beer cold. The schooner that we ordered with Magic Hat #9 was $8.50. There are very few places on Disney property which have Coke Freestyle machines, but two are at Downtown Disney with one of them being Splitsville. For $7.50 you can get a Coke Freestyle refillable cup that includes free refills for the rest of the day. Great price, but it’s unrealistic to expect many people would be coming back to get refills compared to Universal’s Coke Freestyle program at the parks or even Disney’s RapidFill system at the resorts.

We got the crinkle cut french fries for an appetizer. I’m a huge fan of crinkle cut fries, and they just don’t have them at enough places in Disney or Universal. This serving size was gigantic and came with a chive sauce on the side. ($8.00)

We also got a side of steamed edamame ($6.00.) They were good, but nowhere near the level of edamame available at Tchoup Chop at the Royal Pacific Resort. While there is not an overwhelming amount of selections for vegetarians on the menu, there is definitely more than just getting a salad. The menu also had 15 gluten free options. (Click HERE to see the Splitsville menu)

There are a lot of options for entrees, and one of our choices was the pizza. The pizzas are about 12″ and are a good size for two people to share. Hands down this is the second best tasting pizza on Disney property, right behind Via Napoli. There are not many good places for pizza inside WDW, but this is one of them. The pepperoni pizza was $15.00. Highly recommended and a solid value on property.

While you definitely hear the bowling going on throughout Splitsville, I didn’t consider the sound to be overwhelming. There are also a whole bunch of TVs throughout the restaurant playing the latest sporting events, making Splitsville a great place to come and watch NFL games or soccer matches. Throughout Splitsville there are posters on the wall playing into the theme of a bygone era when bowling had much more of an impact on American culture. When I was growing up in New Hampshire, we had bowling on TV all weekend, both national and local coverage. Now many of the bowling alleys are closed and you rarely see bowling on TV unless ESPN 2 is carrying an event. Its good to see that with Splitsville and the new Cabana Bay Beach Resort at Universal that bowling is making a small comeback in Orlando. Bowling is a rare game that you can enjoy with pretty much anyone regardless of age or gender. It’s also the only “sport” in which you are encouraged to eat and drink alcohol while participating in. That alone gets a thumbs up in my book. When soccer starts to allow churros while playing I may finally get on the pitch, but until then I’ll stick to the alleys. OVERALL THOUGHTS:  The menu is large, and I’m looking forward into exploring more of it after the quality of the items on this visit. In fact, as someone who has written several articles on the Outrageous Foods of Disney and Universal (which you can read here, here, and here) I’m intrigued by The Mad King (a 21 ounce, triple decker burger) and the Giant Cake on the desert menu. Size matters. The decor of Splitsville is fantastic and the amount of TVs in the restaurant surprised me. As a sports fan I have found it difficult to follow big events while on Disney property but now I have another choice. You will definitely notice the bowling sounds if just dining, but between the live music downstairs or the music being pumped through the restaurant, I didn’t find the actual bowling distracting at all. A good value for Disney restaurants and the ability to do walk-ins without a huge wait is huge plus. Splitsville has immediately moved to the top of my list for dining choices at Downtown Disney.

All photos in this article courtesy of Brandon Glover. 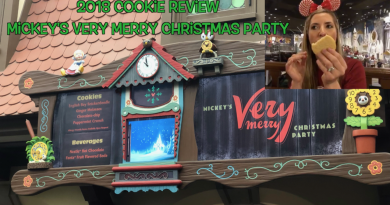 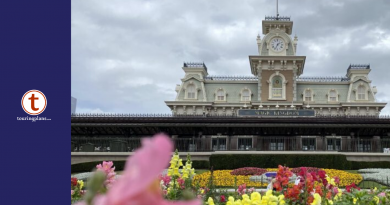