This week’s SATURDAY SIX takes a look at the Top Six Reasons to Visit Downtown Disney in its Current State. There is a lot of construction going on right now at Downtown Disney as the area is being converted over to Disney Springs. “A lot” may actually be an understatement, as there is work being done in every single area of Downtown Disney: the parking lots, West Side, Pleasure Island, and the Marketplace. Parking can be – at best – inconvenient and – at worst – something that can trigger even the most peaceful person to go “Michael Douglas in Falling Down.” Construction walls are everywhere. However, there are still some very good reasons to overcome these obstacles and spend a day or evening there, and today we are going to count down the top six.

Raglan Road is an Irish pub and restaurant located in Pleasure Island that ranks among the best dining experiences in all of WDW when it comes to atmosphere. Like almost all the sit down venues in Downtown Disney (DTD), Raglan Road is deceptively large with several areas to eat or drink both inside and outside. Evenings include live Irish music and even Celtic dancers making their way around the main dining room. Food wise the must-trys are the Dalkey Duo appetizer (beer battered sausages served in extremely unique way) and the Bangers & Booze, hands down the best “bangers and mash” plate in Orlando. Be sure to check out Cookes of Dublin located directly next door to Raglan Road for more Irish pub food choices along with the insane Doh-Bar (a Snickers bar deep fried in donut batter.)

Movie theaters have been hit hard by people being able to recreate a decent experience at home with big screen high resolution TVs and surround sound systems, but there is still something to be said about seeing a movie with a crowd. The jokes in comedies seem to be funnier and nothing at home can replicate seeing an action or adventure film on a 30 foot (or taller) screen. I’ve been to several movie theaters across Florida who offer in-theater dining and the AMC Dine-In Fork & Screen at Downtown Disney is the best. First, guests get to pick out their seats ahead of time, which is something I wish I could do in every movie theater. Second, each theater is set up with “tables” seating four guests, with each seat having a button that allows them to discreetly call the server at any time. Third, the menu is actually good. Along with the traditional movie snacks like Popcorn and M&Ms there is a full bar along with appetizers and entrees that rise WAY above the food you would find in any regular movie theater. My personal favorite selections are the parmesan fries and the Margherita pizzetta. Want a refill on your popcorn or soda? No reason to leave your seat and miss part of the movie, just call your server.

The AMC theaters at DTD has 24 screens, but only 6 of them are dedicated to Fork & Screen. If you are taking children, I would recommend just doing the regular side of the theater (entrance by Splitsville), but if you are having a date night or going with friends, a movie theater with a full bar that brings alcohol to you is the way to go. Trust me, watching a movie like Into The Storm is much more enjoyable after a couple mixed drinks…

T-REX Cafe has several faults. The food is not particularly great (in fact this is the only sit down restaurant at DTD where the menu of the AMC Fork & Screen would compare favorably to) and some of the outrageous prices are going to make your vacation savings go extinct. That said, T-REX is an experience like no other and on a scale of 1 to 10 is an “11” if you are bringing kids. There are several gorgeous aquariums in the bar area, a couple dining areas with giant animatronic dinosaurs, and one “ice cavern” room, which changes colors throughout your meal. Like the Rainforest Cafe and Jimmy Buffett’s Margaritaville in CityWalk, there is a show element in the restaurant where several times per hour a “meteor shower” occurs and the Dinosaurs react all around you. Along with an archeological dig area and a Build-a-Dino plush factory, the entire restaurant is sensory overload for the younger set. Best bets for food include the Paleozoic chicken sandwich and the Chocolate Extinction dessert. Above all, T-REX is an experience, and one you can’t get back at home.

As someone who does monthly photo reports of the Disney Outlet Stores, I see a lot of Disney merchandise and nowhere on property can you see more of it in one place than the World of Disney. Located in the Marketplace, World of Disney has 12 separate rooms filled with pretty much every type of Disney related merchandise you can imagine. Pins, DVDs, luggage, shirts, dolls, Mickey ears, kitchen utensils…. you name it and this store has it. The World of Disney has the Bibbidi Bobbidi Boutique along with a very cool “magic mirror” in which little girls can see themselves dressed up as various Disney princesses. Automobile accessories (including Dole Whip and Turkey Leg air fresheners,) Vinylmation, and pretty much every Disney plush you can imagine. Browsing World of Disney is a blast.

Here’s a tip if you are bringing a princess to DTD. At 2PM every day there is a “Pretty Princes Parade” that starts at the World of Disney and works its way through the Marketplace ending at the Carousel. Many children from the Bibbidi Bobbidi Boutique will be a part of this, but Disney encourages all small children to join in. This is free and at the end of the parade each child gets a free ride on the Carousel.

I was a huge fan of the old Virgin Megastore in DTD. A giant building selling nothing but music CDs, DVDs, magazines and books. I was crushed when it closed, but looking back I’m surprised it lasted as long as it did. Even I had a hard time justifying some of the prices they charged and mostly used my time there as a way to discover new things and then go buy it elsewhere for a more reasonable price. The temporary replacements for the store included Ridemakerz (an entire store dedicated to radio controlled cars) and a Princess Diana exhibit you had to pay to walk through (I swear I’m not making that one up.) It seemed unimaginable that someone could come in and take over the giant footprint of the Virgin Megastore and make something as cool, but lo and behold at the end of 2012 Splitsville came to DTD.

A fresh take on the bowling experience, Splitsville has 30 lanes but separates them into small groups on both the first and second floors. The venue has five full bars, a sushi bar, and a ton of indoor and outdoor seating with a menu that has something for pretty much everyone. Vegans and vegetarians are probably better off eating the actual menu at T-REX, but there there are several options for them and others with dietary restrictions like Gluten-free. The pizza is the second best on Disney property behind Via Napoli and the sushi is among the best around as well. Who would think a bowling alley would have good sushi? Live music, tons of TVs, Coke Freestyle machines…as Stan Lee would say, Not a hoax! Not an imaginary story! This one truly has it all!

If you want to see more of Splitsville, check out: Disney Dining: Splitsville at Downtown Disney.

Oh Marketplace Co-Op, where have you been all my life?! The newest addition to Downtown Disney is also the best as the Co-0p has some of the coolest Disney merchandise you will find anywhere. The Co-op is a large building that has several smaller stores inside. These include: Beautifully Disney (beauty accessories), Cherry Tree Lane (women’s scarves, bags, jewelry), D-Tech on Demand (personalized phone cases), The Trophy Room (sports apparel and collectibles), Zoey and Pickles (various items for young women and tweens) and Disney Centerpiece (featuring Disney parks inspired merchandise, a/k/a THE GREATEST DISNEY STORE OF ALL TIME.) You can shop around the entire area and purchase all your items at one store when you are finished. Each store has their own registers and Cast Members, but the whole area feels wide open and welcoming.

The home decor items in Disney Centerpiece brought back a lot of wonderful Disney memories. There were products featuring Mr. Toad’s Wild Ride, the Jungle Cruise, and the Haunted Mansion. There were incredible reproductions of signage including one for the Enchanted Tiki Room that I wanted to buy immediately and place in my man cave and another one for Mama Melrose’s Ristorante Italiano which made me appreciate that Disney wasn’t forgetting the clearly insane demographic.

On my most recent visit there was a selection of items from Anaheim’s Downtown Disney WonderGround Gallery. There were art prints and related merchandise with stunning pieces from several artists, including one of my all time favorites, J Scott Campbell. I absolutely love walking through the Marketplace Co-Op and the area is billed as a “testing ground” for new Disney stores and products, so here’s to seeing more of this around “the World.”

Some of the items of the Marketplace Co-Op are available online, which you can check out by clicking HERE.

Like the Blue Man Group in Universal’s CityWalk, La Nouba is a show that is impossible to compare to anything else, and you should go into both spectacles knowing as little as possible. Despite the high ticket price, the various performers of La Nouba are going to have you picking your jaw up off the floor watching them perform their artistry. Acrobats, gymnasts, bicyclists, and even jump ropers perform elaborate acts that are just stunning to watch unfold before your eyes. I have seen La Nouba on several occasions over the years and each time the same act on the show ends up taking my breath away. It is different performers each time, but there are four young girls who come out, each holding two sticks with a long line of string connecting them.They each manipulate the sticks and string to toss up diabolos. The girls run, jump, and flip around the stage all while tossing up diabolos and making sure they never hit the ground. It’s amazing to watch. If you’ve never gone to La Nouba, see it. While it has had very few changes in over 15 years, eventually the show is going to have to be overhauled and you’ll miss out.

There is one other thing that I can highly recommend at Downtown Disney but was ruled ineligible for this list, the extremely popular Earl of Sandwich. A great place that you should definitely go out of your way to try if on Disney property, Earl didn’t make the cut because there are several locations in Florida, including one in a turnpike rest area close by to Orlando. Splitsville has two other locations in Florida (Miami and Tampa) but they are nothing like the DTD version.

So there you have it: the Top Six Reasons to Visit Downtown Disney in its Current State. See you next weekend for the latest edition of the SATURDAY SIX, where we are going to head back over to Universal. If you had fun, be sure to check out The Magic, The Memories, and Merch! articles, or, for your listening pleasure, check out Pardon the Pixie Dust podcast.

Special thanks to Mike Sperduto and crack staff photographer Brandon Glover for their invaluable assistance in this article. 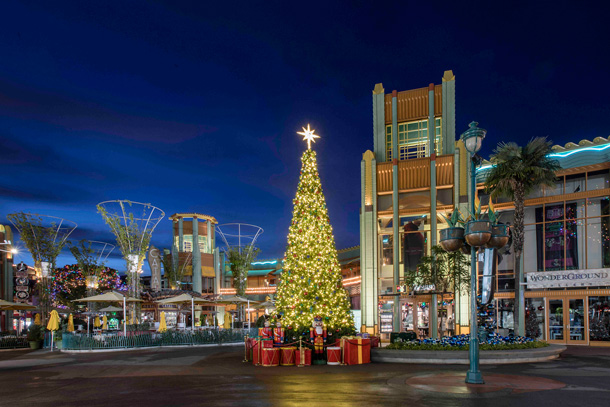