Edit 9/10/14:  Well, it’s the day after this was supposed to have launched and nary a peep from Disney. In fact, the special website that I was previously able to access that included a video of how the game worked has been re-linked to the Mickey’s Not-So-Scary Halloween Party page. Not sure what caused Disney to pull this game, but it doesn’t look like it’s going to be a part of this year’s Mickey’s Not-So-Scary Halloween parties now.

Edit 9/3/14 4:30 p.m.: Odd…while I have the game app from the Apple Store, which I downloaded onto my iPad a few days ago, I cannot find it anymore in the Apple App Store. Also, more curious is that it seems that the Disney Parks Blog post about this is missing now too. Not sure if a re-launch is going to take place on September 9, the first party the app was slated to be active or if it has been pulled all-together. The experience was noted on the map for Mickey’s Not-So-Scary Halloween Party.

Disney has recently been getting in on the augmented reality fun. Lately, it has popped up during both Star Wars Weekends and during the Frozen Summer Fun event. For the Halloween season, Disney has created a free app for use during Mickey’s Not-So-Scary Halloween Party.

The app is called Mayhem at the Mansion. The story behind the app is that The Haunted Mansion’s Hitchhiking Ghosts have escaped and are causing mayhem at the Magic Kingdom during the party.  Your goal is to use the “Specter Collector,” found inside the app, to take photos of the ghosts, and return them to The Haunted Mansion. Guests can find the location of the ghosts by aiming the “Specter Collector” at a park map.

Once all three ghosts have been collected and returned, you will be able to unlock exclusive Mayhem rewards.

I recently downloaded it and started playing with it. The app is very simple.  There is an introduction video, an link to purchase Mickey’s Not-So-Scary Halloween Party via Disney’s website, a video explaining how the process of collecting works, and the “Specter Collector” camera. I am not sure if more will be updated once the app officially is unveiled for park use on September 9, but the basics are already there.

The game doesn’t seem as though it will be intrusive and seems like it is geared towards families with little ones. It should be a fun addition to the party for those who choose to play. 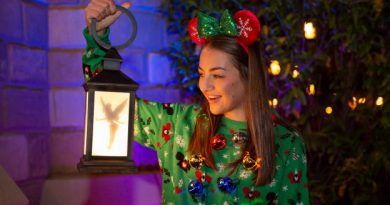