This week’s SATURDAY SIX takes a look at Six Reasons We Love Disney’s Port Orleans Resort – French Quarter. Regular readers of the Saturday Six know how much we enjoy staying onsite at the Universal Orlando Resort and Walt Disney World, and while Disney is challenged to compete with some the amenities that Universal can offer its guests, where it does shine is the overall amount and unique hotels on property. Universal has a total of four onsite hotels (soon to be five with the opening of Sapphire Falls in 2016) while Disney has five value resorts alone, not to mention all the moderate, deluxe, and DVC resorts on property. Today we are going to look at our absolute favorite moderate: Port Orleans Resort – French Quarter.

Disney’s Port Orleans is broken up into two sections: French Quarter, and Riverside, the latter of which is the much larger of the two resorts. While Riverside certainly has its fans (in fact we’d probably consider it our extremely close second favorite moderate,) we prefer Port Orleans (POFQ) and here are six reason why, starting with…

French Quarter doesn’t have a table service restaurant (although Riverside’s Boatwright’s Dining Hall is a short walk away,) but it does have a fantastic counter service with the Sassagoula Float Works. Set up like a mall food court, there are several different stations offering Louisiana-inspired dishes such as Po’Boys, Jambalaya, Gumbo, and Beignets. For lunch you can not go wrong with one of the various Po’Boys (our favorites were the pork and beef versions) along with a side of bean salad or house-made chips. As we wrote about in our review of the Fantasy Fare food truck, Disney makes surprisingly good chips. For dinner you gotta go with the Jambalaya or Pot Roast, and any time of the day is good for an order of beignets. Made fresh-to-order and covered in powdered sugar, these beignets are one of the best treats at WDW.

I’ll be upfront and say I am not the biggest fan of Disney’s bus transportation. In fact, one of my biggest tips for people traveling down to WDW is to rent a car, even if they are staying onsite. However, I am in love with just about every other form of Disney transportation including the friendship boats at Epcot, the monorail, and the Walt Disney World Railroad at Magic Kingdom. Another relaxing boat ride at WDW is the complimentary ferryboat from French Quarter to Downtown Disney.  While the Downtown Disney area is still under construction, there are still a lot of great reasons to go there. Bowling (or a meal) at Splitsville, drinks at Raglan Road, and shopping at the World of Disney store or the Marketplace Co-op, are just some of the highlights of the area. For most, the biggest problem with Downtown Disney is the parking situation, but if you’re at French Quarter, you can take a boat! Problem solved. Since TouringPlans’ own Brian McNichols literally wrote the book on WDW’s bars and lounges, and we recently completed a series covering the  Top 25 Drinks at the theme park resorts, it’s fair to say we enjoy libations during our vacations. With live music and a tremendous beer selection, Scat Cat’s Club is a nice way to spend a part of your evening. What we especially enjoy is to look at the jazz memorabilia lining the walls. It was actually taking the incredible tour at Universal’s Hard Rock Cafe that the Saturday Six staff took a deeper appreciation for the history of American music, so it was fascinating to go from piece to piece adorning the walls.

While several Disney moderate rooms seem to be on the bland side, French Quarter continues its wonderful resort-wide theming straight into the rooms themselves. The gorgeous cherry headboards and Mardi Gras-pastel bedspreads are what will first draw your eyes when attention when stepping into the room, but its the small details throughout – such as the two sinks and mirrors in the bathroom allowing multiple people to get ready at once – which make the rooms stand out.

Traveling with children, we find the pool experience starts to become a bigger factor in determining how much we enjoyed a particular resort. The Doubloon Lagoon, and its surrounding area, is among the best Disney has to offer in any of the 20+ resorts on property. The walkway leading up to the pool has colorful gators right up front, as well as a dedicated playground for children 2-12 years old. There is a hot tub and pool side bar (Mardi Grogs) for the adults, but what the kids are going to love is the Doubloon Lagoon pool itself, filled with unique characters, water spraying features, and – more importantly – a slide.

# 1 – The Intimate Feel of the Resort

While French Quarter is far from a boutique hotel, it offers a much more intimate experience than many of WDW’s sprawling resorts, including it’s neighbor Riverside. We’ve often found ourselves walking around the wonderfully themed property with barely a soul in sight, making the experience that much more special. The landscaping takes you completely out of central Florida, and that combined with the old fashioned iron lampposts and wrought-iron filigree around the buildings makes you feel like you are in New Orleans, something which a resort like Saratoga Springs just does not accomplish on anywhere near a level of success. While the entire resort is beautiful, the bursts of Mardi Gras colors in specific areas (such as Doubloon Lagoon and the Sassagoula Float Works) really pop thanks to the understated nature of everything else.  If you are used to staying at a value resort on Disney property and are considering making the jump to a hotel with more amenities, take a chance on French Quarter, we promise you won’t regret it.

Come on, Mickey as the trumpet player leading the band? Donald Duck with the trombone? Only the missing POFQ logo keeps these from being an A+ pressed penny selection.

Kudos to the entire staff at French Quarter, as we have had tremendous experiences with Cast Members across the boards (check-in, Float Works, Mousekeeping,) but a highlight of every trip is seeing the colorfully dressed doorman, who always seems to be a great spirits. The doormen for French Quarter and Disney’s Grand Floridan seem to evoke a different time and place, and seeing them brings a smile to our face each and every time. So there you have it: Six Reasons We Love Port Orleans French Quarter. See you next weekend for the latest installment of the SATURDAY SIX, where we’ll look at something fun from the world of Disney and Universal. If you had fun, be sure to check out The Magic, The Memories, and Merch! articles, or, for your listening pleasure, check out the Pardon the Pixie Dust podcast.

If you enjoyed Six Reasons We Love Port Orleans French Quarter, you may also enjoy:

Special thanks to crack staff photographer Brandon Glover, Parkscope‘s Nick Exley, and Megan Stump for their invaluable assistance with this article. Be sure to also check out Brandon on The Park Blogger podcast with co-hosts Aengus Mackenzie and Brian Carey. 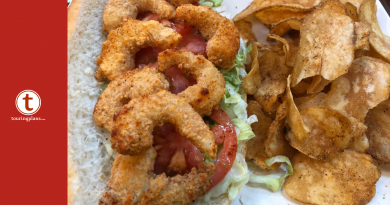