In addition to four theme parks, the Walt Disney World Resort also offers two water parks: Typhoon Lagoon and Blizzard Beach. Both of these water parks boast unique themes and, in true Disney fashion, a great story! Typhoon Lagoon, the older of the two parks, is meant to be a little tropical resort that was drenched and tossed by a typhoon which created pools, tossed items onto rooftops and into trees, and left the Miss Tilly boat perched atop Mount Mayday! This park is a windblown paradise with little gags wherever you turn; and it’s also home to some popular ways to get wet, such as the thrilling Humunga Kowabunga slides, the relaxing Castaway Creek, the iconic Surf Pool, and the Crush n’ Gusher water coaster. If you’re considering a visit to this popular water park, check out these Disney Savvy Tips for Typhoon Lagoon to make your day as magical as possible.

But wait! There are a few things you should know first before planning a trip to Typhoon Lagoon. First of all, Disney is now offering a 1-Day Water Park Pass which provides one-day admission to either Typhoon Lagoon or Blizzard Beach for $61.77 with tax for ages 10 and up or $53.25 for ages 3-9 with tax. This now means you can water park hop for a day! You can also purchase a Water Parks Annual Pass with unlimited admission to both water parks for $117.15 with tax for adults, or $105.44 with tax for kids ages 3-9. But if you have a Premium Annual Passport, you already have the privilege of unlimited admission to both parks.

So are you ready for some Disney Savvy tips?

12. Three Experiences at Crush n’ Gusher – The story behind Typhoon Lagoon’s water coaster is that before the typhoon, it was once a fruit processing plant which handled pineapples, coconuts, and bananas. This means that there are three different “chutes” to ride and therefore three ways to experience Crush n’ Gusher! The Pineapple Plunger and Coconut Crusher take up to 3 riders while the Banana Blaster takes up to two. Try them all!

11. The Water is Heated – While this isn’t necessary during the summer months, Typhoon Lagoon is open throughout most of the year, unless its undergoing refurbishment. So if you are visiting during the off-season when the temperatures aren’t as warm, a day at Typhoon Lagoon is still an option for you!

10. Bring Your Own Towels – You can rent towels at Typhoon Lagoon, but you’re looking at $2 per towel. This means that you can’t take your towel with you when you leave, resulting in a soggy, chilly ride back to your resort. So for ultimate comfort and to save some cash, bring your own if you can!

9. Be Strategic For When You Visit – Many guests recommend visiting Typhoon Lagoon first thing in the morning for the empty chairs, ideal spots, and the best locker locations, which I would agree with. In fact, find out where to go at the park with the Best “Spots” in Typhoon Lagoon. Also, lockers are $13 for a small size and $15 for a large with a $5 refundable deposit. However, during the summer months, an afternoon thunderstorm is pretty common and guests are not allowed in the water under such circumstances, particularly when there is lightning. This means guests leave the park; but if you stick around, and the storm passes, you have the chance to experience the pools and slides with less crowds. I know some guests have said that after a storm, the didn’t have to wait in line for a slide for two whole hours! It’s also best to plan your Typhoon Lagoon experience for a weekday as Florida locals tend to fill up the park on the weekends. What I don’t recommend? Going to Typhoon Lagoon during the hottest time of the day.

8. Check out the “Board Room” – Right in front of Typhoon Lagoon’s famous Surf Pool is a leaning clock tower with a shack underneath cleverly named the Board Room. Most guests just walk right by, but restrain yourself from running into the pool for just a minute and look inside! It’s the home of Typhoon Lagoon’s former mascot, Lagoona Gator, and you can see some of his stuff!

7. Splurge on the Sand Pail Sundae – Does swimming make you hungry? Maybe it’s just me, but I’m usually ravenous after a few hours of splashing and sliding; and the best remedy for your empty stomach is Typhoon Lagoon’s Sand Pail Sundae, which is exactly what it sounds like! A Sand Pail Sundae, available at Happy Landings, is chocolate and vanilla ice cream with cookie pieces, hot fudge, sauces, waffle cone pieces, and whipped cream and a cherry for $9.99. Yum!

6. Always Wear Sunglasses, Sunscreen, and Water Shoes – I cannot stress this enough! Sunglasses are a must anywhere at Disney World in my opinion, but especially at the water parks. The sunlight reflecting off the water is almost blinding; and without them, you’re going to be squinting the whole day. With that said, be sure to hold on to them, especially when you’re in the Surf Pool! Sunscreen is also a must for most people at Disney World; but even if you don’t burn easily and skip the lotion at the parks, you want to smother some on at Typhoon Lagoon. I rarely burn, but I was beet red after only two hours at Typhoon Lagoon; and trust me, the last thing you want when on your vacation is pain. I especially encourage parents to put sunscreen on kids and to reapply throughout the day. Lastly, everyone visiting Typhoon Lagoon should invest in a pair of water shoes. The pavement throughout Typhoon Lagoon can get blistering hot and is unbearable if you’re not in the shade! Didn’t bring any of these items with you? Head over to Typhoon Lagoon’s Singapore Sal’s for a little shopping.

5. Keep a Close Eye on Your Kids in the Surf Pool – I absolutely love the Typhoon Lagoon Surf Pool. For me, it’s almost worth the price of admission alone. Why? The Surf Pool is anything but you’re ordinary wave pool as the waves are six feet high! At the foot of Mount Mayday these monstrous waves spring up with a roar and then everyone screams as a white-capped wave comes rolling towards the shallows. It’s thrilling and an absolute blast, but it is intense. After all, Typhoon Lagoon does offer surfing lessons in this pool at designated times which you can read about here. Adults are easily swept off their feet and I’ve collided with people more than once, so you can imagine that this wave pool experience can be a little extreme for children. Fortunately, life guards are stationed around the pool and even in the pool; but still, I would suggest keeping young kids in the shallow end of the pool where the large waves are much more tame. I would also suggest keeping all kids away from the sides of the pool. The waves do get higher near the wall. To know when the six foot waves will appear, check the chalkboard near the Surf Pool entrance. You see, the waves are actually on a schedule. There are designated blocks of time for the large waves and for the gentle, bobbing waves which you normally find at wave pools.

4. Snorkeling Equipment is Free – In addition to one of the coolest wave pools ever, Typhoon Lagoon also has a snorkeling experience known as Shark Reef. Disney has created their own coral reef in the park where guests get the opportunity to swim with stingrays, schools of fish, and bonnethead and leopard sharks. Don’t worry though, they’re small sharks and safety is a priority at Disney. It’s so safe in fact that kids are even allowed to snorkel as long as they can swim across the pool in a life jacket. The water is also different than what you find in the other pools at Typhoon Lagoon. For one, it’s saltwater; and secondly, it’s 68 degrees! That’s a little chilly, but it’s what the fish need. What most guests don’t know is that Shark Reef is not an extra experience, but rather included with the price of park admission and even your snorkeling equipment is free! If this activity isn’t quite your thing, there’s an upside-down freighter in Shark Reef, clearly a victim of the typhoon, which has portholes offering views into the water so that landlubbers can get a glimpse of the sharks and fish too.

3. Bring an Underwater Camera – Few guests come home from Disney World with photos from the water parks as water and phones or digital cameras just  don’t mix; but that means you’re missing out on capturing some great memories and candid moments, as well as the beautiful scenery of Typhoon Lagoon. This is why I always suggest that guests buy an underwater camera. I would buy them ahead of time, as they probably are cheaper outside of Disney World; but if you forget, they are usually available at one of the Typhoon Lagoon shops. Trust me, you’re going to want to capture your family’s expressions as one of the Surf Pool waves comes towards them! Lilo and Stitch have also been known to make appearances in the park, and you will want a camera of your own handy for that.

2. Know What Not to Bring – Alcohol and glass containers are not allowed at Typhoon Lagoon, and neither are pool toys. This may be disappointing to your kids; but believe me, hundreds of pool noodles and broken plastic toys throughout the park is anything but magical. However, you can bring your own life jacket for your little ones. Finally, be smart with what swimsuit you choose to bring. Suits with exposed metal are usually not permitted on slides.

1. Drive Yourself if You Can – I often stay at a Disney World Resort during my vacations and rely upon their free bus transportation when traveling from park to park; and while I recommend using Disney transportation most of the time, I do not when it comes to traveling to and from the water parks. Typically, although this probably will change as Disney Springs continues to take shape, the Typhoon Lagoon buses are usually shared with Downtown Disney meaning multiple stops. Secondly, the ride back to your resort when your wet from your day’s venture at Typhoon Lagoon is far from comfortable. The seats are hard plastic and usually the air conditioning is on full blast, the makings of a chilly, miserable ride back to your resort. I encourage guests, especially with kids, to drive themselves to Typhoon Lagoon; but if this isn’t a possible option for you, be sure to change clothes before heading to the buses and plan for your commute to be longer than expected.

So these are a few tips to help you be Disney Savvy when it comes to Disney’s Typhoon Lagoon! Do you have any water park tips to share? Or are you considering planning a visit to Typhoon Lagoon? Let me know! 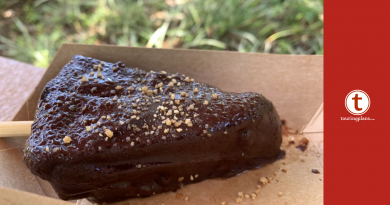 Cool or Not? Key Lime Pie at Blizzard Beach