So, you’ve decided to runDisney. Well, congratulations! Whether this is your very first race or you have 50 races under your proverbial water belt, runDisney races are like nothing you can experience anywhere else.

runDisney events stand out for the obvious reason of on course entertainment (it is Disney, after all). Depending on which race you choose (we’ll get to that), you can meet a whole host of characters you might not see during your casual park touring. Even more so than entertainment, Disney races are extremely popular because, let’s face it, you’re running through friggin’ Disney World (or, Disneyland but we’ll get to that too!). If you grew up going to the parks and you’re a total fanatic, you get to see a side of the World that you simply can’t see any other way. If it’s your first visit, well, you might not want the surprises ruined, but wow you’re in for an amazing journey.

There are so many races from which to choose, and lately runDisney has been adding some new events here taking away some events there with regularity, but it’s important to have at least a vague idea of what you’re getting into. Let’s start at the beginning, on our marks, get set, let’s go!*

*Please note that although I would love to, I am not able to run every race every year (I did it once, though!). Courses are subject to change, and experiences may vary since the time I ran most of these races (2014/2015). Please be sure to check course maps before registering, as race details are subject to change from year to year!

Walt Disney World Marathon Weekend:
This takes place in January at the Walt Disney World Resort in Orlando. All are morning races, with start times ranging from 5:00 am-6:30 am. The weekend consists of a 5k, 10k, Half Marathon and Full Marathon.

As far as 5Ks go, this course will take runners out of the Epcot parking lot, backstage behind Epcot, and then through World Showcase. It’s pretty cool to run through World Showcase, but this weekend wouldn’t be my number one pick for a 5k or 10k for a few reasons: a) better courses exist; b) this 5k and 10k tend to sell out pretty fast because runners who want to participate in the Dopey Challenge (we’ll get to that) will be registering for these events, too; c) these are on a Thursday and Friday, which might be tough days for some.

Interested in a Half Marathon? This would be a great first half marathon to run! The course is amazing in that you run through the Magic Kingdom and through (yes, through) Cinderella Castle. You’ll probably cry. The Half Marathon also fills up with Dopey and Goofy (we’ll get to that one too) participants, but there is room for a lot more people as the Half Marathon has a larger capacity than the 5 or 10k.

Have you run a Full Marathon yet? Do you want to? Then this weekend is yours! runDisney features one Full Marathon on their calendar, and it’s held during this weekend (hence the name, Marathon Weekend). There are a few reasons why this should be your first Full Marathon: it’s flat; chances are you’re a Disney fan and this course gives you the opportunity to run through all four theme parks; there are lots of water stops, food stops, medical tents, and an insanely efficient medical staff on hand throughout the entire event; finally, Mickey freaking Mouse will be there at the end, and you can high-five him! Also, the medals are pretty sweet!

Goofy? Dopey? What’s that? Glad you asked! The Goofy Challenge is when you commit to finishing the Half Marathon, followed by the Full Marathon the very next day! The Dopey Challenge is running all four races during Marathon Weekend (5k on Thursday, 10k on Friday, Half Marathon on Saturday, and the Full Marathon on Sunday). Daunting? It is: largely due to the really early wake up call for each of these races. Rewarding? Probably one of the proudest moments of your running career. Recommended? Of course, but you really have to train. Really. Please train.

Princess Half Marathon Weekend (Walt Disney World):
This weekend in February takes place at the Walt Disney World Resort in Orlando. It features a 5k, 10k, and Half Marathon (Friday, Saturday, and Sunday respectively) all of which are morning races with 5:00 am-6:30 am start times. Runners looking for a first race of any distance other than 26.2 in Florida should definitely consider this weekend! Every course is identical to its Marathon Weekend counterpart, but with warmer temperatures and a little extra registration time, this could be your weekend to shine! And run! This was my first ever race ever back in 2011, it holds a special place in my heart so I will encourage most first-timers to make this their first race. That means you!

Expedition Everest Challenge:
RIP. Maybe this challenge will be back…someday. This event is not on the 2016 calendar, but if it returns you should know what it’s all about! Here are the basics: Run a 5k through Disney’s Animal Kingdom (at nighttime!), then complete a set of scavenger hunt/trivia type questions. Essentially, the entire evening is roughly a 10K distance since participants need to circle back through the park once the 5k portion is completed. Oh yeah, and the 5k has obstacles like bails of hay to jump over, tires to run through, and a net to climb under. It sounds like a nightmare at first, but it’s actually quite fun. Here’s hoping it returns in 2017!

The Neverland 5k is the most perfect 5k one could ever hope to experience. Corrals extend from Sleeping Beauty Castle down Main Street, and the whole event kicks off with a fireworks display. Yes, fireworks for a 5k, at 6 in the morning. The course snakes through both Disneyland and DCA, ending near Voyage of the Little Mermaid and it’s a 5k so the course keeps runners in the parks for the entirety of the race. The 10k course is pretty similar in that runners still run through both parks, there’s just a little extra thrown in to double the distance. The Half Marathon runs through both parks as well, which is awesome! There is quite a lot of time to be spent on the streets of Anaheim where entertainment and cheering crowds of people can be limited, or nonexistent at times, but there’s really only one hill to worry about, so that’s a winning course in any runner’s book.

Disneyland Half Marathon Weekend:
Yet another weekend featuring a 5k, 10k, and Half Marathon! These races all start in the morning at the Disneyland Resort (obviously). The 10k and Half Marathon combined make up the Dumbo Double Dare for which there is a challenge medal. This 5k and 10k both span both Disneyland and Disney’s California Adventure, but the courses are different than the Tinker Bell 5 and 10k. The themes for these races has been different for the last 2 years, which is a pretty cool surprise to find out!

The Half Marathon portion runs through both parks, as well, but it does so at the very beginning of the race. The inside-the-parks portion is basically complete at mile 4, but there is Angels Stadium to look forward to where runners get to run on the warning track. It’s a pretty amazing pick-me-up at mile 9! The best part of this race, though, has to be the Disneyland Half Marathon medal. It’s beautiful, it’s gold, it’s the Disneyland “D,” and it’s absolutely gorgeous.

Happy Haunted 5k Trail Run and Tower of Terror Ten Miler:
Also RIP for 2015. This Twilight Zone-themed 10 mile run in Florida is not on the race calendar for 2015, but perhaps it will be back someday (maybe once the Hollywood Studios construction is finished)! The nighttime race both starts and finishes in Disney’s Hollywood Studios, with a DHS afterparty to follow. The course was, unfortunately, not much to write home about as runners spend most of their time on Osceola Parkway which offers little to look at. The course did, however, take runners to Wide World of Sports and allow them to run on the warning track of Champion Stadium (one year, there was a giant Tesla Coil on the infield!).

The Happy Haunted 5k Trail Run always took place the morning of the Ten Miler with an off-road course at Wide World of Sports. The Ten Mile distance is a great way for new runners to attack their first race, hopefully this one will be back in the future!

Mickey’s Jingle Jungle 5k and Wine and Dine Half Marathon (Walt Disney World):
Love Christmas? Love Animal Kingdom? Then please consider Mickey’s Jingle Jungle 5k. This morning race also might — just might — feature snow flurries at the starting line, too! Later that day is the Wine and Dine Half Marathon. Both races take place at The Walt Disney World Resort in Florida.

The Half Marathon hits three out of the four theme parks (Animal Kingdom, Hollywood Studios, and Epcot) in just a 13.1 mile distance! This race takes place at night, and finishes with an afterparty at Epcot. Cool side note: This course is kind of similar to the second half of the Full Marathon. Those considering the Full Marathon might find this race to be a helpful preparation for the second half of the Marathon. The course is not exactly the same, but all of the same major landmarks are present.

Avengers Super Heroes Half Marathon Weekend (Disneyland):
The final race of the calendar year takes place on the left coast and currently features a 5k, 10k, Half Marathon and, of course, a challenge medal!  Completing both the 10k and Half Marathon will earn runners the Infinity Gauntlet Challenge medal. These are all morning races, currently in November. This 5k and 10k cover both Disneyland park and DCA. The Avengers Half Marathon course is very similar to the Disneyland Half Marathon course. Runners wind through both parks first, then spend a lot of time in Anaheim and reach Angels Stadium at mile 9. There was some amazing super hero fan cosplay on this course in 2014, which really helped keep the entertainment level up!

runDisney race courses all have unique elements about them. Even if the courses are similar, no two races are alike due to the entertainment, the cheering crowds, and most importantly you and your fellow runners. Each race is meant to be a fun experience for everyone. If you’ve never run before, but want to, these races are some of the best places to start.

See you at the finish line! 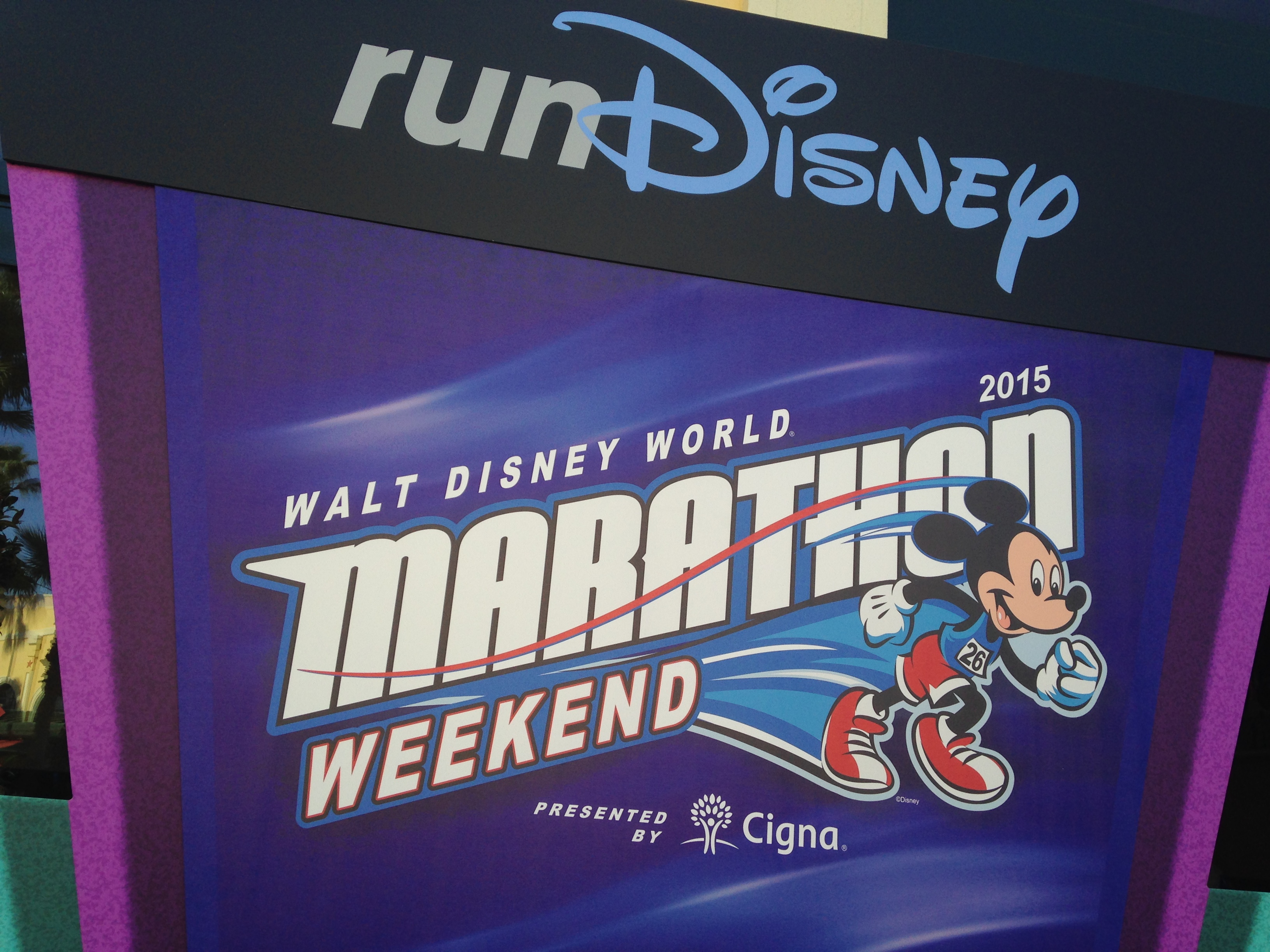 2 thoughts on “So, You’ve Decided to runDisney: A Starters Guide”