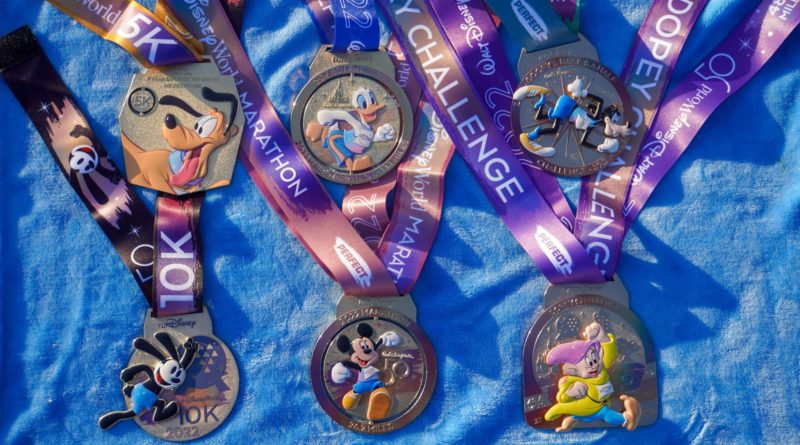 This week’s SATURDAY SIX takes a look at runDisney! Before we start, a little backstory on this article. For years I have wanted to do an article on runDisney. My own experience with runDisney began and ended with the Castaway Cay 5K we did on the Disney Cruise that I sailed on. For me the run itself was fine, but I was much more interested in the Castaway Cay 5K merchandise available on the island. That said, I have many friends in the community who absolutely LOVE runDisney. For whatever reason, every time I was ready to do a SAT 6 on runDisney, something would come up to derail the plans. I resolved to have an article covering the 2022 runDisney marathon weekend (which took place January 5th-9th). Well, I didn’t think it would make sense to do an article on the demise of Shrek 4-D outside of the week it closed, which was the week following the runDisney marathon. So I pushed the 2022 marathon weekend article back one week and was ready to go when out of nowhere the story of the Figment Popcorn Bucket went too crazy to ignore.

So here we were again. It had already been several weeks after the marathon and an article covering that would be beyond dated. So it was time to shelve the runDisney article again. NAY NAY. If I don’t do something now, I’ll always find a reason not to do it. So put on the tracksuit, lace up on those running shoes, and let’s take a more general look at runDisney (with a whole bunch of 2022 marathon mixed in!)

The runDisney weekends kick off with an Expo held at the ESPN Wide World of Sports. The Expo is free for everyone, but mostly is only attended by runners and eBay resellers. The Expo is where runners pick up their bibs, and this is one area where Disney is extremely strict. Each runner must personally pick up their bib with a photo ID. There have been occasions where race bibs have been stolen, a story we covered in the 2017 Theme Park Turkeys of the Year, and one of the biggest rabbit holes I’ve ever been down was discovering the shadowy world of bib thieves.

After picking up their bibs, runners can interact with a large variety of vendors at the Expo, along with purchasing exclusive runDisney merchandise.

You can see in the picture below that the Expo contains several photo-ops, and also has Disney photographers available.

One popular photo-op is the ability for runners to get their picture taken with large numbers indicating the amount of miles they will be running during the event.

Some numbers might seem odd, but they are for people doing multiple races and combining the mileage.

There are a limited amount of food and drink options available during the Expo, generally themed to the races themselves. Although 2022 did have a bucket of popcorn with chicken skewers stuck into it for reasons unknown.

The official runDisney merchandise is always a huge draw at the Expo.

runDisney has some super fun-shirts.

The Oswald imprint inside this shirt is a level of detail generally reserved for things like Pandora: The World of Avatar or Star Wars: Galaxy’s Edge.

For pressed penny aficionados like myself, the Expo started offering pressed pennies back in 2017.

We have seen a whole bunch of runDisney merchandise at the Disney Outlet Stores over the years. Here’s a sample of some of the items that we saw.

Once it is time for the actual races themselves, Disney goes all out. With race announcers and DJs, what would be an interminable wait before each race starts is actually an enjoyable experience.

We have done our fair share of article on photo-ops with characters at both Disney and Universal. For some, photos with these characters are just as important to their theme park vacation as rides and shows. The runDisney races have characters and photo-ops throughout the courses.

Various photo-ops can be moved around depending on the race.

Many times these are characters you don’t see that often at the parks, if at all.

One thing to keep in mind is that some of these photo-ops can be popular.

But it’s not every day you can take a photo with a bonafide Theme Park Turkey of the Year Award Nominee.

runDisney has had race weekends themed to the Marvel and Star Wars brands.

Another huge part of the runDisney allure is the fact that you are running on Disney property! From the 5Ks all the way to the full marathon, the runDisney races cover a lot of Walt Disney World’s 43 square miles. Let’s hop into the blogger-in-the-sky copter with @bioreconstruct to get a bird’s eye view of what this means….

The finish line of the WDW marathon is in the EPCOT parking lot.

Expanding out, we can see that after passing over the finish line, finishers walk through a barricaded route. Here they will be able to get some post race food along with meeting friends and family members. At the top right of this photo are busses with bring guests back to the Disney resorts.

Here is the finish line from a runner’s POV.

runDisney events often give runners a unique look and experiences at Walt Disney World that most of us day guests will never see.

How many times can you be on the monorail and see something like this below you?

runDisney events are one of the only times you’ll be able to see the Harmonious barges using their fountain effects during the day time.

Because of the great weather, the fountains created a rainbow. 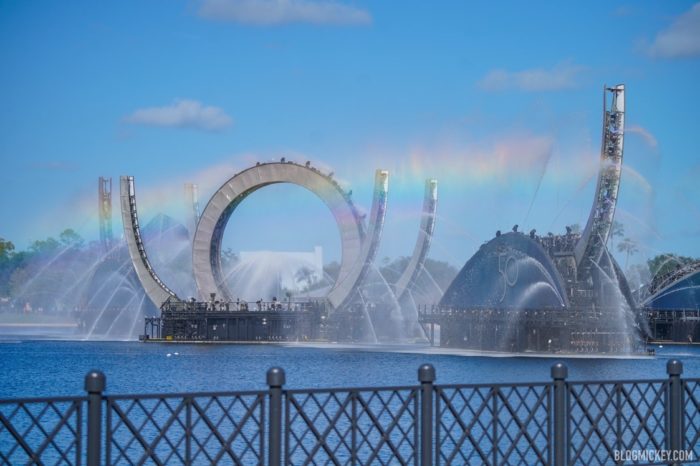 Runners in a runDisney race are expected to keep up a 16 minute/mile pace. “The Balloon Ladies” are runDisney participants with Disney balloons that are the unofficially the visual end of the race. Fall behind the balloon ladies and you will most likely be exited from the course by other race officials. Keep in mind, many people enjoy taking photos throughout the course, and as we saw above, sometimes these can take a little time…

The bus in the middle of this photo is used to transport runners who have been exited from the course to the finish line area.

Balloons are also used to give participants a bearing on where things are located, such as event busses to take them back to resorts.

There are some out there who will tell you that the act of running itself is its own reward. The adrenaline, the exercise, and the release of endorphins will make you feel better than ever. To that I say NAY NAY. The reason to run is for the medals.

runDisney medals are straight up E-Ticket

You have to love runner Heather Winfield, who has her nails match the race’s theme.

What’s even better than the medal? Getting your picture taken WITH the medal!

Duh, take a picture with your medal next to a PIZZA CONE.

A pizza cone food truck was available post race for the 2022 marathon and should basically be located at all the four Disney parks 365 days a year. The pizza cone is essentially a reimagined version of the classic Disney HANDWICH.

Back at home, many Disney runners display their hardware.

Or, if you’re like @bioreconstruct, you have too many to display…

So there you have it: The SATURDAY SIX Takes a Long Awaited Look at runDisney! See you next weekend for the latest installment of the SATURDAY SIX, where we’ll look at something fun from the world of Disney and Universal. If you enjoyed yourself, be sure to check out the THEME PARK ENJOYMENT INDEX, giving a monthly recap of all the theme park news you need to know (and a lot more you don’t need to know, but we’re gonna tell you anyway). You can also follow Your Humble Author on Twitter (@derekburgan).

The runDisney Experience: Planning a runDisney Trip (by Jamie Rosemergy)

Dos and Don’ts at a runDisney Expo (by Kristina Murphy)

Lessons from my 1st runDisney Event (by Kylene Hamulak)

NEXT WEEK… The return of an annual tradition. Kicking off with ROB YEO!

8 thoughts on “The SATURDAY SIX Looks at the runDisney Phenomenon”